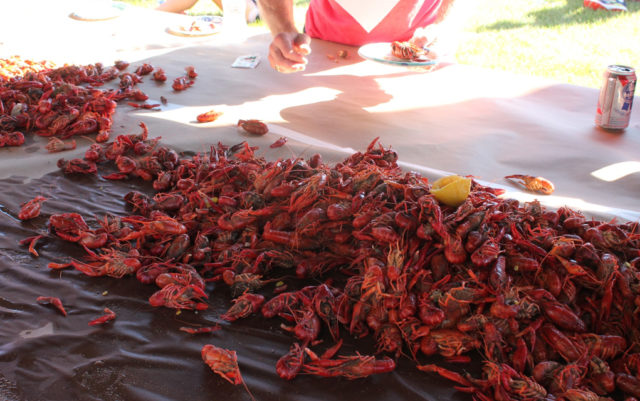 Most people tip-toe up to the table and say, ‘Woah, this is weird. Crawfish? Like mini-lobsters?’ And they don’t know how to eat them,” says David Janowiec, who’s hosting the Erie Firecracker, a combination 4K race, party and crawfish boil, on July 1. “But then you get a handful of people who know what they’re doing. They grew up in the South, and those are the people who sign up for the race just to eat the crawfish.”

Janowiec laughs thinking about those people. Well, one of them.

“We had a woman last year who brought her own melted butter in a Tupperware tub. My wife gave her a big hug. That’s what you want,” he says.

The crawfish boil at the Erie Firecracker began in — you guessed it — northern Minnesota. That’s where Janowiec grew up and founded his event company, The Recess Factory. After about five years of hosting the race, one with quirky events that brought thousands of people to a small Minnesota resort town, Janowiec had an idea to make it quirkier.

“My wife is from New Orleans. I was down there with some of her family for a crawfish boil, and it blew me away because I’d never seen anything like that before,” he says. “I was like, ‘Let’s do this.’”

Janowiec and Co. eventually relocated to Colorado, and when the Erie Parks and Recreation Department was looking to deposit its 4K, the Firecracker, on a private event company, Janowiec jumped at the chance.

At first, Janowiec tried to take on the duties of running the race and the crawfish boil. But a match was made in Cajun heaven when Lee Carter, the owner of Miner’s Tavern in Erie, and southeastern Louisiana native, said he would sponsor the crawfish boil and, most importantly, cook them.

“I was doing the YouTube thing,” Janowiec says about trying to cook the crawfish himself. “Calling my wife’s friend and her husband. But it’s time-consuming. You have to know what you’re doing to get the right amount of seasoning, the right amount of veggies and the right temperature in the water. … It’s nice to have [Carter]. He takes more precautions, and it takes a lot of pressure off of me.”

Even though you can set out a trap in a ditch (if you follow the rules) and catch some Colorado crawfish, it’s easier to have them shipped in, live, from Louisiana overnight.

“We’ll get them on Saturday about 11 a.m., then they’ll go the fridge,” Janowiec says. “Usually they’re in a huge Styrofoam cooler or a big cardboard box lined with plastic or ice. They come in nets, and they’re all live crawling around in there.

“You hose them all off, soak them in water, drain the water so it rinses off the Louisiana dirt. And then in the meantime, you’ve got your corn, you’ve got your potatoes, onions, your seasoning. Sausage if you want. Mushrooms. All that stuff already going in the pot, and then once you’re so far along boiling all that stuff, that’s when you drop in the crawfish.”

Janowiec says the patrons at the event will go through a couple hundred pounds. Pots are rotated throughout the afternoon to make sure there is enough to feed everyone. 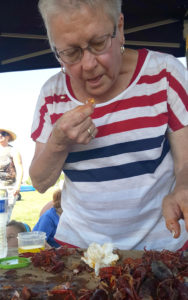 Anyone who has had the pleasure of partaking in a crawfish boil knows that, for a beginner, it takes about a dozen crawfish to get the hang of cracking its shell. Janowiec and Carter will be on hand to help crawfish virgins out with the de-shelling and slurping.

If you do go to the crawfish boil at the Erie Firecracker, trust Janowiec, really, and suck out the head while the meat’s still in your mouth. All the spices and juices that mix together as the crawfish cooks get caught up in the head, so you’d be missing out on about 60 percent of the flavor.

If you’re still squeamish, however, Janowiec thinks watching children twist, crush and slurp will inspire you to try it out.

“We’ll invite ten kids up to the stage, and they stand and each grab a crawfish,” Janowiec says. “A 3-year-old, a 5-year-old. One 10-year-old. Usually we try to find the really young ones who want to do that, and we’ll have those kids teach the adults how to eat a crawfish. We’ll say, ‘Hold the crawfish out in front of you, twist the head off and pull.’ A lot of kids think it’s a bug, so they’re not scared of it like the adults are.”

The crawfish boil is the ultimate community event, with people taking hours to shell and eat crawfish while they sip beer and share stories. That makes it ideal for Erie, Janowiec says, because of how “family-friendly” the community is. Too, with the 4K and other races, the slip-and-slide finish, the foam pit and other recreational oddities, Janowiec says it’s an ideal event for Colorado.

“Fitness and beer and food go together well here,” he says.

Entrance is capped at 1,500 heads (of people). To register, go to coloradofirecrackerrun.com.