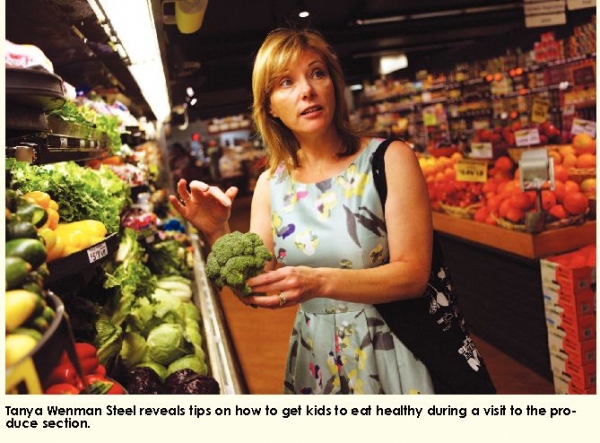 The nose-wrinkling and pouting that create dinner table havoc.

She’s mom to 12-year-old twin boys, co-authored the tip-packed Real Food for Healthy Kids cookbook with Tracey Seaman and is editor-in-chief of epicurious.com.

As good-food guru at the website, she’s traveling this summer for Epicurious’ annual farmers’ market tour and has participated in food festivals at Walt Disney World.

And it’s why she has talked and talked with parents about picky eaters (“the world’s most ornery food critics”), getting young kids in the kitchen and to the market, and her “personal obsession” with healthful eating — that is, healthful food plus “a healthy attitude about food.”

Here are a few of her tips for parents: • Healthy attitudes start early: “At 2, have them sit on the floor and tear lettuce. You can have them wash sugar snap peas. You can have them stir,” Steel says. “At that age, it’s more about the fun. You don’t actually care if they get the lettuce washed. Try not to worry about the mess, which will go on for the next 10 years. It’s more about creating a fun environment and warm memory and a Pavlovian instinct that the kitchen equals fun.”

• Take that attitude to the market: “Teach kids that you should always shop around the perimeter of the store. That’s where the freshest things are,” Steel says.

Ask them to pick out fruits and vegetables with intense colors (they’re typically the most nutritious) but also ask them what they find appealing.

She suggests involving them in the decisionmaking and preparation, with questions and followup comments, such as: “Do these Brussels sprouts look really fun to you? We can make them taste really good. We can roast them.”

“Part of that ‘I don’t like that’ is ultimately a power issue,” Steel says. “You don’t want it to be. It’s very important that food is food. It should not be about taking or giving power.”

• Introduce a range of foods: “Parents say to me, ‘My kid doesn’t eat.’” When Steel asks them if they eat — and sing the praises of — healthful foods such as spinach or seven-grain bread, the parents admit that they don’t.

“And there’s the problem,” Steel says. “You have to be the ultimate PR person for spinach. You’ve got to be a spokesperson for the deliciousness of fresh food. And that means not just talking the talk, but walking the walk and eating that way every day in front of them.”

• Start ‘em early: Despite “terrible 2 moments,” Steel says, “that’s the time to put spinach pie on their tray when they feed themselves because they will just eat. There have been studies that show kids need to try things over a dozen times to really get used to the flavor, the taste and the smell.”

• Challenge teens: Say to teens (particularly boys), “I think I’m going to challenge you to make this taste really good,” she says. “Use the word ‘challenge’ and try to appeal to their competitive side.”

• Institute “no, thank you” bites: “They just have to taste one tiny bite, that’s all we’re asking and that’s the rule of the house,” she says. “I am a huge proponent of ‘You’re the parent; they’re the child.’ We’re not negotiating. We’re not short-order cooks. Nobody should be making six meals.”

• Foods kids like: Steel suggests edamame (fresh soybeans), popular as appetizers and sold at food courts. “If you make edamame, you just put it in the microwave and add just a little bit of coarse salt,” she says. “It’s like eating potato chips. Some parents would never think of giving them to kids, but they should. And raw broccoli? Have them wash them and pull out the stems and make a dip for it.”

• Watch portion sizes: “Portions are incredibly important. Portions are
probably half of what parents think they should be,” Steel says. “You
should actually be giving small portions, particularly when it’s a
treat.

“It takes
20 minutes for the stomach to tell the brain it’s full. So I always
start my kids with fresh veggies. … By the time they’re eating dessert,
hopefully it has been 20 minutes, and they’re going to say, ‘I don’t
need another thing to eat.’ But if they do, give them whatever fruit is
in season that will satisfy the sweetness they’re craving.”