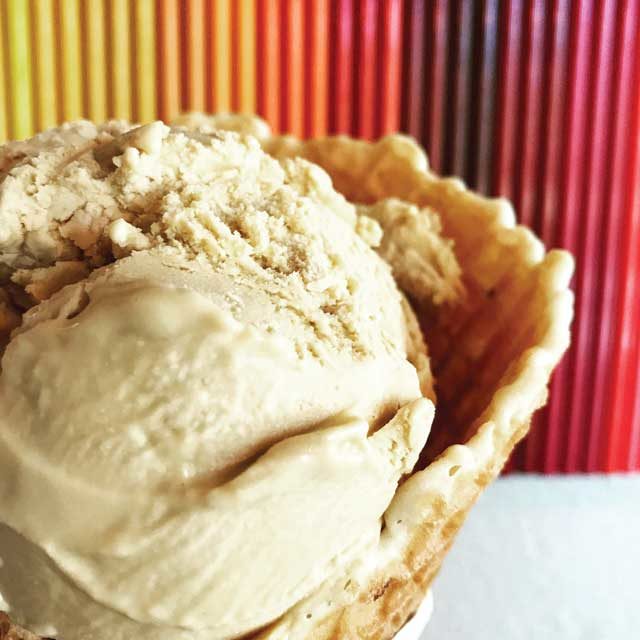 Heifer and the Hen

Heifer and the Hen, an artisan, organic ice cream shop in Boulder, is known to carry some envelope-pushing flavors (along with vanilla and chocolate).

But the most enduring and celebrated flavor at Heifer and the Hen is a simple one that arose along the beaches of Vietnam when Clark and his wife, Bryce, were on vacation.

“We were walking near the beach and there would be these little coffee shops in somebody’s house. We had cups of this extra intense Vietnamese coffee with sweetened condensed milk. I didn’t like Vietnamese coffee when I’d tasted it in Denver, but this was a strong flavor without being bitter,” Clark says.

However, Clark has long had an affinity for coffee ice cream, and for the family-owned ice cream parlors that were a part of his New England upbringing.

“I found myself in love with Ben & Jerry’s back when it was a local brand. Even as an 11-year-old kid I liked coffee ice cream,” he says.

There are a number of secrets to making great coffee ice cream at home, Clark says. For his remarkable Vietnamese coffee ice cream — an original flavor when Heifer and The Hen opened three years ago — he doesn’t use brewed coffee or concentrate.

“Adding any extra water leads to crystals in the ice cream. We use Vitamin Cottage’s organic freeze-dried coffee. We reconstitute it using cold brew coffee. Condensed milk gives it extra creaminess and a little extra sweetness,” he says.

He recommends making ice cream the day before you want to eat it — something he admits is easier said than done. “It really should age for about 24 hours. It improves the flavor and the scoopability,” he says. Freeze any mix-ins first and add them late in the ice cream’s freezing process to avoid melting.

My own affinity for the bitterness of coffee also started young in New England with creamy iced coffee, coffee Dannon yogurt and coffee Häagen-Dazs ice cream, once the gold standard for coffee ice creams but now just an afterthought.

On the rare occasions when I hit a scoop shop, it’s almost always because I need that magic meld of creaminess, sweetness, bitterness and chill plus a caffeinated buzz.

Here are some of my other coffee ice cream favorites. Check with individual shops for flavor availability.

I was raised on instant/freeze-dried coffee, Folgers and Taster’s Choice, mainly, but left it behind long ago for craft or at least drip coffee until I tasted the new crystallized coffee from Boulder’s Ozo Coffee. The medium-roasted coffee is carefully freeze-dried and makes a remarkably good cup of hot or iced coffee. This is the first “crystalized coffee” I’ve ever sampled that comes with tasting notes mentioning “rich molasses, black cherry, viscous body, lively acidity and a lingering finish.” Packed in airtight tubes, it has a premium price but is still less expensive than a cup at a coffee shop and is highly recommended for backpacking, road trips and airline flights.

I claimed in a recent Nibbles column that Boulderites had been dining on the wrap-around porch at the Chautauqua Dining Hall since 1898. “Well, not really. Chautauqua originally did not have the veranda,” notes William Arndt, who sent along a historic porch-less photo of Chautauqua. The porch was added in 1901 and the menu did not always include current appetizers like crispy Brussels sprouts. “Chautauqua was like a summer camp mess hall. Women in white uniforms serving fried chicken. Until the late 1970s, I don’t remember eating on the porch. No one thought of letting people dine outside,” Arndt writes.

A tip of the straw hat to Belle Anderson of The Fresh Herb Company, a pioneering Boulder County Farmers Market member who recently passed away. Belle was always at the market regardless of rain, cold, wind or snow. … Punch Buggy Shave Ice with flavors from lilikoi to pickled mango has opened at 640 Main St., Louisville. … Coming soon: Torchy’s Tacos, 2805 Pearl St., in the former Turley’s location. … Tastes from Mercantile, Flagstaff House, Basta and Ras Kassa’s are on the menu for the Hot! Hot! Hot! Flatirons Food Film Festival benefit on July 9. flatironsfoodfilmfest.org … The acclaimed documentary The Biggest Little Farm will be screened during the inaugural Boulder Environmental/Nature/Outdoors Film Festival July 10-13. boulderenoff.org

“We shall live well — we shall live very well … The months between the cherries and the peaches are brimming cornucopias which spill fruits red and purple, sombre-bloomed and black.” -— From “Wild Peaches” by Elinor Wylie