Bryce Licht never saw it coming. He had left Colorado, left CU, traveled around South America, moved to Los Angeles, then back to Boulder, and had applied for a grant to do graphic design for small businesses in Europe. He got the grant, but it wasn’t where he wanted to go — Spain, as he had learned Spanish throughout his travels — it was to the boot a little to the east.

Yes, Licht was the only person ever to be bummed out to get a grant to live and work in Italy for a year.

“I knew nothing about Italy,” he says. “I knew very little about Italian food. I don’t think I knew what gelato was at that point. Maybe I knew the word, but I definitely had never had it.

“Then I got to Italy and just fell in love with it.”

Indeed, he fell in love with all of it — the small community outside Venice in northeastern Italy, in which lived; a woman, Giulia, whom he eventually married; and, of course, the region’s decadent gelato.

So one year in Italy became three and a half, and before Bryce and Giulia got married, they took a trip back to Boulder and noticed no one was doing gelato like the Italians. And given the appeal of graphic design jobs were losing their luster — “Sitting in front of a computer for 12 hours a day is not amazing,” Licht says — the two plotted how to shift into the gelato game.

As luck would have it, the first graphic design client Licht had on his work grant in Italy was a gelato store, whose owners were happy to teach Bryce and Giulia how to make the frozen treat.

It was harder than it looked.

“They showed us. More importantly they showed us how to formulate recipes,” Licht says. “What a lot of people don’t understand about gelato … is it’s kind of like chemistry. It’s not like you can just wing it and make what you want and hope that it’s going to work. There are a lot of things to consider, and it comes down to a balance of water, solids, fats, sugar — different types of sugar have different effects on the gelato; how hard it’s going to freeze, how soft it’s going to freeze. So you have to know how to do that to even create a new recipe.

“People ask us, ‘Did somebody pass you down the recipes, are they like old family recipes?,’ Well, kind of, but that’s only a starting point. Even if you had a recipe, if you ever wanted to alter it or make a new one, you’d have to understand those principles of how to balance a recipe. That’s what they taught us.”

There was a lot of trial and error in the early going. When the Lichts returned to Boulder, they bought a gelato maker and rented a spot in a commissary. They began selling their gelato wholesale, then secured a booth at the Boulder Farmers Market. Those humble beginnings provided several benefits: the ability to work in small batches, connections to the local farming community and the chance to see how people received their gelato.

It also provided the chance for screw-ups. A batch of Palisade peaches were wasted when they dumped too much rosemary in the gelato mix, “where it actually, like, burned your throat going down,” Licht says. But with time, the edges of the business and the craft of gelato-making smoothed out. Just five or so years after starting, they have their original brick-and-mortar shop on Pearl Street, Fior di Latte, and then another just a few blocks west on Pearl. Two shops followed in Denver, and more are in the works. Licht estimates they have about 140 flavors rotating throughout the year, which they base on seasonal availability of ingredients and start developing weeks before they hit the gelato bins. Some unique current flavors include coconut lime ash, avocado strawberry, forest berries, mango and mescal, Thai iced tea, and one made with blackberry jam and bits of kouign-amman from Moxie Bread Co.

That diversity is a uniquely American spin on the Italian treat, Licht says. It’s a natural result of Bryce and Giulia’s relationships with the food and Italian culture.

“My wife, she’s the traditional Italian, wants it to be the best representation of her cuisine. … I like to push the limits a little more,” Licht says. “I think that’s kind of a cool thing about American cuisine; chefs in the U.S., they have a little bit more room to play around with tradition, whereas in Italy, we serve some flavors here that Italians, it’s changing now, but six years ago, you’d name a flavor like what we’re doing now and they’d say, ‘That’s not gelato. Why are you doing that?’”

One such Italian critic is Giulia’s father.

“Her mom loves everything we do” Licht says. “Her dad is incredibly traditional. He comes into the shop, he goes, ‘Where’s the hazelnut, where’s the pistachio?’ He doesn’t want to hear about salted caramel. The Italians that live here though get it a lot more. They like the experimentation.” 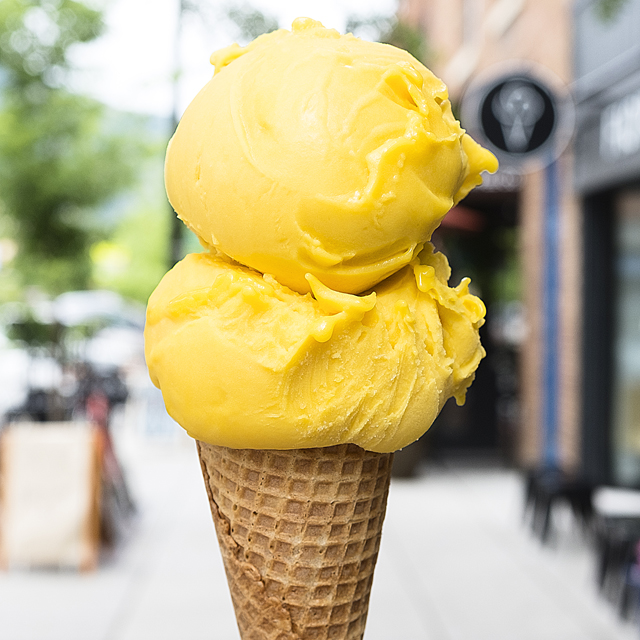 Too, for many Americans, their perception of gelato is informed by trips they’ve taken to Italy. Licht says he’s had a lot of it, and he thinks the product Fior di Latte puts out is comparable with anything you can find overseas.

“Gelato in Italy, in general it’s hit or miss, and people think, ‘Oh, well, I went to Italy, and we went to Florence and Rome and Venice, and we got gelato three times a day, it was amazing.’ Yeah, I mean everything’s going to taste amazing in Rome, Florence and Venice because of the context. But a lot of gelato shops in Italy, it’s kind of like … coffee here, where there’s a lot of really good coffee and there’s a lot of really bad coffee, and the same is true for gelato in Italy,” Licht says.

Gelato also carries with it, in the U.S. at least, a perception that because it’s sultry and indulgent-tasting and available only in “specialty” stores and aisles, that it’s less healthy or more expensive than ice cream. Licht says, however, the only real difference is in the ratio of the recipes: ice cream has more cream than milk, gelato has more milk. It actually lowers the amount of salt and fat.

So yes, gelato is a food that has a lot of strings attached, and a lot of expectations for what it should be. But the best thing about it — and the gelato at Fior di Latte — is that you take one bite, and none of it seems to matter.