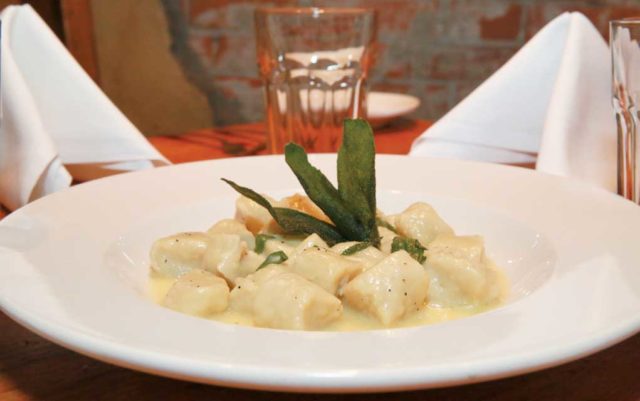 Argue if you will, but no one knows how to prepare authentic Roman Italian food like a genuine Italian, such as Boulder restaurateur Marco Monnanni. The Rome native is currently the executive chef at the infinitely cozy Sforno Trattoria Romana on Pearl Street, but he’s known for dishing out Italian food (famously his housemade mozzarella) around Boulder County at Pane e Vino, Acqua Pazza, Bacco Trattoria and Mozzarella Bar and Parma Trattoria Mozzarella Bar.

Bacco and Parma were the first two mozzarella bars in Colorado, dishing out in-house and Italian-imported mozzarella that could be prepared with a number of condiments.

Sforno offers a softly lit Tuscan atmosphere, replete with exposed brick walls, wrought iron gates, wooden shutters, honed travertine tile and a stone fountain bubbling gently in the center of the dining room. Flowers flow from hanging baskets on a mock balcony overlooking diners, and lights strung above the main dining room provide an al fresco ambiance. On a summer night, a real al fresco meal can be taken on Sforno’s patio, sipping a glass of wine, munching on warm bread with an herby oil for dipping, as tourists and locals stroll the Mall.

The word sforno means “from the oven” in Italian, a fitting name for a restaurant built around a wood-fired oven that turns out crispy-crusted pizzas during lunch and oven-baked gnocchi alla romana for dinner.

Gnocchi alla romana is an old dish, dating back some 2,000 years or more. Some sources say the word gnocchi comes from an Italian word nocca, meaning knuckles, or the Lombard word knohha, which is a knot in wood). The thick, soft dumplings were introduced to Roman troops as they spread across the European continent conquering lands for the empire. Then they were made from semolina porridge-like dough mixed with eggs.

The potato-based gnocchi is more recent, cropping up after the potato was introduced to Europe in the 16th century. This type of gnocchi became very popular in Latium, the region of central western Italy that became the capital city of the Roman Empire. It’s fitting that this is the type of gnocchi served at Sforno.

Now, gnocchi is intended as a first course — primo piatto — in place of soup or pasta. However, these starchy delights are quite filling, so some might consider them a meal on their own. This is the definition of comfort food.

Sforna offers gnocchi alla romana with either butter sage sauce or a four-cheese sauce. But for me, it was the sage that called out, and reminded me of very traditional gnocchi dishes that were prepared by nonna’s in my Waldensian-settled town in western North Carolina.

Gnocchi are really quite simple ingredient wise; they can be made of just potatoes, flour and salt (though many elaborate on this), but perfect gnocchi results from taking just the right steps in the process of cooking and combining these ingredients.

The dumplings at Sforno keep to this simplicity while achieving the hallmarks of a finely made gnocchi: They are tender and light, yet sturdy enough to hold up to the sauce. I’ve read that it’s imperative to bake the potatoes, not boil them, to create the perfect gnocchi, as water is the death of good gnocchi dough.

Whether as a meal on their own or an opening course, its worth a stroll down Pearl Street for Sforno’s classic gnocchi.

Mandala Infusion is here to serve

Mumtaz Mediterranean Food offers a taste of the Levant