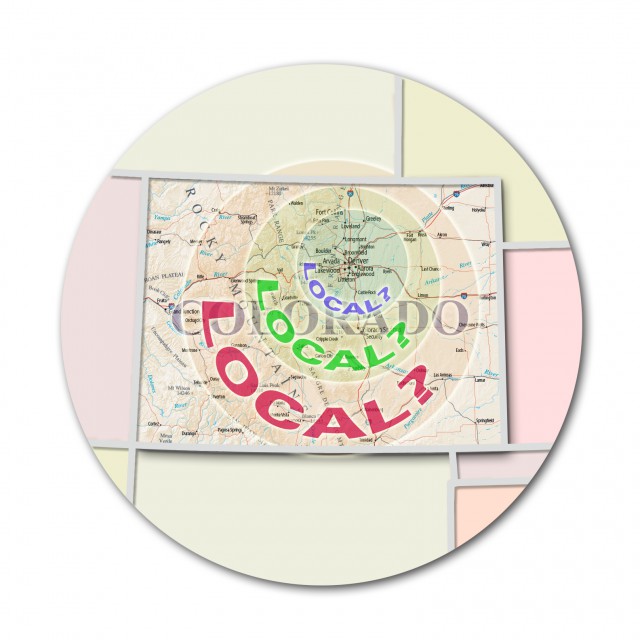 This is the first in a two-part series addressing one of the central challenges of the local food movement: what exactly the word “local” means on the consumer end of the market. The second part will explore what it means for food producers.

According to the New Oxford American Dictionary (which actually selected the word “locavore” as its 2007 word of the year), local food is that which is sold and consumed within a 100-mile radius from where it was grown. But ask 10 people what they consider to be “local food,” and you’ll probably get 10 different answers. Some see this catchall word as geography, while others consider steps removed from the producer to define what is locally grown. The lack of an agreed upon standard for what constitutes local has made research and data about the growing local food movement challenging to interpret, as some data uses mileage, while others consider direct-to-consumer sales or size of the farm as a measurement.

“Local’ is a pretty specific word,” admits Paul DiBona, a produce manager for Whole Foods in Boulder, who still finds the actual meaning individuals give to the word somewhat subjective. “Here at the store, we generally consider anything grown within the state as local food.”

This definition is shared by many of the major retail grocers in the country, but causes some consternation due to its nebulousness and variation by geography. Berries from Rhode Island travel a short dis tance to markets in Massachusetts, for example, while California-grown produce consumed within the state might still rack up some serious miles from farm to plate. DiBona uses the example of food grown in the southwest part of Colorado to highlight the subjective nature of using state borders as a definition.

“If it takes eight hours to drive there, would I personally consider it local?” he asks. “Probably not.”

On a national level, Whole Foods has regional differences in how they define local, according to Heather Larrabee, their regional marketing coordinator. In the Rocky Mountain region, this generally means 400 miles or less, with the emphasis being on the closer, the better.

Currently, there are no official rules from either the United States Department of Agriculture nor the Food and Drug Administration as to which foods might be legally labeled and sold as a “local” product in the United States. But it wasn’t that long ago that the same was true of organic food as well, with multiple operating definitions. But that all changed with the Organic Foods Production Act of 1990. It authorized the USDA to begin a program that regulated the certification of organic food. Its first actions were to define the word “organic” and detail what could be considered standard organic farming practices, making it illegal for anyone not meeting those standards to use the word “organic” on the product. Those growers and processors that were able to demonstrate they met the minimum of these strict regulations were then able to slap on the label “Meets USDA Organic Requirements.” Many hailed this sometimes complicated and costly process as burdensome for farmers, while others see it as a way to build trust with consumers and avoid the “greenwashing” of products that are not actually grown according to environmentally sustainable practices. One thing it certainly accomplished, however, was establishing a nationally recognized definition of the word “organic.”

Is the same possible for “local” food?

Possibly. But it’s yet to happen.

In 2011, President Obama signed into law the Food Safety Modernization Act, which gave new regulatory authority to the FDA and was considered the most sweeping reform of food safety laws in the last 70 years. While the law does make a distinction between domestic and imported foods, it does not directly address what qualifies as locally grown.

While not actually defining the word, the USDA has been researching the rise of the local food movement and conducted a report in 2010 of their findings. Pulling together existing analyses from universities, government agencies and nonprofit organizations, the study looked at data for local food markets across the country from 1978-2007. The report has been used by many retailers considering their own local food policy despite its lack of an empirical definition.

According to the study, most local food production occurs on small farms located in or near metropolitan counties and that direct-to-consumer sales — such as at a farmers’ market or CSAs — made up the largest percentage of local food sales, totaling over $1.2 billion. Findings from this study illustrated the rapid growth in the local food movement, with sales of local food growing twice as fast as total agricultural sales for the same time period. It also points out, however, that local food production still makes up only a small share of the total national food supply, with only 5.5 percent of farms engaged in selling within a local market.

This is changing. Data from the recently released 2012 Agriculture Census says that while the overall sales numbers from locally produced food sold directly to the consumer have not changed significantly, the number of farmers using this method has increased to 7 percent of the total market. While this amounts to about 8,000 more farms showing up at the local market or developing CSA’s within their communities, it does not take into account how many grocery chains are now buying their product at wholesale to sell in stores within their area. To many, this shift away from direct-to-consumer sales to a wholesale model adds a “middleman” between the grower and the consumer of food and violates their personal belief in what constitutes “local” food, but this trend is expected to grow as grocers see the demand for produce and products within the same geographical area.

So, do we really need a universal definition of what “local” food means?

This question has almost as nebulous an answer as the definition itself. Extra regulatory processes are unlikely to be a popular move. On the other hand, so fluid a definition has many customers wary of products touted as local.

But wary or not, “local” is something that catches a customer’s eye. A 2014 survey by the National Grocery Association found more than 87 percent of customers said availability of locally grown products impacted their shopping choices.

But what information they are provided to base this decision on is still up to the individual retailer, meaning that for now, it’s up to the consumer to ask exactly what local means.