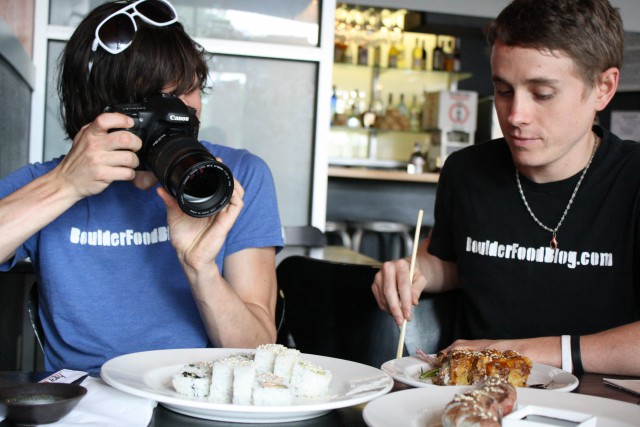 It isn’t tough to spot the food writers at Brasserie Ten Ten on a sunny Sunday. Buddy Thomas’ professional Nikon sits on the table, ready to snap oysters, mussels and whatever brunch is going to be. And Thomas and fellow blogger Paul McCullough both sport homemade T-shirts with BoulderFoodBlog.com boldly inscribed on them.

Undercover critics they’re not. But Thomas and McCullough, who started Boulder Food Blog on Facebook at the end of February, aren’t going for the hardened critic angle. The two Tulsa transplants run their site to pay homage, they say, to a food scene they both love.

Thomas and McCullough joined a food blog scene in Boulder that strongly resembles Boulder itself: Boulder’s unpaid dining scribes are adventurous, eager to travel and fixated on the local.

And, at least in the case of Boulder Food Blog, they love brews.

“We’re beer fans too,” Thomas says. “You can’t come to Boulder and not be a beer fan,” says McCullough. “I wasn’t really a big beer fan until I moved to Boulder. It’s not the same in Oklahoma where we’re from. It’s like — ” “I like to try out all the Denver, all the Colorado beers,” Thomas interrupts. “In Oklahoma, everybody drinks Budweiser. Once I got here I was like, ‘Oh my God. I love it.’” Since McCullough started the Facebook page in late February, he’s seen traffic steadily rising. He invited Thomas to join after the two met and realized they shared a hometown, an interest in digital media and a love of food. Now, they’re neighbors, co-workers and co-bloggers, and McCullough’s iPhone photos have upgraded to Thomas’ professional-quality shots.

The two are plainly excited about the increase in visitors to their page.

“We started out with our friends,” Thomas says, “but when we started getting randoms, that was like, ‘Whoa!’ Then the West End Tavern was the first — and God, we love that place, man. Chicken and waffles — they were the first person to com ment on our photo and be like, ‘We’re glad you guys like it as much as we do.’” “We were like, ‘Woo hoo!’” says McCullough.

McCullough and Thomas say they aren’t interested in hiding their identities or writing scathing reviews. Part of their mission, they say, is to give some attention to people in the restaurant industry whose work they respect.

“We just want to get our site out to everybody, you know, especially the restaurants,” Thomas says. “Because the chefs, these people — it’s art.”

“Food is art,” says McCullough. “That’s exactly what it is,” says Thomas.

They say they don’t care much about making money in any form through the blog. The thanks is enough.

“To have somebody else’s appreciation for something you’ve done is just awesome,” Thomas says. “That’s all we’re really here for. If it starts monetizing, great. We’re gonna start spending that on food.”

That attitude is a common theme for Boulder’s bloggers: They aren’t doing it as a job.

Boyle has run Grace(full) Plate, where she posts reviews of restaurants and store products as well as family recipes and travel experiences, for about two years.

Recently, she says, she wanted an outlet for food-related items that was strictly news.

“I was starting to write a lot about the Colorado culinary scene, if you will,” Boyle says. “And I started learning a lot about what was happening locally, but it didn’t warrant long blog posts.”

She says she picked Facebook as the venue for the news page because it is more accessible than a blog.

“Not everyone is reading blogs, but everyone — my grandpa is on Facebook,” she says. “It’s really approachable and easy. It’s really easy to share there, and it’s short and digestible.”

Boulder Food News is updated multiple times a day with news briefs and links about food in Boulder County. Like McCullough and Thomas, Boyle says she runs the blog because she’s so impressed with the Boulder food scene.

“The biggest thing I love,” she says, “is the focus on local and sustainable and fresh.”

Toni Dash couldn’t agree more. The woman behind Boulder Locavore says the idea for the blog came about after a winter when she went beyond even most Boulderites in her quest to eat locally.

“I decided to see if I could really spend winter with all the produce and meat that I would eat being sourced locally,” she says. “And I discovered lots of different resources, I employed a lot of different food-keeping methods that I wouldn’t have normally.”

From there, word of mouth took over. “I remember having lunch with a friend who was the last of a litany who would say, ‘Oh, can you send me all those resources?’” she says. “And I can remember sending an email with 14 different links and thinking, OK, I’m going to put everything in one place so I can say, ‘Come here and look,’ instead of me sending it out.”

Boulder Locavore is a lot more than 14 links now. Like Grace(full) Plate, Dash’s site mixes recipes, travelogues and restaurant descriptions in a formula that garners dozens of comments on every post.

“It seems to be working,” she says modestly.

Dash notes that her blog appeared at just the right time to match a social movement she sees happening.

“The start of this coincided with a food movement, eating locally and seasonally,” she says. She keeps up with local food developments in photo-filled posts about local farms, chefs and restaurants that use local ingredients, highlighted in a section of her blog.

But Dash isn’t interested in just writing the posts that readers might want to see, which, she says, typically would be recipes. “I really have gone with my gut,” she says. “My intuition has been my guide.”

Dash says she never cared whether Web traffic dipped when she wrote about the things she was interested in. And, recently, the dip isn’t there any more.

“I could probably publish a dessert recipe every day and I’d have a billion hits,” she says. “People love desserts. They love a good cocktail. They love gooey, fatty food. But I don’t wanna write just for that.

“A year ago, when I would divert from recipes and write about a local cultural thing, the traffic would be a lot less. And that has changed,” she says.

Like the other writers, passion and excitement are at the heart of Dash’s work.

“I do my best work when I’m excited,” she says. “Going with what catches my interest allows me to be fun, funny and interesting.”