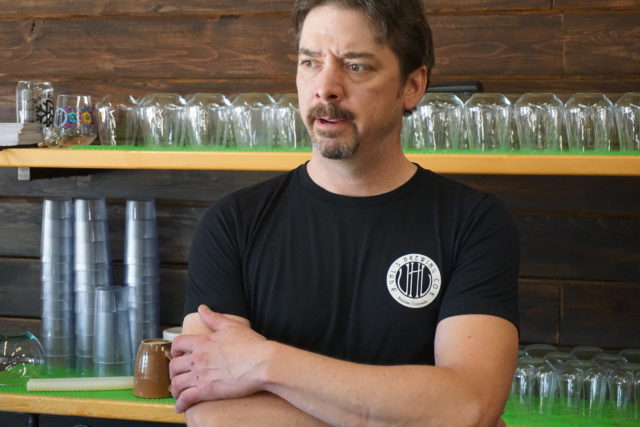 Aaron Uhl believes in excellent products and excellent service. A homebrewer for 10-plus years, Uhl hit the commercial scene in 2018 as a contract brewer — or gypsy brewer, in his words — working with Sanitas Brewing Company to brew and package his hazy IPAs and adjunct-heavy stouts. The model worked, and 2019 saw a good deal of success for Uhl’s Brewing Co. But there is only so much a brewer can accomplish on someone else’s system, so when Wild Woods Brewery closed up shop in January 2020, Uhl found a place to hang up his gypsy hat.

From February to mid-March, Uhl spent 18-hour days brewing beer while reconfiguring the brewery and taproom at 5460 Conestoga Court the way he wanted it. He cleaned the joint up, revamped the tap wall and made sure everything was ready for his noon grand opening on Saturday, March 14.

Like everything else, those immediate days and weeks following the coronavirus shutdown were a whirlwind. Uhl worked with Codi Manufacturing to get the beer on hand into cans. That took a couple of days. Labeling all 5,000, that took a week. Uhl also took advantage of the excess time by switching up brewing schedules to favor a barrel-aging program.

Now life has slowed to a crawl. It’s given Uhl a chance to catch his breath and reflect. Sleepless nights accompany any new business venture, but they’re supposed to get better once the business opens. Uhl hasn’t been awarded that luxury. Instead, he’s had to pivot his business model from in-person draught sales to package and distribution. Adding insult to injury: “We formed too close to the pandemic to apply for PPP [the Small Business Administration’s Paycheck Protection Program].

“So, I’m floating on my own funds, and help from where I can get it,” Uhl says. “Our landlord is deferring the rent, but we don’t know what that means.”

What business will look like over the next several months is anybody’s guess: When people will be allowed in, and at what capacity. Currently, he’s trying to work with his neighbors and landlord to increase outdoor seating.

“We need more space in order to serve more people,” he says. “I’m allotted 25% of my outdoor seating capacity at first, that’s right about 15 people. That’s not a lot.”

Business reflects it. Though he’s got a lot of support from stores like Hazel’s, Whole Foods and Boulder Wine Merchant, sales at the brewery are hit and mostly miss: $56 one day, squat the next.

There are some bright spots: Uhl isn’t living paycheck to paycheck, so he’s better equipped to weather the storm than some. Plus, he’s already built a small following. On May 9, he released a peanut butter imperial stout made with German chocolate rye and Reese’s peanut butter sauce. The beer’s outstanding, and Uhl sold out in a few hours.

They’ll have that opportunity on May 30, when Uhl’s Brewing Co. releases six new beers. Looking further ahead, Uhl plans to release new beers every couple of weeks — on a model heavily reliant on distribution.

Packaging and distribution, by the way, happen to be the hardest and least efficient way of making money in the beer business. For Uhl and the rest of Boulder County brewers, it’s going to be a long summer.

“We’re planning, based on a 12- to 18-month vaccine availability, we’re planning on two years of hell,” Left Hand co-founder Eric Wallace told Jamie Bogner on the Craft Beer & Brewing podcast. “And then I’m looked at a three to five-plus year dig out.”

Five to seven years has become the average lifespan of a small brewery in the best of times. In the worst?

Even with restaurants opening to 50% capacity of indoor seating, the future looks unstable. To that aim, the former Brewers Association Board of Directors Vice Chair added:

“Be realistic,” Wallace continued. “Consider your long-term options. Don’t go further into debt to try to save something that can’t be saved.”