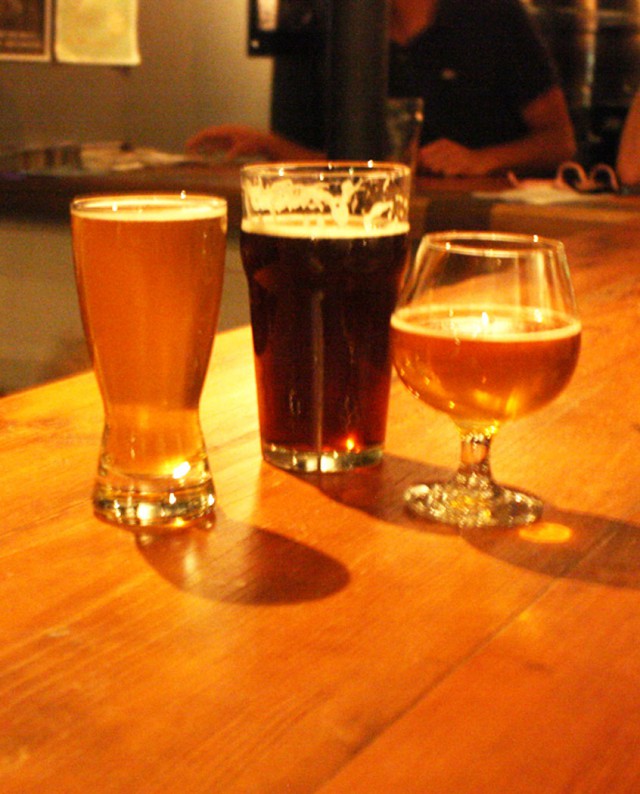 Not in quality. Not in variety. Not in number of breweries — by my count, using the Fermentedly Challenged blog’s compilation of breweries across the state, Boulder County has more breweries (27 with two more coming in the next month) than Denver County (25) or Larimer County (22).

What we’re lacking is style. Attitude. A little bit of that famous photo of Johnny Cash taking a break from strumming his guitar.

The wonderful satirical paper The Onion has a news brief from 11 years ago, “Alcohol-themed bar opens,” in which the owner of the new J.T. O’Drinky’s enthuses about his bar centered on the theme of booze. Now, Boulder breweries are not as neutral and vanilla as that, but there is no doubt that compared to the atmosphere at Denver breweries, Boulder taprooms play it pretty safe.

Maybe Boulder brewers are too humble. So many say they just love brewing, want the beer to speak for itself, want to invite people in to have a pint and have a good time.

That’s awesome, and there’s nothing wrong with it.

But take the atmosphere at TRVE Brewing at 227 Broadway in Denver, in the booming Baker/South Broadway district (which, by the way, isn’t really South Broadway until you cross Ellsworth Avenue, but that’s what they call the neighborhood these days). TRVE is a metal bar. Black walls, black signs that describe TRVE beers using the Official Metal Font, black-painted kegs. Animal skulls on the walls. The soundtrack is all metal, all the time. Adhered to the mirror in the men’s bathroom: “Employees must carve Slayer into forearms before returning to work.”

I didn’t have the requisite number of tattoos to enter TRVE, but I lingered outside and quizzed people about the beer as they left the bar. I’m kidding, actually, which is the magic of places like TRVE: It’s an all-out metal bar, but everyone is welcome. You don’t need to know Judas Priest from Pantera to take a seat at the massive community tables and grab a couple TRVE brews.

As for the beer, TRVE doesn’t disappoint. I’m not sure what the metalest of beers is, but TRVE has its bases well-covered with an American stout called Stout o))), in reference to berobed metal band Sunn o))), and a style it calls “Denver666 Common,” most likely taking its name from the album by Denver metal band Speedwolf. That beer in particular, named Death Ripper, is a unique brew, with a very hoppy aroma but not nearly as much hops in the flavor. Instead, the primary taste is earthy and deep, even though Death Ripper is only 4.2 percent ABV.

Another remarkable beer on tap for our visit was Prehistoric Dog, a salted wheat. Do you salt your Corona? Trick question, don’t drink Corona. But at least with TRVE’s slightly comparable beer, you can decide if you ever would salt your Corona, were it the only beer left on Earth. Yes, TRVE’s wheat is miles beyond Corona, and the salt is noticeable but certainly not dominant. As the 10-ounce pour went down, I think the salt helped make the beer smooth and drinkable.

The stout, meanwhile, is coffee-scented and full-bodied, while the Atma (an album by Oregon metal band YOB) Belgian golden strong is sweet and yeasty, with caramel and a little cherry.

Now I know Louisville or North Boulder isn’t South Broadway, so it doesn’t have to be metal. But hopefully a few in Boulder County will jump on board with the idea that tapping your beer can be done in style.