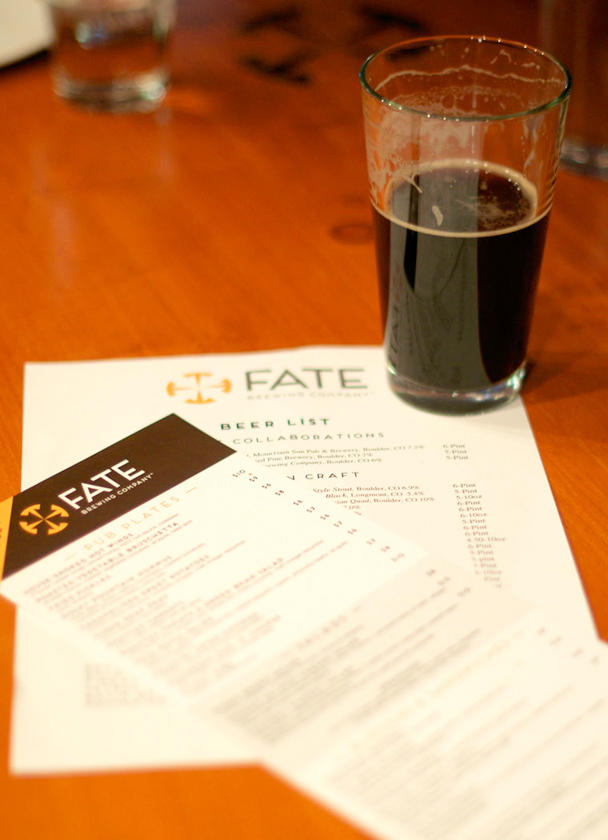 In Northeast Ohio, where I’m from, Great Lakes Brewing Company is pretty much the beginning and the end of the craft beer conversation. Maybe nobody else makes good craft beer — I wouldn’t know, I moved when I was 18 — or maybe everyone’s too hooked on Bud Light to embrace good beer, but the effect is the same: Great Lakes exists in a bubble — so much so that its taphouse doesn’t have anyone else on tap.

In Boulder County, that would be pride bordering on blindness. Having other breweries on tap is only sensible. There’s tons of good beer around, first of all, and most brewers seem to want to serve good beer no matter who makes it.

And then there’s the whole community thing that’s such a big deal here. Craft breweries are popping up left and right, but the consensus — maybe even unanimous view — is that they aren’t battling for customers. They’re way more likely to collaborate than compete.

Community is definitely the theme at FATE Brewing Company, one of Boulder’s newest. Headed by a veteran of Boulder’s Big Red F restaurant group, Mike Lawinski, and a former brewer at Golden City Brewery, Jeff Griffith, FATE is starting off with strong ties the brewing and restaurant communities.

The way the brewpub is opening is only strengthening those connections. Although, more accurately, FATE isn’t a brewpub yet. Its brewing room in a corner of the restaurant is draped in plastic sheets, as Griffith and Lawinski decided to open the restaurant before FATE could start brewing its own beer.

Its first batches are expected to be ready in March, but for now, FATE’s rolling through collaborations it did with other breweries in Boulder and beyond. Its Cocoa Punk’n Porter, made with Asher Brewing, was a favorite for our group, with strong chocolate notes and great depth. The other collaboration on tap, Cherry FATE stout with Mountain Sun, didn’t have much punch but showed notes of Mountain Sun’s cherry chocolate stout — as in, more sour cherry than sweet. Sadly, at the time we were there, the Twist of FATE Rye Brown (with, naturally, Twisted Pine) was all tapped out. FATE has collaborations coming out soon with Broomfield’s Big Choice, Upslope, BRU and Lone Tree.

And then there’s the guest tap list. That’s usually off-limits by the beer tour’s rules, but we made the rules, so we can break them, and FATE’s eclectic and varied list is one of the best we’ve seen, drawing heavily from Colorado, California and the Pacific Northwest, as well as six straight from Belgium.

We have high hopes for FATE. If they like beers this good, they’re likely to try to make beers that are even better. When their brewing operation gets started, we just might double back.