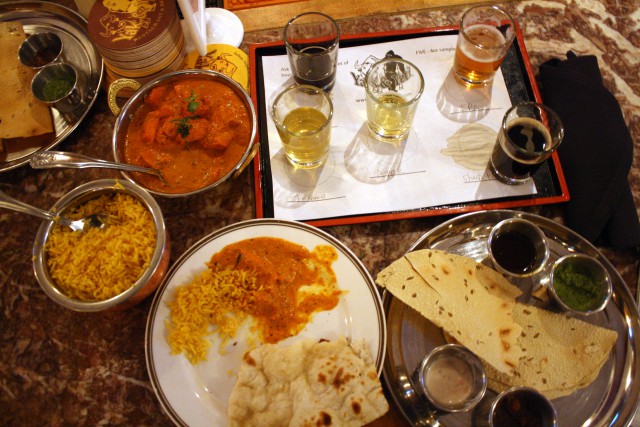 I miss my newspaper friends.

I’ve been going solo recently for the beer tour, because we’ve wrapped up Boulder County and nobody else on this staff has the journalistic integrity to drive 20 minutes to drink beer. And that’s been fine. When I was at Our Mutual Friend in Denver, they had six beers on tap and I could try them all. I’d had a couple Crystal Springs creations before, so my solo trip was all about trying ones I hadn’t had.

This week at Yak and Yeti, I wish the gang was all here. Yak and Yeti has 11 beers and a house-made ginger soda on tap, and I’ve never had any of them. Sure, Max the bartender says he can pour five samples for $8 — a pretty awesome deal, really — but that still only covers half the menu.

Not to mention the most interesting part of the menu: the food. Yak and Yeti is Indian plus craft beer. I like it from the first glorious scent of curry a block away.

The location I visited, in a huge house near Olde Town Arvada, is Yak and Yeti’s second location, but it’s where the brewing magic happens. It’s classic Indian and south Indian fare, which means I want Jeff, Joel, Elizabeth and David with me so I can steal off their plates as much as possible.

Instead, as the only dedicated journalist, I have to make the tough calls. So it’s chicken tikka masala and the five most interesting beers on the list, including the Chai Milk Stout, which recently won silver in the Herb and Spice category at the Great American Beer Festival among 134 entries. Based on the brewery’s milk stout, the chai is super-smooth, delicious and complex. As it should be: Max says head brewer Adam Draeger uses the same chai spice mix that the restaurant uses in its “proper Indian chai.” That means, of course, the spice blend recipe is a secret, kept in an “unlabeled container surrounded by other unlabeled containers,” Max says. Chai recipes are no joke.

The other Yak and Yeti top seller, Max says, is the Himalayan IPA, because we’re in Colorado, after all. This one’s got a very hoppy nose but good balance in the flavor, just a little sweet mixed with bitterness. I didn’t contact any state authorities to verify this, but Max says a request to approve a label for Himalayan IPA — a required step in canning and bottling — was rejected by a state authority because “people would think it was water.” So I’d like to point out that Himalayan IPA is beer, which contains water but is not water.

Speaking of water, have some nearby for Jalapeño Lena. Max soft-pedaled the heat in the jalapeño ale; I like a little spice but the back-of-the-throat heat was more than a little. Rounding out my samples were the gluten-free apple ale — very nearly a cider, slightly dry, slightly buttery and not very sweet — and the Sherpa Prima, a brown ale aged in whiskey barrels that impart a very definite whiskey flavor and feel.

As I depart — keeping my head down so I don’t get another glimpse of the rice and honey brown ale, the Belgian golden strong ale, the Oktoberfest — I overhear a well-meaning dude at the bar placing his order.

“I’ll have the MAH-tur PAIN-ur,” he says. Yes, for both craft beer and ethnic food, we’ve got a long way to go. But I strongly recommend the — how do you say it? — KAI Stout?