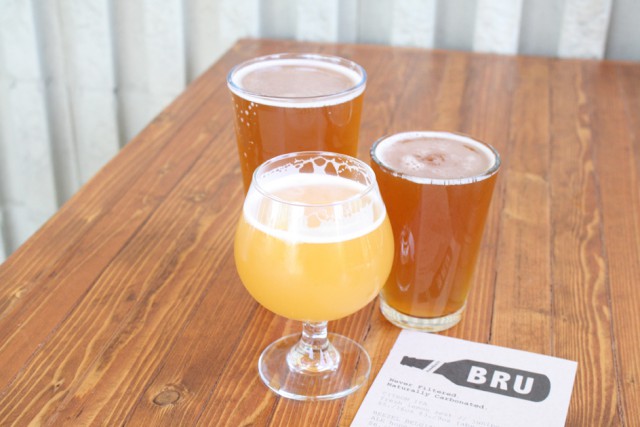 The beer with lunch. In my non-scientific survey of the Boulder workforce, roughly 100 percent of Boulder’s workers have experienced it. But many are unaware of the dangers of the beer with lunch. Sure, you think everything’s under control — you’ll just head to an old favorite like Mountain Sun or Avery, or check out a new brewpub like West Flanders or this week’s visit, BRU Handbuilt Ales and Eats. You’ll try a beer with your food and be on your way, no problem.

But next thing you know, it’s 3 p.m., you’re back at the office and your brain is moving so slowly it might win an award from the Danish Film Institute.

Yes, just one beer in the middle of the day can shut you down for the afternoon like a 5-Hour Energy commercial. It’s happened to us here more than once, and it’s had some very sad consequences: When we get a beer with lunch, I catch myself reading the ABVs on the menu more closely than I do the beers’ styles. That’s just wrong.

Enter the 9-ounce pour. Our noon lunch at BRU prominently features the baby beers, just over half the size of a typical 16-ounce pint glass. (I have a sneaking suspicion some breweries around Boulder use pint glasses smaller than 16 ounces, and one day I’ll bring a measuring cup and a funnel with me into taprooms, but that’s all for another time.)

BRU offers most of its beers in both 16- and 9-ounce pours, aside from some Belgians in 10-ounce tulip glasses. The 9-ounce might look a little silly, but if it does what it suggests it’ll do — let you get a beer with lunch and let you accomplish something afterward — it’ll be well worth it.

So naturally I didn’t get one. What, you think I’m sacrificing 7 ounces of beer in order to do more work? No, I got a full 16 of BRU’s light, delicious, yeasty saison, a collaboration with two of BRU’s chefs, Jason Brown and Josh Monopoli. The beer, brewed with tangerines, continues BRU owner Ian Clark’s pattern of incorporating added ingredients into beer, like honey, black pepper, dates and sour cherries.

But Elizabeth tried the 9 with her Citrum IPA, brewed with juniper and lemon zest. Despite her initial reaction — “Umm, can I get a sippy top for this?” — afterward she says she “did snap out of it faster,” which is good because she dashed off to an interview after lunch.

Me and Jeff, not so much. When he was done with his 10-ounce pour of Beezel, BRU’s sweet, relatively highly carbonated golden strong ale — probably my favorite of theirs — Jeff and I made the decidedly not-industrious decision to go for two. Jeff ’s patersbier — yes, that’s father’s beer, a lighter Belgian style — is a smooth, easydrinking summer beer; my Arium Dubbel is an excellent cherry-yeast blend.

Offering the 9-ounce pour is a very nice gesture on BRU’s part. I’m sure it will be appreciated by many patrons with greater self-control than I. But when the server comes around and asks to take the menus, especially with a beer lineup like BRU’s, I’m keeping a beer list. Work be damned.