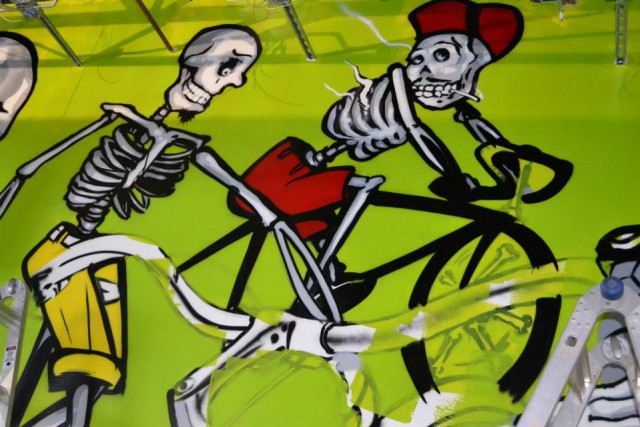 Oskar Blues’ latest venture is, at first glance, a rather odd mash-up: Bikes, tacos and tequila. Oh, and beer, of course.

And yet somehow, in OB’s typical Midas touch fashion, it all works.

We hit the new Cyclhops Bike CANtina this week for dinner and drinks, curious about how the hell you combine a bicycle sales/repair shop with a microbrewery-run Mexican joint.

Cyclhops, which has been open less than a month, is located in a shopping center at Nelson and Airport roads in Longmont, in a spot that has seen its fair share of restaurant tenants cycle through over the years (remember Hunter’s?). This one should stick around for awhile, given OB’s track record of bringing stability to the old Silo sports bar location with its Homemade Liquids and Solids, which is always packed (don’t these people have jobs?).

The latest hot concept from the folks who brought you the CHUBurger is, well, hot. As in spicier than you’d expect. The salsas are going to sell some beers, let’s put it that way.

I started by ordering my old OB standby, a Deviant Dale’s ale, to provide some sense of security and comfort in this new environment, where a massive green wall sporting trippy bike-riding skeletons stretches along most of the length of the restaurant. (Check out a video of it being painted at http://eat. oskarblues.com/cyclhops.)

The tacos were yummy, especially the fish variety, and both the enchiladas and the posole rojo packed more punch than we thought they would. Other highlights were warm tortilla chips that seemed as handcrafted as the beers, the Cyclnachos and the queso, which is one of several distinctive sides you can choose beyond old standbys like rice and beans. We’re talking pickled jalapenos with onions and chicharrones (deep-fried chicken rinds).

Cyclhops keeps as many as 20 beers on tap, about half of which are its own — and then there are the 43 premium tequilas in a dedicated tasting room, a road we didn’t have the courage to venture down … yet.

Also passed on trying the spicier versions of the salsa, like the arbol chile and orange habanero. Gotta save something for next time. Like the bacon-wrapped Sonoran hot dog.

After finishing my liquid deviance, however, we did wander into the cycling portion of the show, where you can check out OB’s own bike line, REEB Cycles (yes, that’s yet another clever name from Oskar Blues, featuring its main product spelled backwards).

According to the Cyclhops Facebook page, the “all-American bike company was born as a middle finger to bikes made overseas and to bike thieves, after owner Dale Katechis’ bike was stolen in 2011.”

Our favorite model features a flask-holding contraption under the seat and a bell that can be unscrewed for use as a shot glass.

We knew this was a cool company years ago, when we’d drive by the brewery in the morning and see the employees doing calisthenics in the parking lot. But really, how many times can they outdo themselves? We can’t wait for what comes next.

Maybe somebody will steal Dale’s car.