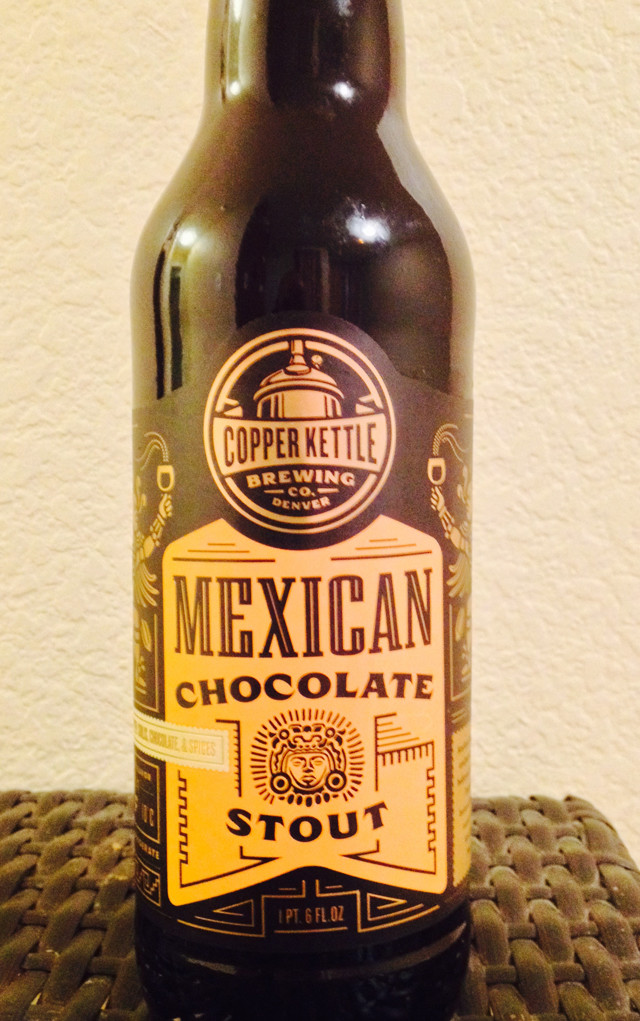 Let’s all agree that this past snowstorm was the last throe of winter. In exchange for politely ushering winter out the door, we’ll drink one more stout and then be done with it all for, oh, six months.

A stout worthy enough to end on is the Mexican Chocolate Stout from Copper Kettle Brewing Company in Denver. It’s, among other honors, the 2011 Great American Beer Festival gold medal winner in the herb and spice category. Almost five years after winning that award — and five years after Copper Kettle opened its doors — the Mexican Chocolate Stout is still remarkable.

Copper Kettle brewed this stout using cacao nibs, cassia cinnamon and a blend of three chili peppers — all things that go really well in dark beers, and all things that make it to the palate.

When I first opened the bottle, I was hit by the overwhelming scent of fruity chili peppers. They were so tart — some think the beer tastes like a sour — that the scent was almost like that of strawberries. The aroma opened up some when I poured the bottle into a glass, and having not read the label as to what was in it, I could tell there was something familiar, just not what.

Of course, that ended up being the cinnamon. Copper Kettle chose the cassia variety, which you’ll find in many homes and baking aisles, likely because of its distinctive scent, even if you can’t immediately  place your finger on what it is. The cassia variety’s scientific name, cinnamomum aromaticum, would seem to indicate it is more fragrant than other varieties, but probably not because scientists create misnomers all the time just to mess with us. Whatever, this isn’t about them.

The beer poured pitch black, with a brownish head that dissipated quickly. Tasting it, there was an immediate bite in which the cinnamon starred. After swallowing, out came a robust dark chocolate flavor, which arrived just in time to integrate with the cinnamon. And after that, the essence of the chili peppers came back through the nose and rounded out the experience completely. Copper Kettle says on the label that they tried to imitate the old Mexican spicy hot chocolate drink in this brew, and on flavor, they nailed it.

At 7 percent ABV and 50 IBUs, it’s still remarkably drinkable — like, hot chocolate drinkable. Yet it still manages to engage and entertain the taste buds. The flavor of smoke only came out about halfway through the drink for me, and when I started to recognize how it worked with the cinnamon, the stout just somehow got better. That smoke likely came from roasted malt in the brew.

The beer doesn’t rely on the novelty of any of the flavors, the chilies especially, and balances each perfectly. And you’d think there’d be some discomfort on the tongue while drinking a beer with cinnamon and chilies, but despite maybe the first sip, the stout’s heat and spice intensity are refined.

The Mexican Chocolate Stout is only available in Colorado, and you can find it in liquor stores statewide or in Copper Kettle’s Denver tap room.