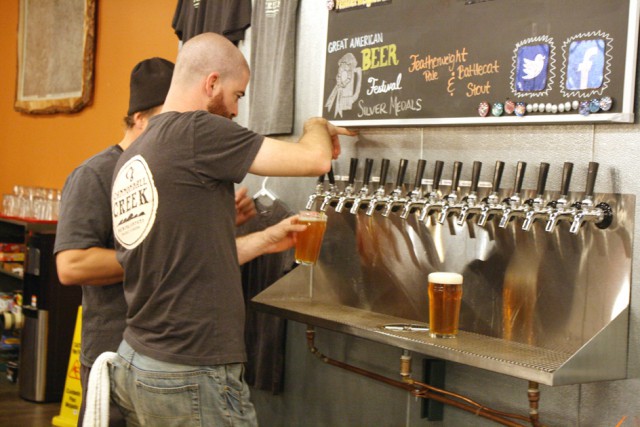 Brewery taprooms are one of the very few places — dentists’ offices being the other I can think of — where people often ask for things they won’t like.

At breweries you can often see — as I did at Cannonball Creek Brewing on Highway 93 in Golden — customers ask for a taste of a beer they don’t expect to actually enjoy. Especially when the tastes are free, as they so often are.

That was evidently the mindset of a fellow drinker at Cannonball who asked for the Chocolate Pumpkin Porter, one of seven beers on tap and definitely the most unusual and creative.

She kept a poker face through ordering and sipping, then she exclaimed, with genuine surprise, “That’s not bad!”

“That’s not nearly as bad as I thought it’d be,” she said. High praise indeed; I’m sure the brewer behind the bar was thrilled with such a rave review.

But seriously, it’s a very cool thing that she tried it at all. Given the constant experimentation of brewers and the huge variety of beers out there, it’s important for customers to be willing to try a little of everything.

I, meanwhile, had a taste of the chocolate pumpkin porter because I thought it sounded amazing, and I was not wrong. The beer is on the mellow, balanced end of the spectrum, with prominent pumpkin and very little chocolate flavor. Yet again, it’s a pumpkin ale I wish was available year-round. Not bad? It’s kind of awesome.

I picked out Cannonball Creek not just because it’s close to Boulder County — take 93 across Rocky Flats and watch for it on your left — but because it had a very strong showing at the Great American Beer Festival, raking in two silvers in two very popular categories, American stout (Cannonball Creek’s Battlecat) and American pale ale (the Featherweight). It’s an impressive haul for a brewery that only opened in January. Sadly, the Battlecat wasn’t around, but the Featherweight — which took silver among 124 entries at GABF — is on tap. It’s an excellent pale, hoppy, light, balanced, with a slightly hoppy aftertaste. There’s little wonder it took silver at the festival, as it’s a great example of the style.

On a busy Thursday night, I’m encouraged to see a large number of women in Cannonball Creek’s window-filled taproom. The crowd’s probably about 60 percent men, a much more even ratio than we observed months ago in a January column.

I just wish I’d come by Cannonball Creek in the summer; its entire west wall and most of the north and south walls are covered in windows, which in November afford me only a view of nothing at all.

Also on tap at Cannonball Creek were a hoppy West Coast red, a regular porter, an IPA, an ESB and a Belgian golden ale. Given the brewery’s recently earned pedigree at GABF, they’re all worth trying. Even if it’s in that dentist’s office kind of way.