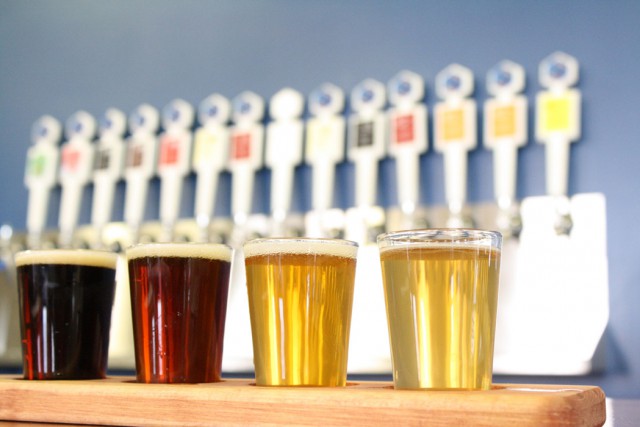 Boulderites love to travel, but I think it’s fair to say the North Denver suburbs aren’t typically a prime destination. Northglenn and Thornton probably have a few undeserved negative associations around Boulder, whether for being too suburban or too flat or too monotonous or just not being Boulder.

But I must insist Northglenn’s only independent brewery — there’s a CB Potts, you see — is worth the trip. Beer by Design Brewery, which occupies an industrial park space much like Wild Woods, Upslope or any number of Boulder County breweries, is producing beer as good as anyone in Boulder.

Even in its infancy — it’s been around for 10 weeks — BBD has 13 beers on tap, most of them in three groups: the Women & Beer Series, the Mountain Series and the Architectural Series. One very good reason to take the trip to BBD: Tasters are 3 ounces, not the typical 4, which is good news. You can try more beers without making a bad decision afterward — or your designated driver can have a sip or two while you try everything twice.

Spoiler alert for hops lovers: BBD might not top your list. Nothing on tap is as hop-forward as craft beer favorites like Avery IPA or Hoppy Boy. Even the Red Devil IPA, one of BBD’s hoppiest beers, is balanced with caramel flavors.

BBD’s taproom is clearly a neighborhood bar. The bartender greets everyone as they enter, recognizing most of them, and brewmaster Vance Sabbe also works behind the bar, chatting with customers. He readily explains the philosophy — both in brewing and business — for Beer by Design, saying he prefers to stay away from hop-heavy beers as a matter of his personal taste. Sabbe says BBD currently distributes kegs to several eateries around North Denver, including multiple Old Chicago restaurants and Stapleton Tap House.

But the best way to get to know BBD is to get tasters of a series, and having already gotten small samples of two in the Women & Beer series, I was hooked. Designed by Sabbe as a tribute to women in the craft brewing industry, Women & Beer includes four beers: a blonde, red, brown and double black IPA. None packs an overbearing hops flavor, even the smooth, balanced Jacque’s Double Black IPA. The Platinum Blonde is tangy, light and fruity, perfect for summer; the Brunette Brown is smooth and light — a stark contrast to some other brown ales on the heavier, more complex side. Similarly, the Lucille Red demonstrates just how much range there is in red ales — nothing like the hop bite of an Imperial Red or India Red Ale, Lucille is very clean and malty.

I realize I’m not going to sell many people on a trip to Northglenn. If nothing else, readers might say, “Oh, yeah, I heard something about them,” if the name comes up a month or six months from now. But it would definitely be worthwhile to track down a BBD tap handle of almost any variety. And pointing your Subaru in the direction of North Denver would be a rewarding evening, too.