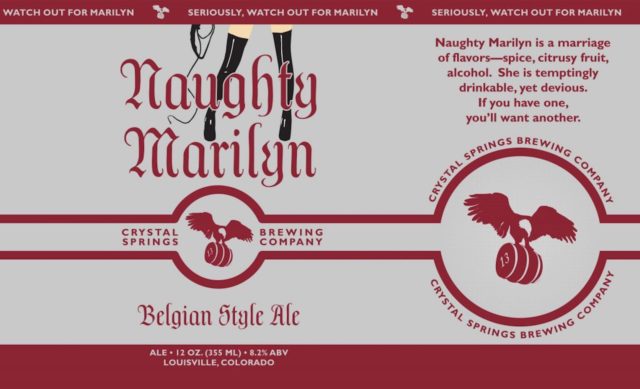 A decade ago, Tom and Kristy Horst started Crystal Springs Brewing Company in their Sunshine Canyon garage on a 20-gallon system. Today they operate two taprooms in Louisville, distribute around the Centennial State and, as of 2019, brew 1,400 barrels of beer a year.

Crystal Springs’ story starts with Tom’s retirement — he taught instrumental music for 28 years at Boulder High School — and with the Horsts suddenly finding themselves empty nesters. What’s a retiree to do? Why not start a brewery?

Tom started homebrewing in the early ’90s — his first was a batch of Rocky Raccoon’s Crystal Honey Lager from Charlie Papazian’s book, The Complete Joy of Homebrewing. Twenty years later, he didn’t have to go much further to start his brewery: Boulder County has a home occupancy law, which meant they could commercially brew out of their garage.

So, Tom fired up the burner and started whipping up batches 20-gallons at a time. They counted North Boulder Liquor, Boulder Wine Merchant and Liquor Mart as some of their first customers. Then came Pizzeria Locale, for which they developed Summertime Kölsch. The beer took off like a rocket, and the Horsts expanded operations to a two-barrel system.

In 2013, the Horsts acquired their Louisville production brewery/taproom on South Taylor Street.

The following spring, they went from a two-barrel to a 15-barrel system. The first beer brewed on the new system: Marilyn, a Belgian-style Golden Ale. Tom named the beer after his mom, and the label featured a silhouette graphic based on a photo Tom’s sister found of their mother in a two-piece bathing suit taken in 1942.

Nothing’s easy when you’re putting together a new brewery. While Tom was brewing up that initial batch of Marilyn, the electricians working on the building killed the power and cut the juice to the glycol chiller on the fermenters. When Tom returned the following morning, Marilyn’s temperature was about 80-90 degrees Fahrenheit, when it should have been at 72. Tom suspected the brew was ruined, but rather than dump it; he decided to let the beer finish fermenting. What came out was nothing short of glorious: A cloudy tangerine color with loads of citrus, fruit and spice. And it was big, too: 8.2% ABV, but not boozy. Balanced and sneaky: She’ll come on strong if you’re not paying attention.

It was good, but it wasn’t Marilyn. Tom needed another name, and there’s a cheeky tradition when it comes to Belgian golden strong ales (see sidebar), so Tom dubbed the new brew Naughty Marilyn. A new label followed suit, and Marilyn donned knee-high boots. Good, but they needed to drive the naughtiness home. That’s when Kristy suggested the whip.

“Mom wasn’t really excited about that,” Tom said in 2019. “She’s probably the nicest lady you’ve ever met in your life.”

Marilyn Horst passed away on Jan. 18, 2019. She was 94. But her naughty side lives on at Crystal Springs, the company’s second-best seller, right behind Blood Orange Kölsch.

Crystal Springs is one of the 150-plus breweries participating in the Great American Beer Festival passport program. Head to either of its Louisville taprooms and get BOGO on all GABF special release beers. As for Naughty Marilyn, you’ll find it wherever good beer is sold.

The devil’s in the details

Pale lagers took a while to pierce Belgium’s borders. And when they did in the 1960s, Belgian brewers responded with pale ales. The Flemish aren’t much for being on-trend.

But innovation moves all, and in the 1970s, the Breendonk-based Brouwerij Moortgat took its flagship ale, Victory Ale (brewed to celebrate the end of World War I), from amber to blond, renamed it Duvel (DEW-vul, Flemish for “devil”) and never looked back.

Duvel pours a sparkling golden straw color and kicks up a massive pile of snow-white foam. It fizzes like Champagne the whole way down. Brewed with pilsner malt, Saaz and Styrian Golding hops, and candi sugar, Duvel is light and dry with fruity esters and peppery yeast. It clocks in at 8.5% ABV, but drinks like a session ale. Hence the name: The devil will get you if you’re not careful.

Thanks to Duvel’s popularity — you can easily find it at liquor stores, even on tap at the right places — other brewers have followed suit by giving their Belgian strong ales devilish names: Naughty Marilyn, Delirium Tremens and Lucifer, to name a few. And like the country they hail from, there’s nothing trendy about them — just iconic perfection.

What can’t kombucha do?

Pitching the future of food