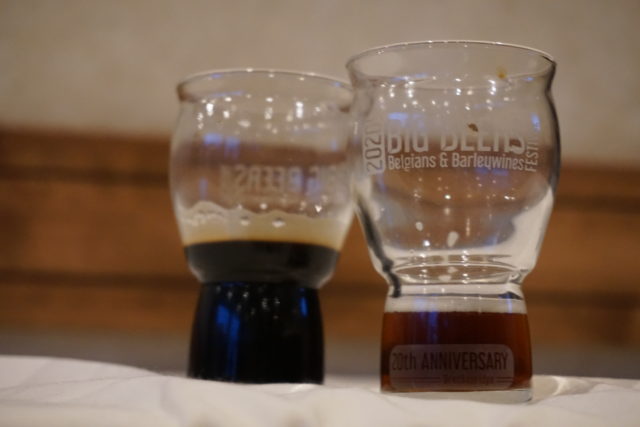 Started by Bill and Laura Lodge 20 years ago in Vail, Colorado, Big Beers, Belgians and Barleywines has become one of the year’s premier beer festivals. What started as a trade show to showcase legacy imports and burgeoning American experimentation — the first Big Beers festival had only one seminar, hosted by Adam Avery and featuring a vertical tasting of Hog Heaven — has since moved from Vail to the Beaver Run Resort in Breckenridge, expanded from one day to three, and now includes educational seminars, Cicerone examinations, brewmaster dinners, a homebrew competition and the festival’s signature commercial tasting — four hours with some of the best beers on the planet.

Hands down the best beer poured at this year’s tasting was Samuel Adams’ 1994 Triple Bock from The Boston Beer Company. Aging beer isn’t exactly commonplace, and most drinkers don’t expect their beers to improve over time. Had you opened a bottle of Triple Bock 10 or so years ago, the pungent aromas of soy sauce combined with a viscosity hewing toward motor oil would have convinced you to dump the rest down the sink. But at 26 years old, Sam’s tar-black Triple Bock produced subtle nuances of almond, butter toffee and fig, the velvety texture of an aged port, and the welcoming madeira-like notes of oxidation. In a word: Phenomenal.

Those handful of bottles served at Big Beers were reportedly the last in existence (unless a collector somewhere still has a few left in storage), fitting for a festival celebrating its 20th anniversary with the appropriate amount of reunion and reflection.

But the past was not a point belabored: Big Beers is a forward-thinking festival with the future squarely in mind. And those vintage beers on the tasting room floor were potent reminders: Experimentation has long-reaching effects.

No one panelist at Big Beers resembled this idea more than Peter Bouckaert of Purpose Brewing and Cellars in Fort Collins. The Belgian-born and -educated brewer worked for Rodenbach before coming to Colorado in the mid-’90s as New Belgium’s brewmaster. After two decades with the company, the iconoclastic Bouckaert left New Belgium to start Purpose in 2017.

“There are three ingredients in beer,” Bouckaert told the audience, “Knowledge, creativity and experience. Beyond that, there’s nothing else.”

Bouckaert balked at the notion that beer must include the four — and only the four — common ingredients (water, malt, hops, yeast), pointing out that you would never hold a chef hostage with only a handful of ingredients to work with.

Big Beers commercial tasting further emphasized Bouckaert and Stuffings’ sentiments. Typical beer attributes like bitterness took a backseat to sour and sweet, and a stunning spectrum of complexity was commonplace. The look and flavor of beer isn’t just evolving, it’s exploding. Trying to predict where the market will go from here is a lot like that Triple Bock from ’94: You may not like it now, but give it time. Give it time.