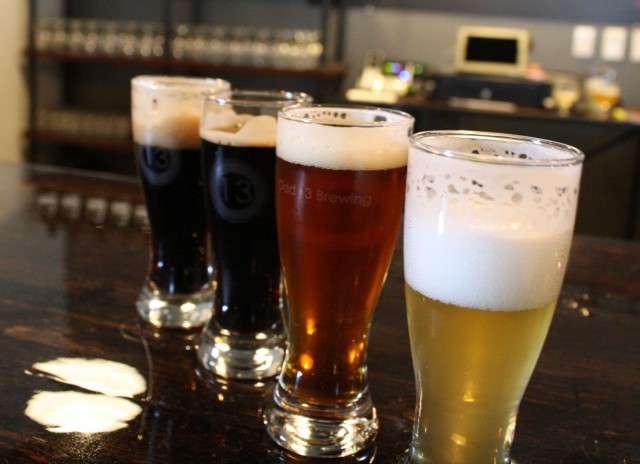 There’s nothing I like more than an odd couple.

And there are plenty of unexpected pairings at Odd13 Brewing Company, the next brewery to join Boulder County’s ever-growing list when it holds its grand opening Aug. 3.

The contradictions begin right when you pull up. Odd13 has goals as lofty as any new brewery in Boulder — barrel-aging beers, six or more taps running, covering all styles from stout to Belgian to rye IPA, live music, arcade games — yet this is the most neighborly of neighborhood breweries. Directly across the street from the historic Mary Miller Theater, Odd13 occupies an unassuming little building that formerly housed a plumbing company. Co-owners Ryan and Kristin Scott gutted the interior, Kristin Scott says, and have spent months renovating the building.

So while the brewery has lofty goals — and, as a veteran homebrewer, Ryan Scott is capable of getting there — it’s also filling the role of neighborhood bar. Kristin Scott describes conversations with neighbors about controlling the volume of music and making sure everyone has parking available — the kinds of things that don’t really come up when you open on Pearl Street or in a warehouse.

Then there’s the motif. In its marketing and promotions, Odd13 has established itself as Boulder County’s first theme brewery. A banner in Odd13’s window encourages passersby to “Meet the Odd Squad” when the brewery opens Aug. 3. The Odd Squad isn’t just Odd13’s four year-round beers; it’s a group of four superheroes that “attack blandness with hop character and lack of color/flavor with malt complexity,” Odd13’s website says. Then there are the five villains, the Legion of Odd, that will regularly rotate on Odd13’s taps, and two Sidekicks, rarities that Odd13 says “are often sour, very hoppy, or otherwise difficult to craft.”

So this neighborhood bar is the battleground of superheroes and villains. And, in another contradiction, the battle is curated by co-owners as friendly and down-to-earth as any brewers around. Kristin Scott gives me a tour before other preview invitees arrive, but even once they do, Kristin and Ryan frequently step out from behind the bar to show people around the fermentation tanks and outdoor patio.

By the time Odd13 opens, three of the four Odd Squad members should be on tap. At the July 27 preview, I got to try two, the Coal Miner’s Cuzzin oatmeal stout and the Eric the Red India Red Ale. The stout, weighing in at only 4.4 percent ABV, is smooth, creamy and simple, and as much as I love a good Russian imperial, it’s nice to see a stout I could order a second of. Eric the Red, meanwhile, is not playing around; it’s hoppy and sharp, with some citrus flavors.

Also on tap for the preview was the Succubus Belgian golden strong ale, a Legion of Odd member that, like most Belgian strong ales, is extremely sneaky. It’s so good, refreshing, light, bubbly, delicious — and 8.2 ABV, before you start liking it too much. Odd13 also had a variation on the stout, Buzzin Cuzzin, made with coffee grounds but still mild and subtle.

And speaking of buzz, people’s eagerness for Odd13 helps prove Lafayette is more than ready for more beer. Odd13 fans lined up to ask for invites when Odd13 posted on Facebook about the preview event. And with the grand opening just days away? That’s a lot of hype. Sounds like a job for the Odd Squad.