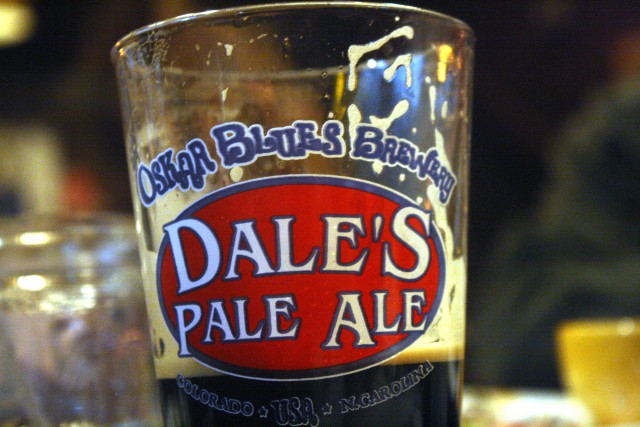 I offered my apologies to Oskar Blues back in March, when I made my first trip to the Tasty Weasel and Grill & Brew and learned there’s a lot more to Boulder County’s brewing bad boys than hop-forward beers like Dale’s and Deviant Dale’s.

But this time around, when the Boulder Weekly gang heads to Liquids & Solids, I’m surprised again: Not only does Oskar Blues do malt, about half the OB beers on tap are dark and delicious.

That includes yet another silky, thick and amazing barrel-aged Russian imperial stout, Ten Fidy aged in Maker’s Mark bourbon barrels. I say yet another because I raved a few weeks ago about Crystal Springs’ Black Saddle, but I’m banging the drum again because it’s just a great beer. I really can’t imagine objections to a beer like the barrelaged Ten Fidy. To paraphrase Seinfeld’s mother, Who wouldn’t love it? Despite the barrel aging, it only tastes slightly of liquor, sticking instead to the sweet notes.

Like any responsible brewery, Oskar Blues serves the badass beer in 10-ounce glasses for drinkers’ safety: It’s still only 10.5 percent ABV like the original (c’mon, you knew where the name “Ten Fidy” came from, right?) but that’s still pretty high and it’s a good enough beer to be dangerous.

So maybe take a break from the liquor-y goodness and try OB’s other awesome taproom-only beers, like the Old Chub on nitro and its, well, liquory goodness. Actually, Old Chub is one of the less Scotch-like Scottish ales out there, in my opinion, trading the trademark peat flavors for sweetness, especially on a nitrogen tap. Grand Lake Brewing Company, which recently shuttered its Grand Lake taproom and plans to open in Denver, sets the peat-and-smoke standard with its Plaid Bastard — a must-have for dark beer lovers who haven’t tried it — and Old Chub holds down the other end of the Scottish ale spectrum, one of my favorite spectra in the world.

If you’re looking for smoke, Oskar Blues can do that too: a strange little concoction called Smidy Fingers Blackstrap Lager, billed to me by the server as “kind of like half a Ten Fidy.” I don’t know enough about brewing to know how a lager can be half of a stout, but in a way he was right: Blackstrap Lager is like a Russian imperial stout that’s had the brakes applied. There’s a slight taste of Ten Fidy, a mild sweetness and a pleasant smoky flavor. It’s not the first time OB has used blackstrap molasses in a beer, as it produced Blackstrap Fever Dark Lager back in 2011.

But then Jeff ’s order, hardly consulting the menu before heading straight for the Deviant Dale’s, throws big hoppy wrench in the whole thing. Jeff ’s an Annapurna Amber guy; he’s a saison and bière de garde guy; he’s a Sawtooth guy. Yet this is the second time he’s headed straight for Deviant Dale’s, the double IPA that claims it’s a single. I’m getting to the bottom of this.

Bad answer, good beer. Deviant Dale’s is a complex, bitter, caramel-malty monster, and I don’t blame Jeff for liking it. As much as Dale’s Pale Ale, Deviant Dale’s defines Oskar Blues, assertive and complex. I’m just glad they can pull off those qualities in all kinds of styles.