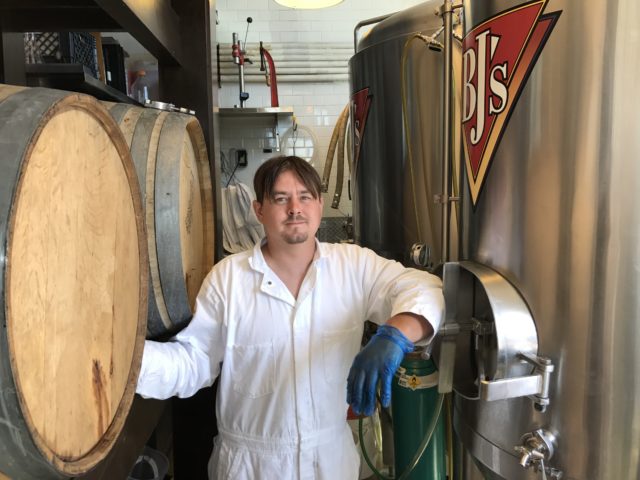 If you don’t think a publicly traded brewpub based out of California can be a hotbed of Boulder brewing research, then you haven’t been to BJ’s Restaurant & Brewhouse.

Located in the Twenty-Ninth Street shopping center, BJ’s is the playground of Aaron Stueck: brewer, historian and head of BJ’s research and development division.

“It’s my job to come up with new brewing practices,” Stueck says while working on a new creation: Vienna IPA.

“Vienna is typically used as a specialty malt, but it can be used as a base malt,” Stueck explains. “By using just Vienna as a base malt, I’ll get some nice orangey color to it, without adding crystal malt.”

It’s kind of out there, Stueck admits, but out there is his bread and butter.

“[My job] is to work with new brewing practices, new ingredients, coming up with new innovative ways to brew,” Stueck says. “Also, to satisfy the Boulder palate, which is a very refined palate. They’re used to strange and very complex beer flavors.”

With roots reaching back to Santa Ana, California, in 1978, BJ’s came to Colorado in 1995 when then-brewer Alex Puchner attended the Great American Beer Festival. On a tip, Puchner checked out a vacant bar on the Pearl Street Mall and decided it would make an ideal place for a BJ’s Brewpub. It opened in February 1997.

Stueck started brewing for BJ’s at the original location, and when the facility relocated to Twenty-Ninth Street in 2012, Stueck was promoted to Head Brewer of Research & Development.

Working with a three-barrel brewhouse and a half-dozen oak barrels, Stueck tries out a variety of recipes to determine which ones work with customers, and which are scalable for BJ’s production facilities, which supplies 204 restaurants across 27 states with beer.

But not every beer is practical on a production scale. Take Stueck’s Ginger IPA, which uses one pound of fresh, diced ginger per barrel. Recreating the recipe on a 60-barrel system is out of the question.

“We’re talking about 60 pounds of ginger that you have to put in the kettle, and then somehow get out of the kettle,” Stueck says. “But it really makes for a unique beer experience here.”

Stueck estimates he comes up with 30 new recipes a year.

“Maybe three of those will go nationwide,” he says.

But for Boulder drinkers, BJ’s offers more than a rotating selection of seasonals: From Ginger IPAs and Belgian Quads to Fastenbocks and gose aged in tequila barrels. Even a Vienna IPA. At Boulder’s BJ’s, nothing is off the table.