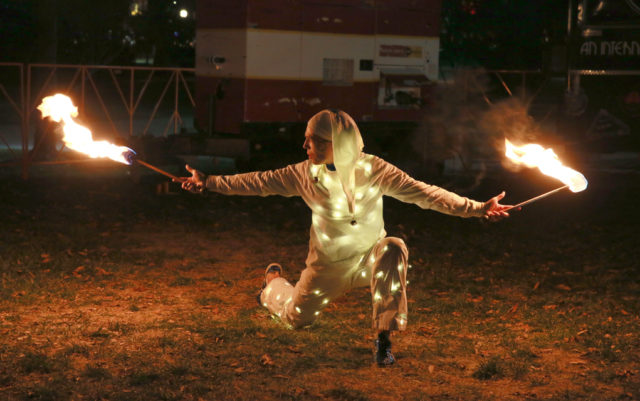 Few breweries throw a party quite like Left Hand Brewing. Not only has the Longmont staple consistently put out top-shelf beer for the past 25 years; its slate of festivals and charity events remain iconic. And for the past five years, the best by far celebrates the velvety side of brew: Nitro Fest, benefiting the Left Hand Brewing Foundation.

Held the second Saturday in November — be it snow, bone-chilling cold or a perfectly pleasant autumn evening — Nitro Fest brings together 30 breweries pouring over 100 beers, all of them nitrogenated, under a big circus tent populated with fire dancers, aerialist and more. The dress request is Voodoo Masquerade — think Mardi Gras meets Day of the Dead — and amid the din of costumed drinkers and circus acts, Marchfourth and Big Something will take the stage to pound out the seductive rhythms of rock, pop and funk. As Joshua Goldberg, Left Hand’s former community and events manager, once said, “It’s not just another beer fest.”

Unlike so many other beer festivals, Nitro Fest is soaked in identity. Not only is it America’s sole nitrogenated beer festival, but the invite-only pour list also looks beyond America’s borders, welcoming brewers far and wide. Last year’s festival saw the addition of DevilCraft, Magpie Brewing Co. and Metalman Brewing Co., hailing from Japan, South Korea and Ireland respectively. The international trend continues this year with the return of DevilCraft and Magpie, along with seven more: Great Leap Brewing and No. 18 Brewing, both from China, Croatia’s LAB Split Craft Brewery, Hong Kong’s Young Masters Brewery, Hungary’s Reketye Brewery, Italy’s Birrifico Italiano and UK’s Magic Rock Brewing.

It would take more space than allotted here to understand how nitro beers perform in foreign markets, but the inclusion of these international brewers speaks to the continued expansion of the beer market. Yes, traditional methods and local styles still have a massive foothold, but Nitro Fest shows that brewers are open to new possibilities and new techniques.

But enough about what this all means on a bigger scale, you came here to find out what to drink. Well, you have options and plenty of them. Naturally, the host brewery has multiple taps of the silky smooth stuff to quaff: Sawtooth Amber, Chia Milk Stout and the beastly Wake Up Dead Russian Imperial Stout.

The list goes on: 3 Sheeps Brewing Co. from Wisconsin, Cape Mary Brewing Co. from New Jersey, MadTree Brewing Co. from Ohio; as well as all those Boulder County favorites: Boulder Beer, Mountain Sun, Liquid Mechanics, Wibby and more. There’s just too many list. Besides, it’s much more fun to drink them. See you in the tent.