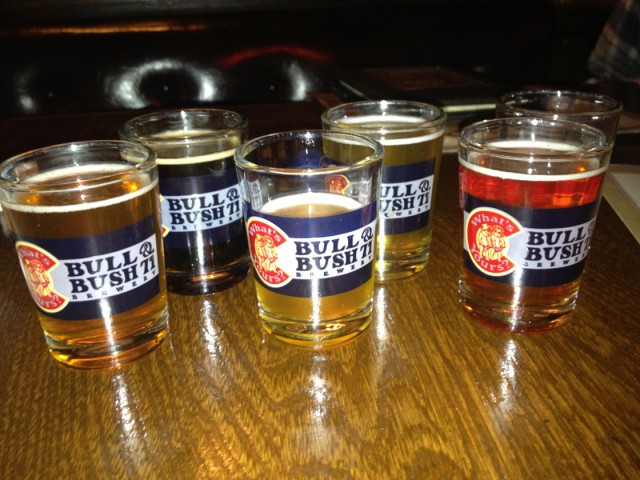 Crossing into the dim, lantern-lit interior of the Bull & Bush Pub & Brewery is like stepping back in time.

To when, I don’t know. Bull & Bush has as much history as any brewery in the state: It draws its name from a British establishment built in (or before) 1645, and it was built in 1971 in Glendale near the childhood home of its twin founders, Dale and Dean Patterson. In its early years, the Bull & Bush became “the nation’s first sports bar,” its website says, by having satellite dishes placed on the roof.

Now I wish I were getting a beer at The Old Bull and Bush, this bar’s namesake in Hampstead Heath, London, because who doesn’t want to get an English ale in England? But sliding into a leather booth at Bull & Bush does feel like crossing an ocean from Boulder. For all their positives, Boulder breweries are almost entirely relegated to warehouses and industrial parks — even older, more established ones like Boulder Beer and Avery. Those two have clearly transformed their spaces into bars, but the newer breweries — J Wells, Wild Woods, Sanitas, Kettle & Stone, Front Range, on and on — can’t really help but go with the clean, open, poured-concrete aesthetic. Most of them just signed their leases; the history of their building is pretty much “warehouse.”

And there’s nothing wrong with clean and industrial. It’s just nice to grab a beer somewhere with a unique atmosphere. Bull & Bush is somewhere between a dim British pub and a sports bar: TVs broadcast Dolphins vs. Saints with sound; mugs hang in rows over the copper-topped bar; chandeliers dangle red-lantern lights over dark wood tables and, unheard-of in so many taprooms, a carpet.

Do I like carpet? I do not. But here it’s just right. Fran and I celebrate the atmosphere with the detail game, studying the tasting room top to bottom.

“This feels like a pub in a small town in the mountains where everybody goes,” Fran says.

I’m in Glendale after hitting the Cherry Creek Mall, acknowledging I have zero appropriate clothes for an upcoming wedding. Or, to put it another way, “You got a column and an outfit,” Fran says. “Very Sex and the City.”

The beer list at Bull & Bush changes daily, with some emphasis on lighter ales. The Allgood Amber is balanced between malt and hops and is slightly watery; the 4.0 GPA (that’s grapefruit pale ale) has a very strong, clean pale ale aftertaste.

“I get grapefruit, as a woman,” Fran says. “I taste citrus.”

The stout, Stonehenge, is a classic, thick, grainy and malty. But the best beers are the Marriage and the MAN. A Belgian golden ale, Marriage is not overly yeasty or sweet; MAN, Bull & Bush’s signature IPA, is a very balanced IPA that’s malty upfront and avoids bitterness in the aftertaste.

Yes, I liked an IPA. Beer lovers can take me seriously now.

But really, I can see at Bull & Bush how much I’ve changed in writing this column. I don’t have to seek out the brown, porter or stout on every menu any more, even if I usually still do. I can taste IPAs on their own terms now instead of recoiling from them all.

In the spirit of variety, we’re looking at touring Boulder County again — not as a thorough inventory this time, but as a tour of authenticity. We’ll be tracking down the most authentic Belgian, German, British and American beers in the county over the next few weeks. Like with Bull & Bush, we wish we were going to those places for real. But maybe, just maybe, beer can transport us there.