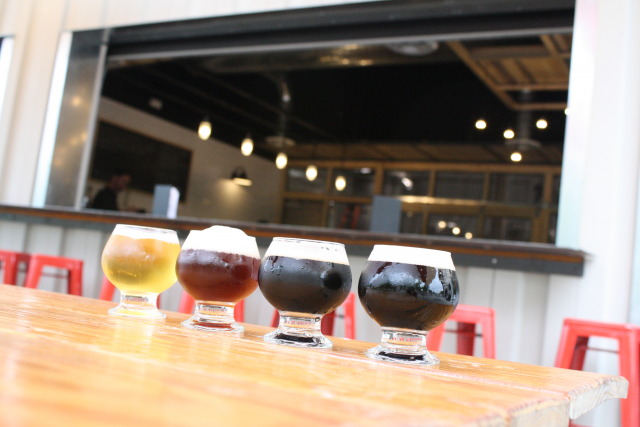 We all enjoy being in on a good secret. I mean, if it’s a harmless, fun kind of secret, not the other kind. We all like knowing about the shortcut home, the secret menu item, the password, where the unmarked door will lead.

Or maybe that’s just me. Maybe it’s some kind of complex, buying into “knowledge is power” and wanting to be more powerful than others. Maybe it’s about feeling special. I do know the fun comes not in knowing the secret but in showing it off, partially or fully. If I say I know a secret and stop there, not fun. But if I say there’s a bar in downtown Denver that marks down a drink at certain times during winter, well, I’m giggling with glee over here.

So it was with some trepidation, writing last week’s Tidbites, that I shared a more or less secret item on Sanitas Brewing Company’s menu, a discount on the brewery’s Train Beer series when a train passes by the taproom. One fewer secret to celebrate.

Then again, it looks like secrets wouldn’t last long at Sanitas. The past few months, its opening has been highly anticipated, even beyond a new brewery’s usual enthusiastic reception. In the midst of an East County explosion — Twelve Degree and Gravity in Louisville, Kettle & Stone in Gunbarrel and Front Range and Odd13 in Lafayette have opened recently — Sanitas is in Boulder itself, and not far from the mad rush of Pearl and 28th Street.

The anticipation has definitely turned into traffic in the taproom. When I stopped by before Sanitas opened, six beers were on tap. After four days of operation, four beers remained, with the white IPA and imperial brown ale already tapped. On a Tuesday at 4:30, Jeff and I marvel at the number of people at Sanitas who evidently don’t need to be at work — and remind ourselves that Sanitas is one of about 15 taprooms across the city drawing in crowds at that hour.

I get a sample of all four, from the buttery, not-yeasty-at-all saison (“One of the more mild-mannered saisons I’ve had,” Elizabeth says) to the black IPA on nitro — which might be the best use of a nitro tap I’ve had, as the creaminess and smoothness contribute a new element to the black IPA, rather than just piling on more creaminess like with a stout on nitro. Both on tap and on nitro, the black IPA has a hoppy finish, and it’s the favorite among the staff, with Jeff and Joel both ordering one. “That’s steal-worthy,” Elizabeth says.

The first installment of the Train Beer series is a session ale similar to an English dark mild, with a caramel, slightly bitter taste. Unfortunately, we’re paying full price, thanks to an absence of trains.

Sanitas won’t have empty taps for long. Calling their current saison a “baseline,” the brewers say they’ll be experimenting with other Belgian styles and variations on their brown ale.

If I learn more, unfortunately for me, I’m kind of obligated as a journalist to share. That’s OK. If nothing else, I can keep to myself the seven-letter code word that lets you drink for free all night.