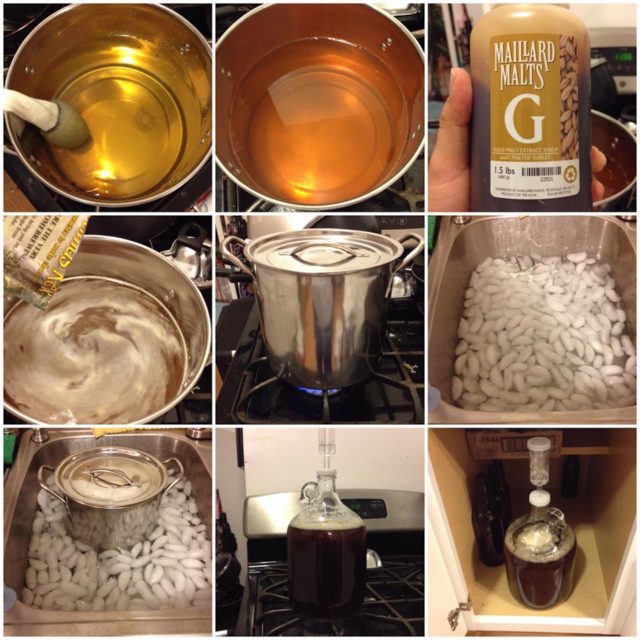 Making beer at home doesn’t have to be a daunting task. If you’ve ever made a pot of soup, chances are you already have some of the equipment needed to make your very own small batch of beer.

An easy way to get started is to brew a small batch SMaSH recipe. “SMaSH” is an acronym that means single malt and single hop. It’s the old adage of keeping it simple. You literally use one type of base malt and one hop variety. It’s a great method to introduce your palate to the aromas, flavors and bitterness featured in the malt and hop used.

Get a stockpot that can fit at least two gallons of water. Then, dig through that kitchen drawer and find the longest spoon you have, preferably a non-wooden one — stainless steel and silicone clean up easier. Grab a measuring cup (one quart or larger) for collecting water. To keep it simple and economical, you can reuse plastic soda bottles (they hold the equivalent of nine 12-oz. bottles) when it’s time to bottle. Be sure to save the caps. Also, a small digital scale will be helpful when weighing out malt and hops.

You’ll need to get a fermenter (one-gallon glass carboy or plastic food grade bucket with lid), an airlock, mini auto-siphon, food-grade vinyl tubing, bottle filler, carbonation tablets and some sanitizer (use Star San). Don’t worry; your local homebrew shop will have all this and more. Ask questions.

Collect and heat 1.75 gallons of water in your stockpot. If your tap water tastes good, use it. If not, buy some spring water. Before water reaches boiling temp, add the DME and dissolve by stirring with your long spoon. This is your wort (unfermented beer).

After 60 minutes of boiling, chill your wort with an ice bath (literally, place your stock pot in ice water) in the kitchen sink. You need to chill the wort for safe transfer to the fermenter before you can pitch the yeast.

Be sure to sanitize any equipment the wort will touch post-boil (this is where the Star San comes in). Then, once the wort is chilled, use the auto-siphon to transfer the wort into the fermenter. Next, pitch the yeast (use half of the packet). Stick on the airlock and place the fermenter in a cool place out of direct light for two weeks. A kitchen cupboard works.

After that, you’re ready to bottle. First, sanitize the bottles and caps you plan to fill, then use the bottle filler to fill soda bottles leaving at least an inch of headspace. Add carbonation tablets per instructions on the package, and store bottles at room temperature, away from direct light. Allow two weeks to carbonate. When carbonated, chill bottles in the fridge. Now it’s ready to drink. Cheers!

The perks of small-batch brewing

Small-batch brewing is any homebrew recipe measuring less than five gallons in volume. It’s typical for first-time brewers to start with five-gallon recipes, and never look back. Before you know it, you’re sourcing chest freezers, converting them into fermentation chambers, buying carbon dioxide tanks, oxygen tanks, propane jet burners and haggling keg prices from brewers with screen names like, “Cerveza Stalone” on OfferUp. Space can quickly become an issue.

The beauty of small batches is that you can brew, ferment and bottle condition in the comfort of your kitchen. Right on your stove.

Minimal space is required as the equipment is much smaller than a typical setup. A one-gallon small batch will yield just over a six-pack of 12-oz. bottles. That’s great for a solo brewer who has no one to share with at home. That’s a perk in itself, right?

Small-batch brewing is also a more economical way to get into the hobby. Fewer ingredients mean less money spent, which allows you to experiment and use malt or hops that might cost too much when used in a bigger batch. And hey, if that chocolate cucumber stout doesn’t quite drink like the gold medal winner you imagined, dumping one gallon of beer down the kitchen sink isn’t a problem.