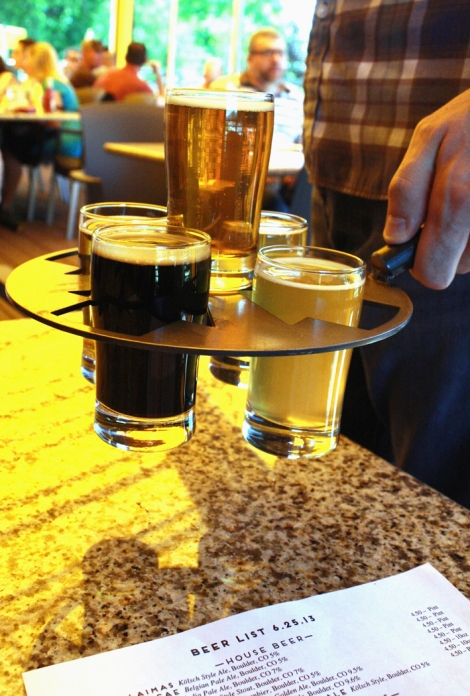 In the nearly two years since FATE Brewing has been open and brewing they have garnered numerous accolades, including being named one of 10 New Breweries to Watch by Bon Appétit in 2014, and winning a gold medal for their Laimas Kölsch Style Ale at this year’s Great American Beer Festival. On top of that, it has become one of the best places in Boulder to grab a great beer from one of their 30 tap-lines.

But that success created a serious capacity problem.

“Demand for our IPA and Kölsch was taking up too much space in the fermenters and effectively knocking two to three specialty beers out of rotation,” says owner Mike Lawinski. “Not a bad problem to have — high demand — but we built this brewery to always have numerous different offerings, so I knew we had to figure something out.”

That something was 2,500 square feet right next door.

The brewery’s neighbor, Boulder Lamp, Inc., decided to relocate this year and FATE will be taking over the space to expand its brewing operation.

“When we built our brewery, we had an eye on the future, we set it up to be able to add fermenters and holding tanks as needed. Well, that day is upon us much sooner than planned,” says Lawinski. “When the opportunity came to take over a space right next door, we knew we had to jump on it.”

The plan is to turn the old Boulder Lamp studio into a playground for head brewer Jeff Griffith to expand FATE’s fledgling barrel-aging program into a full-time endeavor.

“We have 15 barrels waiting to be filled as soon as we get the paperwork approved. That will join our approximately 30 to 40 barrels we already have aging,” says Lawinski. “In fact, Jeff was just filling barrels for our third year anniversary beer the other day. Should be great when we break it out in the new space in 12 months.”

The barrel room will be open to the public and will also be available for large parties or events, with its own satellite tap system pouring different experimental beers.

Once FATE moves the barrels currently filling its brewhouse floor into the new space, it will be able to increase fermentation capabilities from 112 barrels to 178 barrels. That’s 21,824 more pints of beer at any given time — good news for beer lovers.

The expansion also will help FATE address another issue it is struggling with: canning and bottling. FATE periodically releases some of its most popular beers (IPA, Watermelon Kölsch) that are packaged by a mobile canning company. With the new space in the brewhouse, FATE will be installing its own canning line from Boulder’s own Wild Goose to complement its four-bottle bomber-filler already in place. Expect to see more of their beers on sale at liquor stores soon.

Work is expected to begin within a month and be finished during the first half of next year. Seems the fates are aligning for more good beer.