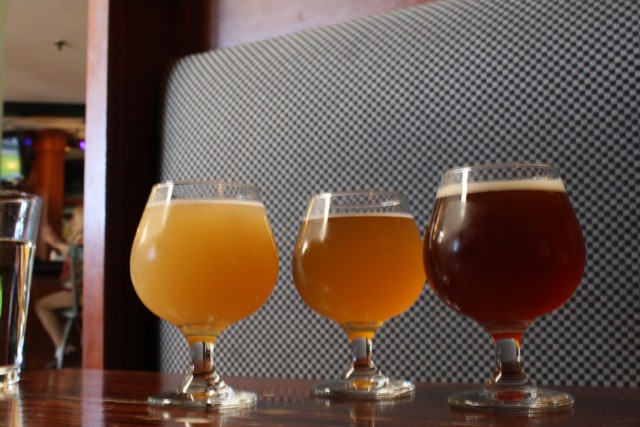 Read carefully. Always ask your server. And maybe bring a dictionary. Those are the hard lessons Jeff learned in a visit to Backcountry Pizza & Tap House.

We aren’t going to every restaurant with a good beer list. In Boulder, that would be an endless task. But Backcountry probably holds the title for biggest tap list in Boulder, rivaled only by Old Chicago, and it’s as much a beer destination as anywhere else in the county.

And it’s an opportunity to look beyond Boulder County for interesting beer, as Backcountry brings in kegs — not to mention bottles, with its incredibly long bottled beer list — from around the world. Backcountry has taps on from the U.S., of course; Belgium; Denmark; and Italy. Bottles come from Spain, New Zealand, Scotland, Sweden, Switzerland, Japan — almost anywhere on the map.

But on a recent lunch trip, we keep it close: Elizabeth and Jeff opt for lesser-distributed Colorado beers, while I try a Chicago creation. That brings us to Jeff ’s choice, the 7 Day Gueuze from Trinity Brewing in Colorado Springs. Now, if Jeff had known that gueuze is a Belgian sour — Trinity’s own website calls the beer 7 Day Sour — he might have thought twice. And if he had known that this particular sour turned out to be one of the sourest beers he’d ever had, he might have thought more than twice. Instead, he’s lunging for his water immediately after taking a sip. 7 Day is simply a puckerfest, nothing more.

“It’s like if the Sour Patch Kids ended up …” Elizabeth starts, searching for the right metaphor.

“Making a beer,” Jeff suggests. He nearly finishes the whole thing, to my surprise.

So, OK, a misstep there. Lesson learned about “gueuze,” if we ever see the term again. Unfortunately, Elizabeth’s choice is not so different. Her pick, Black Bottle Brewery’s Home Brewers Do It in the Garage, is also a sour, albeit quite a bit less sour than Jeff ’s. It does resemble beer, at least. The name’s a bit confusing — the homebrewers I know have never attempted sours; you’d think a homebrewer reference would fit a pale ale, not a sour — but the flavor is balanced.

I clearly picked the winner that day with Morning Wood, an oak-aged coffee ale from Chicago’s Local Option Bierwerker. Apparently based on an amber ale, it’s got definite wood notes along with a coffee scent and flavor. While Morning Wood is oak-aged and has coffee added, neither dominates the flavor.

As we pack it up after just one beer — a crime at Backcountry, but it’s a lunch trip — Elizabeth notes a flaw in the Backcountry setup that, if we were petty people, we could blame for the unexpected sours. Each table only has one beer list, a massive tome of beer after beer. Each of us probably wanted half an hour with that thing to flip back and forth, weigh our options and pick our beer. We say menus for all. Reading up on all those beers is a task that just can’t be rushed — at least not without running a big risk. Just ask Jeff, when he finally untwists his face.