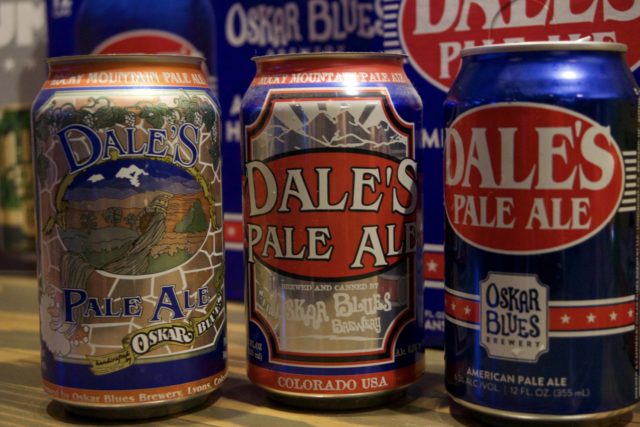 Stepping into Lyons’ Oskar Blues Grill & Brew is like stepping into the past. Wood dominates; the décor is cluttered, cozy and a little dusty. Stickers from other breweries cover surfaces like reward decals on a college football player’s helmet.

Even the tap list is a tribute to the glory of yesteryear: One column of core beers, the other of seasonals and guest brews. And, should you visit during happy hour — or Rad Hour, as they call it — you can enjoy one of those core beers for $3.50. That’s a hard price to beat in this day and age.

But when Oskar Blues first opened in 1997, all of its beers were guests. It wasn’t until brewmaster Brian Lutz formulated Dale’s Pale Ale in ’98 that the restaurant got its signature ale.

Twenty-plus years later, Dale’s is still a “voluminously hopped mutha” of a pale: Crystal clear with a pile of foam, sweet, full-bodied malt with snappy, citrusy hops. The beer is bitter (65 international bittering units) and cuts through just about anything you have on the table.

Dale’s is still OB’s flagship beer, but, as of January 2020, Dale’s has a new look. Gone are the Rocky Mountains and busy labels. Now, it’s a simple red, white and blue, the name of the beer and the brewery that makes it.

Dale’s has been, and probably always will be, the beer most drinkers associate Oskar Blues with. It was the first Colorado craft beer packaged in cans, and it was the first craft beer served on an airline (Frontier). And as Dale’s traveled the country, the ale became more recognizable than the brewery. According to owner Dale Katechis, restaurants on the East Coast often listed other OB offerings, like Mama’s Little Yella Pils, as Dale’s Mama’s Little Yella Pils

Mama’s Little Yella Pils also got a new can design, as did OB’s other core brands (Old Chub Scotch Ale, G’Knight Imperial Red IPA). It’s a way to keep up with the myriad breweries out there regularly serving up something new, as are OB’s three new labels: Can-O-Bliss (juicy IPAs), Slow Chill (malty lagers) and Death By… (adjunct-laden pastry beers for drinkers with a sweet tooth).

But the whole notion of flagships has changed in the past decade. Breweries that were once defined by a signature beer (Arrogant Bastard, Boston Lager, Fat Tire, etc.) are pushing new brands and new beers. Newer breweries aren’t even touting one particular style, choosing to stay flexible over recognizable. Greeley’s WeldWerks Brewing Co. (established 2015) was first known for its Hefeweizen before Juicy Bits (a hazy/juicy IPA) came along. Now even that award winner gets overlooked for Medianoche (an imperial stout) and a constant rotation of brews — over 150 new beers a year.

If you were to open a brewery in 2020, chances are you wouldn’t settle on a flagship beer, but a never-ending rotation of experimentation and trend spotting. That makes the Dale’s of the market all the more valuable. May they never fade away.