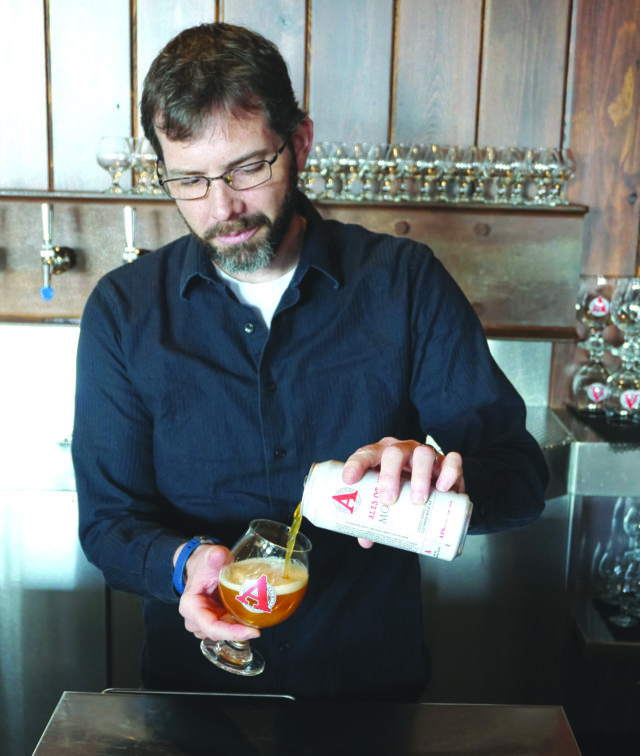 With 30 beers to choose from, a visit to Avery Brewing Co.’s taproom can be either a daunting proposition or an endless array of excitement — depending on your point of view. And if the choice is too much, just ask for what’s new. You could end up with a stout aged on malted milk balls, a hazy IPA loaded with pears and peaches, or a barrel-fermented persimmon wheat ale inspired by an early 19th-century recipe found at Thomas Jefferson’s Virginia estate.

Bearing the name of the historic home, Monticello is the 10th release in Avery’s Ales of Antiquity series, a line of historical recreations helmed by Travis Rupp, Avery’s resident “beer archeologist.”

Rupp kicked off Ales of Antiquities in 2016 with Nestor’s Cup: A Mycenaean-inspired beer brewed with 6-row barley, einkorn wheat, acorn flour, figs and elderberries. The recipe was recreated both from extensive archeological research — Rupp is a professor of Classics at CU-Boulder — as well as Rupp’s academic scrutiny of “art history and the anthropology.”

“What do we actually know of these people?” Rupp says of his process. “What was important to them? What’s readily being mass-produced, agriculturally, that we know they actually give up to make a beer?”

The results spoke for themselves — Nestor’s Cup was phenomenal: loads of fruit leather and a mouthfeel unlike anything else — and Ales of Antiquities was off and running.

Rupp has traversed great distances and eras to recreate beers from Egypt, Peru and Scandinavia, to name three. Recently, he spent time researching the 18th and 19th centuries to produce an IPA inspired by George Hodgson’s exported brew of 1752, an English-style porter favored by George Washington, and now Monticello, the second in the Presidentale [his emphasis] series.

Thanks to Jefferson’s extensive archives, Rupp was able to reproduce the ale faithfully.

“I want to make it as authentic as possible,” Rupp says. “I don’t want to deviate from the historical record.”

That starts with the name, Monticello: This was not the beer brewed by Jefferson, but for Jefferson and his estate by Jefferson’s slave, Peter Hemmings.

Brewed with wheat and persimmons, Monticello is fruity and tart — think apples and tomatoes — with a full, creamy mouth that is rich and filling. According to Rupp, it’s similar to the persimmon bread baked at the time.

Monticello will be released at Avery’s taproom on Monday, Feb. 17, and Rupp will host a beer dinner on Feb. 19 to commemorate the launch (tickets are currently sold out). Rupp will also be talking Ales of Antiquity, 6-8 p.m. Monday, Feb. 24 at Denver’s History Colorado Center in conjunction with the center’s exhibit, Beer Here! Brewing the New West. Tickets and information at historycolorado.org.