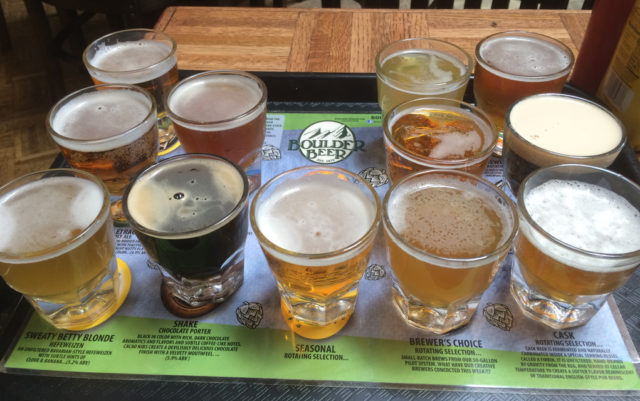 I wanted a mission, and for my sins, they gave me one.” — Capt. Benjamin Willard in Apocalypse Now

Go forth and drink, young man!” Boulder Weekly’s editorial staff commanded and I complied. The mission: Visit and document each and every one of Boulder’s craft breweries. Many are nestled alongside the Flatirons, and they are legion. Was I up to the challenge? Sir. Yes, sir. Thank you, sir. May I have another?

Founded in 1979 by two University of Colorado professors, Boulder Beer was originally established in northeast Boulder on a small goat farm. Five years later, they moved to the transit village at Valmont and Foothills Parkway, and they’ve been there ever since.

Still a working brewery, Boulder Beer has since converted their tasting room into a full-service pub — aptly named The Pub. In the dining room you’ll get a good view of the copper fermentation tanks and overhear the brewmasters discuss dry-hopping while they traipse back and forth between the back offices and the bar.

But atmosphere isn’t the reasons we’re here; it’s the beer. Drop $18 and pick up the full tasting flight, 13 samples of what is currently on tap — seven staples and six seasonal. Their original gangster, Buffalo Gold (4.8% ABV), has been a Colorado favorite since 1989 and goes down as easy and inoffensively as a Coors. That sounds like a knock, but its not. Sometimes you just want something cold and malty, and the less you have to think about it, the better. Gonna watch the Buffs or Broncos? Buffalo Gold is the way to go. Catching a Rockies game? You’re going to want something stronger.

Probably the two most well-known beers produced by Boulder Beer are Hazed, a hoppy session ale (5% ABV), and Mojo IPA (7.2% ABV). Both do the trick, but they pale in comparison to the grandeur that is the Shake Chocolate Porter (5.9% ABV), a rich, dark porter made with cacao nibs. Its velvety texture is akin to the leftover milk from a bowl of Coco Krispies — it’s nostalgia fermented. The Shake can be found in bombers pretty much everywhere, but The Pub is where you will also find it on nitro, which adds a little more complexity and a whole lot more flavor.

If the Shake is a bit heavy for hot summer days, Boulder Beer has Pulp Fusion (6.5% ABV), a blood orange IPA that is vibrant, light and citrusy, and Sweaty Betty (5.2% ABV), a blonde hefeweizen that boasts hints of banana. The Pub’s food menu offers beer-pairing suggestions, and the Sweaty Betty is their most versatile, designed for just about everyone.

And that seems to be about Boulder Beer’s modus operandi.

“Who’s got two thumbs and is done for the day?” a bearded brewer proclaims, tossing his folder down on a table and picking up a pint. Another employee concludes the daily-guided tour of the facility to applause. Another salutes an entering patron destined for the bar. Boulder Beer is a loose atmosphere that pulses with activity and energy, and it pairs nicely with a pint.