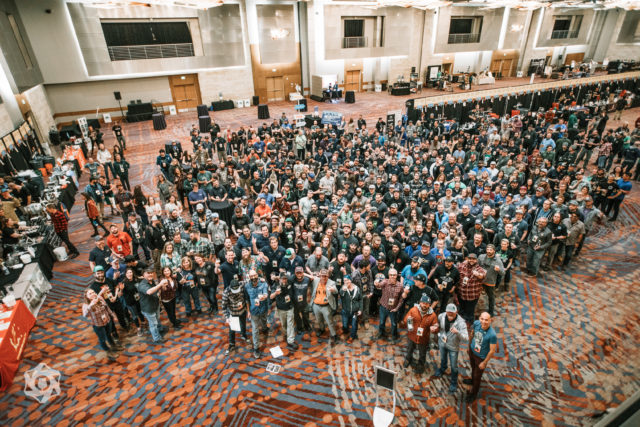 Editor’s note: In a statement issued on March 12, the Colorado Brewers Guild (CBG) has cancelled Collaboration Festival 2020 indefinitely: After careful deliberation and discussions with community partners, city officials and stakeholders, the Colorado Brewers Guild has announced today that the 7th Annual Collaboration Fest on April 4, 2020 at the Fillmore Auditorium will be suspended indefinitely due to the ongoing situation surrounding Coronavirus (COVID-19).

However, the below information may still be of some use. CBG’s statement continues: “We still hope to celebrate Colorado Pint Day on Wednesday, April 8th, with the possibility of incorporating the 100+ beers brewed for Collaboration Fest, and we’re working on other ways to showcase the amazing range of unique collaboration beers that nearly 200 breweries put their hearts into for the event,” says Bergen. “Stay tuned for more information.”

As usual, CollabFest 2020 will be held in Denver, this year at the Fillmore Auditorium (a first for the fest). And, like previous years, CollabFest (April 4) will kick off Colorado Craft Beer Week (April 5-11).

Capital, you’re saying to yourself, but what kind of beer will I be able to drink at said CollabFest? Well, how about…

…a Pale Ale brewed by the Colorado Brewers Guild staff?

…a Coffee Scotch Ale brewed by members of the media?

Like last year, and the year before, beer writers of the Centennial State gathered at a chosen brewery to brew a beer for attendees to enjoy. This year, Odyssey Beerwerks played host and whipped up an 11-barrel batch of Scotch Ale brewed with floor malted Marris Otter, Vienna, roasted barley, East Kent Golding hops and aged on freshly roasted coffee beans from Hunter Bay Coffee Roasters. Enjoy.

…a Hazy Double IPA from two titans of craft beer?

Recently celebrating its 30th anniversary, Odell Brewing Company continues to put out some of the best beer in the market. Currently celebrating its 40th anniversary, Sierra Nevada Brewing Company is the gold standard by which all others are measured. You’d be foolish to pass up any beer one or the other puts out, but together — and with a shared passion for hops — this might be the best beer at the fest.

…a Pale Ale from two of Colorado’s premier purveyors of pale?

Founded in 2013, Cannonball Creek Brewing Company has won at least one Great American Beer Festival medal every year since. A feat Bootstrap Brewing’s Steve Kaczeus is quick to point out with admiration. And from friendly competition comes collaboration: Hop Shillelagh Pale Ale (they briefly considered using the portmanteau, Ballstrap, but thought better). Regardless, a pale by any other name from these two will still be a hoppy treat.

Tickets to the seventh annual Collaboration Festival (3 p.m., April 4) are currently on sale at collabfest.beer.