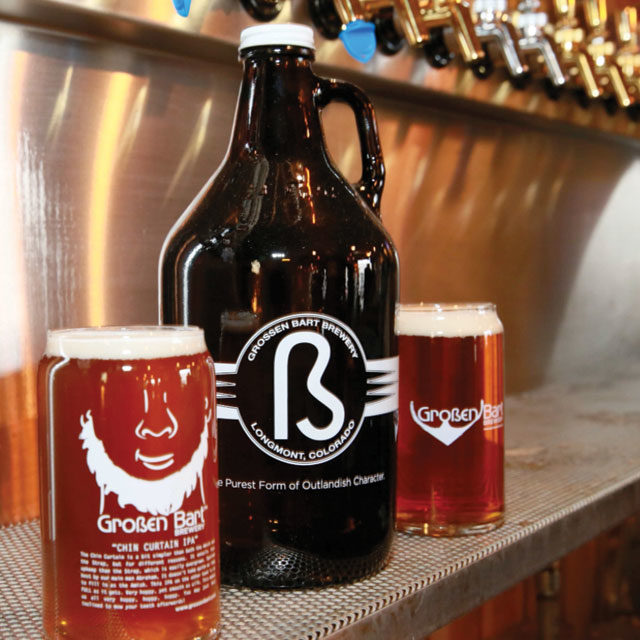 Colorado is the state of craft beer. If you brew it, we will drink it; but you have to do something to stand out and separate yourself from the pack. You need a hook and at Großen Bart Brewery, that hook is hair.

Facial hair that is. And now that we are solidly into Movember — the month where men grow out their mustaches to raise awareness for men’s health issues — what better place to celebrate the month than with a brewery where the beer is crafted to match the stache?

With a familiar layout — the brewery in the back and the taproom up front — Großen Bart has a simple charm to it.

Großen (pronounced Grossen) Bart is German for “big beard” and each one of Großen Bart’s offerings is connected with a particular style of beard/mustache, complete with handy images on the tasting menu. There are 10 or so beers on tap, with three standards — Stubble Kölsch (4.83% ABV), Chin Curtain IPA (7.1%) and Anker Beard Amber (5.4%) — and a rotating selection of heavy hitters. Order yourself a flight of five for $10, and the glasses come in a metal tasting holster cut into the shape of, you guessed it, a mustache. There certainly isn’t any confusion as to what the M.O. is here.

If you are a clean-shaven rookie, prime yourself with the Stubble Kölsch, and your five o’clock shadow will appear. Kölsch is a light, effervescent, easy-drinking beer, and with a hint of tree fruit, the Stubble will get you on your way to Großen Bart’s shaggier offerings.

Both the Hulihee Irish Red (5.6%) and Friendly Mutton Chop Märzen (6.6%) are perfect fall beers. With a hint of spice, this märzen is a full-bodied amber that has the crispness of an autumn afternoon. Hulihees are beefier versions of mutton chops, and the beer matches. It has a toasty profile that will keep your face warm from cool nights and sudden gusts.

The Inca Tern Porter (5.2%) is named after the Inca Tern birds of Chile and Peru, which are easily identified by their Salvador Dalí-like white mustaches. Porter is a beer that beckons the snow, and the Inca Tern deserves to be served next to a roaring fire. To boot, for every pint of the Inca Tern that Großen Bart sells, $1 will be donated to the American Bird Conservancy.

And if the birds can get involved in Movember, so can the ladies. The Frida SMaSH Imperial IPA (9%) is a single malt, single hop IPA made in honor of the famous Mexican painter Frida Kahlo, who not only embraced the monobrow but the mustache as well. The Frida is smooth, fruity and potent. To quote the brewery pouring the samples, “It’s like a peach had sex with a nectarine in a pine forest.”

There is a sign that hangs on the tap wall that reads: The Purest Form Of Outlandish Character. How appropriate.