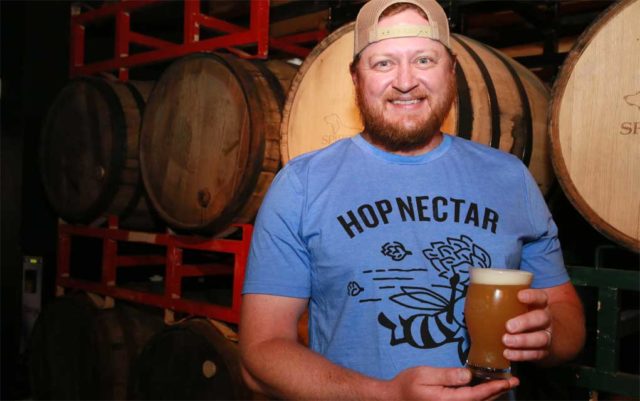 It’s always important to know which side your bread is buttered on and the Liquid Mechanics Brewing Co. seems to know exactly where that is.

Located on the corner of Baseline and U.S. 287, in a lot where you can also get your teeth cleaned and rescue a stray animal, Liquid Mechanics is smack dab in the Lafayette suburbs and loving it — there is even a footpath connecting the adjacent neighborhood to Liquid Mechanics’ parking lot. Hell, the food truck parked outside the night we paid them a visit was Suburban Wiener, whose logo is a giant knackwurst behind a white picket fence. They are consistent, to say the least.

Ten years ago, craft beer drinkers would have scoffed at the idea of suburban breweries. But times have changed, and the hip literati have vacated the city centers in search of affordable real estate to raise their families. For these well-traveled drinkers, neighborhood Applebee’s and Chili’s simply won’t do. They want something more than giant novelty glasses of Bud Light while staring down heaping plates of chicken parmesan, shrimp wonton stir fry and baby back ribs, all surrounding a bottomless serving of chips and salsa. These places offer something for everyone — and nothing for anyone — and those of us who call the ’burbs home aren’t going to take it anymore.

For us, we have Liquid Mechanics. With plenty of parking, a large patio, loads of indoors seating for weekly bouts of Geeks Who Drink trivia and a room in the back for private parties, Liquid Mechanics has the savvy suburban drinker covered. The beer’s pretty good too.

Started by Seth Townsend, Eric Briggs and Davin Helden — all former biotech/pharmaceutical professionals — Liquid Mechanics is a 10-barrel brewing system that focuses primarily on American, German and Belgian ales, with a couple of wild cards thrown in. They are most recognized for their Amber Altbier (5.4 percent alcohol by volume) and their Kölsch (5.3 percent). Both are award winners and both are bonafide thirst-quenchers, easy and clean with no detractions. A good friend of mine loves to drink good beer but hates to be told what in the beer makes it good. For him, Liquid Mechanic’s Altbier and Kölsch will suffice. For me, the hazy, juicy New England Hop Nectar (5.3 percent) sets the pins up and the onion-y (in a good way) Belgian Double IPA (8.5 percent) knocks them down.

Like every other brewery around town, Liquid Mechanics has the usual rotators, but unlike everyone else, Liquid Mechanics has a Peanut Butter Porter (8.6 percent) that smells exactly like the filling in everybody’s favorite peanut butter cup. The taste doesn’t quite match, but how could it? Have you ever looked at the wrapper and read what’s in it? I don’t want that nonsense anywhere near my glass. Sure, I’ll sit on the couch, watch basketball and shovel those little beauties into my mouth without batting an eye. But drinking? That’s a sacred act and should be treated with respect. And with the Peanut Butter Porter, the guys at Liquid Mechanics do just that.