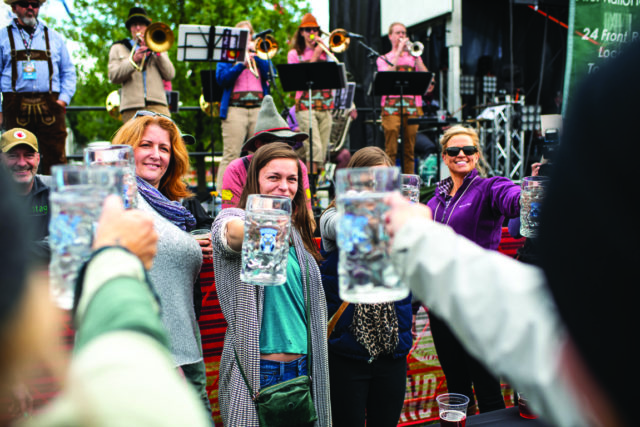 From tailgates to tailored beer dinners, there is a good deal of tradition in beer drinking. And when it comes to hoisting a stein or six, no tradition is as great, or as popular, as Oktoberfest.

Dating back to October 1810 in the Kingdom of Bavaria, Oktoberfest was first a wedding: The nuptial celebration of Ludwig I and Crown Princess Theresa, held in the capital city of Munich. The entire city was invited, and a horse race marked the occasion. Beer was consumed — this was Bavaria, after all — and the festivities lasted five days. The wedding was such a hit; Bavarians decided to commemorate it the following October with the very first Oktoberfest, reenacting the previous year’s celebration while also boosting the local agricultural industry.

The trend continued — except in 1813 due to the Napoleonic Wars — and by 1819, the citizens of Munich took over organizational duties and used the festival to help bolster the local economy. Five days became two weeks, and Oktoberfest was moved from October to September because the weather was nicer.

The first Oktoberfest parade was held in 1887. By 1896, beer tents and beer halls — all sponsored by local breweries — were ubiquitous. In 1910, over 7,000 barrels of beer were consumed for the 100th anniversary.

A trip to Munich’s Oktoberfest is something every self-respecting beer drinker should have on their bucket list. Nowadays, the fortnight festivities are a far cry from what they once were, as the races and competitions have been pushed aside to make way for 7 million visitors. But here in the Centennial State, that spirit and those traditions are alive and well. Most of your local breweries hold some version of an Oktoberfest, and many have already come and gone. Here are but two worth the trek.

Longmont Oktoberfest (Roosevelt Park, 700 Longs Peak Ave., Longmont) Fri., Sept. 20, 4-10 p.m., Sat., Sept. 21, 12-10 p.m. Hosted by the Left Hand Brewing Company, Longmont Oktoberfest is just as much a concert as it is anything else. Yonder Mountain String Band will headline, and there will be more food and fun than you’ll know what to do with. There will also be beer, lots of beer. So pace yourself, and start with Left Hand’s Oktoberfest Märzen Lager: It’s clear honey-gold in the glass with a wispy head, a clean tight nose and robust flavors of caramel and biscuit. It’s not too sweet and goes great with a brat.

Seedstock Oktoberfest (Seedstock Brewery, 3610 W. Colfax Ave., Denver) Sat., Sept. 28, 11 a.m.-11 p.m. If you’ve never been to Seedstock, or sampled their wares, then, reader, correct that. Seedstock specializes in old-world recipes — their Düsseldorf Alt is a thing of beauty — and they’ll be celebrating in an old-world fashion. The music will be polka, the food will be German, and the activities will include stein hosting, hammer tossing and hammerschlagen (nail pounding). Dress in lederhosen or a dirndl, and the first pint is on them.