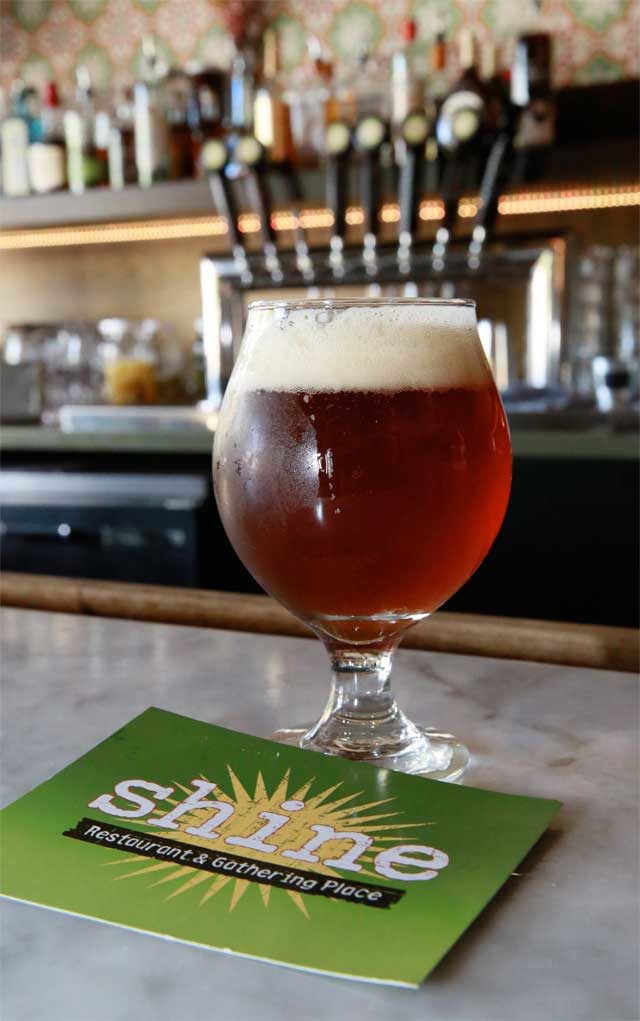 Science is a beautiful thing. It has taken us to the moon and back, found cures for all sorts of diseases and connected every corner of the globe with the internet. And if all of that isn’t enough, science has proven, once and for all, that beer was better for you than water — at least after a workout.

This historic — and, frankly, heroic — finding comes courtesy a 2007 study at Granada University in Spain where professor Manuel Garzon determined that the sodium, sugar and suds present in a pint of beer were “slightly better” than water when it came to rehydrating after exercise.

“Slightly better” is good enough for me, and I think it’s high time to nominate Garzon for a Nobel of some kind. But while we wait for that nomination process to kick in, let’s head down to Shine Restaurant and Gathering Place, just the sort of place to go and rehydrate after a yoga class.

Shine is one of only a handful of craft breweries owned and operated by women, the Emich sisters — Jill, Jennifer and Jessica, known collectively as “The Blissful Sisters.” And that blissful nature plays a major role in their beer, their food and their restaurant. The Emich sister’s modus operandi is both holistic and health-centered and, brew master Mike Kasian keeps the theme going on the beverage side. I decided to follow suit and started with a pint of the Ahmisa Gluten Free Ale (5.8% ABV). Ahimsa — pronounced AH-imsa, my server corrected me after I mistakenly asked for an ah-ME-sa; how self-centered we millennials are — is a sorghum-based beer that looks remarkably like American amber but has the syrupy sweetness of an old-fashioned cola. This comes from the honey and black strap molasses Kasian uses. According to the tasting notes, Kasian also steeps chicory and lemon balm for added contribution and the result is an excellent breakfast beer, one that pairs nicely with Shine’s pancakes, scrambles, granola or doughnut eyes.

Moving in a completely different direction, the Trilogy Imperial Red (9%) offers a load of hops, caramel and toffee. Much like the Ahimsa, Trilogy has a concoction vibe to it, one that fits nicely alongside Shine’s various potions — “house brewed herbal intentional beverages” — and elixirs.

There are also the Pale Ale (5.4%), the Seva Imperial Stout (8.7%), the Down Dog IPA (6.5%) and the Pohoda Pilz (5.2%) — a delightfully crisp and easy drinking pilsner — to help you recover from a sweaty session of Bikram yoga. But at Shine, the brewery isn’t the main thing on the plate. This is a gathering place; a quiet one where customers sit out on the sidewalk, basking in Boulder’s sunshine, or indoors where soft New Age music soothes the savage beast and beer replenishes the muscles. On a nice day, the garage doors roll open and the fresh air comes to mingle with polite conversation. It’s a friendly place, the sort of one that people like to call their own.