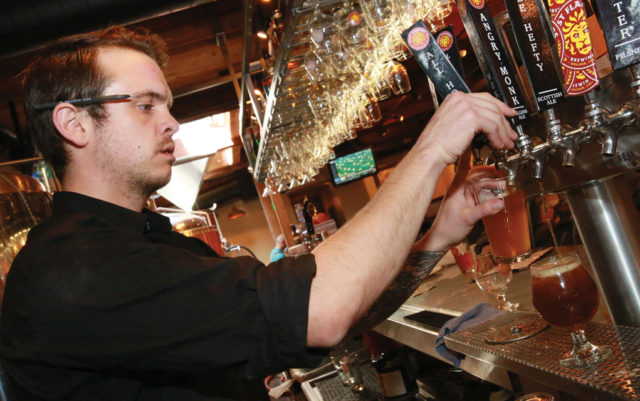 When it comes to beer, nobody does it like Belgium. The small country — just 11 million people covering 12,000 square miles — is home to 180 breweries, and I’m sure each and every one of them is not only delicious, but steeped in history. Bruges, the capital of Belgium’s westernmost providence, West Flanders, dates back to the mid-800s with a plethora of breweries popping up in the 1500s. If you love beer, you better go there.

But Bruges is a commanding 4,804-mile journey from Boulder, not exactly daytrip material. Lucky for you, Belgian-inspired brews dot the landscape. Though the Pearl Street Mall is a far cry from the medieval town of Bruges, the West Flanders Brewing Company is a cozy sit with plenty of suds to quaff. So enjoy that crisp mountain air, drop a dollar in the hat of the man playing his didgeridoo and imagine endlessly fragrant fields of red and yellow tulips as you enter West Flanders. No one claimed that living in Boulder was boring.

Though Boulder continues to change and evolve on a daily basis, the trio behind West Flanders put down their brewing roots more than 20 years ago, and their longevity is nothing short of impressive. This can be attributed to brewmaster Brian Lutz’s ultimate aim: combine Belgian tradition with Boulder attitude. The results speak for themselves. With workhorses like the hoppy American IPA, Third Kingdom (6.7% ABV), the roast Black Immaculate IPA (9.2%) and the big and bold Belgian ale Angry Monk (6.8%), West Flanders has established its lion-dotted taps and cans around town.

A trip to West Flanders reveals a wide array of seasonal and specialty beers for those taking in a football/baseball/basketball game or just engaging in good old diatribe. The All Hours session lager (4.9%) is light and perfect for a bout of day drinking, while the imperial Mr. Chain Blue Lightning (8.25%) is an aggressive lad with one hell of a wallop. Mr. Chain is West Flanders’ first Imperial IPA and it is not to be taken lightly. Nor is the Daisy Cutter, a dark Belgian-style strong ale that will cut you down at the knees if you’re not paying attention. Too much punch? Give the delectably light and sweet Snowy Wit (5.1%) or the quaffable Czech-inspired Hoffmeister Pilsner (5.0%) a try. Just make sure to leave room for dessert, the Recreational Smoke Porter (7.3%), an outstanding full-bodied beer loaded with smoke that delivers a heck of a lot of snap, leather and mahogany on the back.

No trip to West Flanders is the same –— their rotating beers change frequently — but do not despair, they will can anything they have in beastly sized quarts for home quaffing or climbing those Flatirons. From up there, you won’t see the walled city of Bruges, but you will see the eclectic and sometimes off-kilter land of Boulder County. Where else would you want to be?