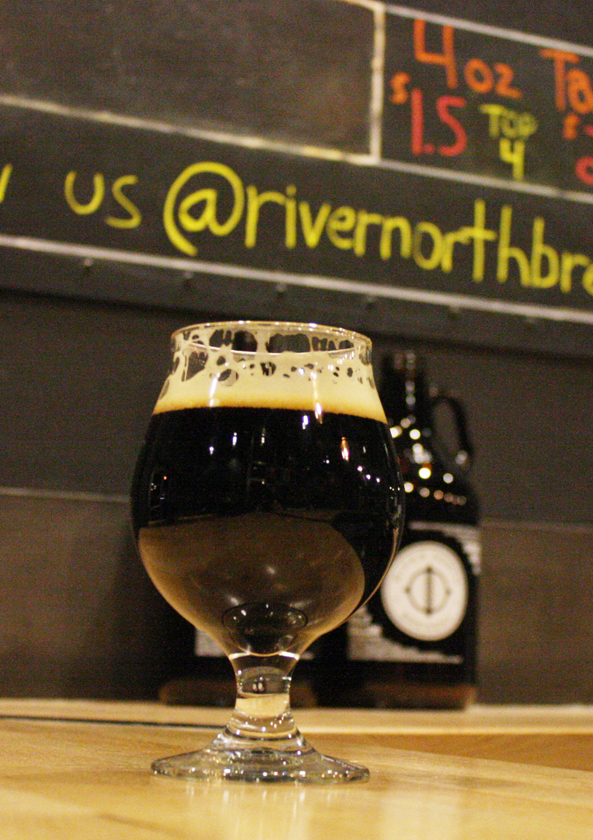 If Nikki Minette is competitive, she certainly doesn’t show it.

A taproom bartender at Denver’s River North Brewery, Nikki is also a writer for Denver Off the Wagon website, which means when she spots my notebook and camera at River North’s bar a couple blocks from Coors Field, I imagine she felt the surge of “That guy’s probably terrible!” that all journalists feel about other journalists.

It might be just me. Nikki’s reaction is pretty different. I’m already partway through River North’s Avarice Imperial Stout — coffee-scented but not coffee-flavored, thick, malty and alcoholic — but Nikki offers to tap one of the last kegs of the whiskey-barrel-aged Quandary, River North’s quadrupel, before returning to conversation with the other patrons at the bar.

Which brings me to one of my theories about the craft beer industry. Over the course of several trips — I already knew Patrick Annesty, now River North’s vice president, so I started going right when River North opened in January 2012 — I’ve developed a theory about the taproom. My little theory applies to a lot more than just River North, of course, including probably two dozen or more breweries in Boulder County.

It’s this: In the right situation and neighborhood, microbreweries are a lot more than just businesses; they can become the cornerstone of a community.

That’s more or less the concept of this whole column, but it bears exploring a little bit. It’s a pretty lofty claim, but River North is a great example. It’s a gathering place for Rockies fans before and after games, rather than just drinking Blue Moon at Coors and heading home. But it also draws in curious beer drinkers, and it’s compiled its share of regulars as well.

I like to think of it in terms of the physical space, the brick and mortar. What used to be in the Blake Street warehouse where River North brews and serves? It was almost certainly empty, and before that it might have held mail or cars or staplers. Now? It hosts a community.

The same is true for Wild Woods, Crystal Springs, J Wells, Asher, Upslope One and Two and many more. Odd13 used to be a house/plumbing business combination. No matter how good that plumber was, something tells me there’s a much greater sense of community over a pint than over a copper elbow fitting.

It’s beyond “friendly.” Employees at every service business are supposed to be “friendly.” It’s an attitude among not just employees but patrons too, sharing an experience rather than just buying and consuming.

On a Monday evening, the River North taproom bears it out perfectly. Within five minutes, I’m chatting with the man next to me at the bar, learning where in Boulder County he used to live (Erie) and whether he remembered seeing the Boulder Weekly around (no). Five minutes later, the father and son team is recommending other breweries in Denver to check out. And all of this before Nikki comes by to talk shop — beer shop, not journalism shop — about the barrel-aged Quandary.

The Whiskey Quandary has already been erased from the chalkboards around River North’s small taproom, but there are a few kegs left and it’s available in bottles. Clean and dry with no massive liquor aftertaste, the whiskey quadrupel is mellow and approachable. It’s also a little bit dangerous, clocking in around 11 percent ABV.

Which means it’s time to call it a night. Outside, Blake Street is pretty deserted, because even though it might be one of the last warm-ish nights of the year, it’s still a Monday. That’s OK. There’s enough of a community inside.