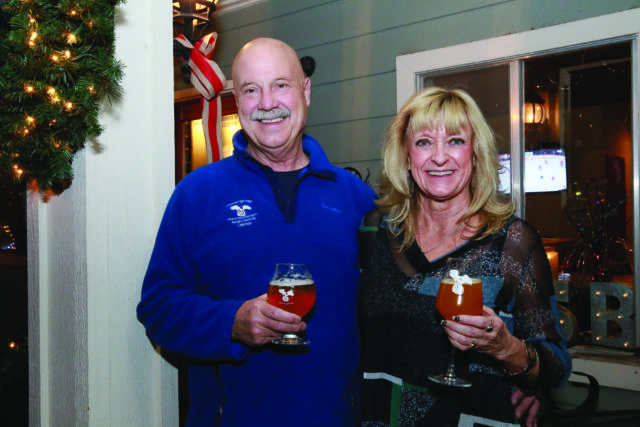 “We were fortunate,” Tom Horst says in an email. Horst and his wife Kristy own Crystal Springs Brewing in Louisville, and though a few Crystal Springs employees had to evacuate their homes when the Marshall Fire broke out on Dec. 30, 2021, no one was injured or suffered substantial losses. As Horst says, they were the fortunate ones.

Just a few blocks north on Main Street, 12Degree Brewing wrote on its Instagram account that the staff was safe and “grateful to still be standing,” but the fires had knocked out the power, and plunging temperatures froze a sprinkler system pipe. The pipe burst, “resulting in a massive flood in our lower level.”

It took a few days to get everything cleaned up and ensure that the drinking water was safe, but 12Degree and the rest of the Louisville brewing contingent—Crystal Springs, Gravity Brewing, Mother Tucker Brewery, and Redgarden Restaurant and Brewery—are open for business, and, more importantly, as places to recuperate.

“We’re trying to be a ‘third place’ for people,” Horst’s email continues. “Where people can go that feels familiar, where they know the staff cares about them.”

Breweries as business, breweries as community—it’s part and parcel to the entire craft beer movement and one of the many factors helping Coloradans decide to live where they do. And when it comes to third places, Louisville has some of the best in the state.

Though it took some time to get things going: The first to open was Majestic Brewing in 1999. Remember them? Not many do. According to an interview in The New Brewer, Majestic’s game plan was to design a brew specific to female beer drinkers, a cream ale, but the concept didn’t last. By 2002, the company was dissolved.

Rock Bottom Restaurant & Brewery was next, but only as a production facility. Then, in the summer of 2012, Gravity Brewing opened up.

Gravity is housed in the Walter Rhoades Post 111 American Legion, in the Legion’s former ballroom, to be specific, at 1150 Pine Street. The Legion is still there—they share a bathroom and the kitchen, Gastronauts, with Gravity. If you’ve never been, you should. Gastronaut’s pizza is outstanding, and Gravity’s Acceleration Double IPA is a thing of beauty, as is the Tsar Bomba Russian Imperial Stout. They have smaller beers, too, if you’re into that sort of thing.

12Degree opened about a year later at 820 Main Street with a lineup of Belgian-inspired brews and eats—Midnight Fog is a quadruple that’ll open your mind to the possibilities of Flemish ales. But you really ought to try Pining For the Fjords, a light and fruity Monty Python named ale brewed with creamy, funky Kviek yeast. They also have pizza but don’t skip the frites: crispy and oily shells hiding delicious pops of pillowy potatoes.

Next to join the scene: Crystal Springs, which was founded in 2010 in Horst’s garage up Sunshine Canyon. That’s where Horst perfected his Summertime Kölsch, the beer that Pizzeria Locale turned into a hit.

The demand for Summertime put Crystal Springs over the top, and Horst moved Crystal Springs’ production to 657 S. Taylor Street, which has expanded substantially in the past several years. In 2017, Crystal Springs opened up the taproom at the northeast corner of Main and Elm in downtown Louisville, and it’s a charming place to quaff a pint or three. Summertime Kölsch is still a favorite, but if South Ridge Amber is on tap, do not hesitate.

Next came Redgarden in 2018 at 1700 Dogwood Street and Mother Tucker in 2019 at 1134 W. Dillon Road. Come hungry to Redgarden, but save room for Anti-Social Amber Lager (warm, biscuity, and delicious). As for Mother Tucker, you can’t go wrong with Hefeweizen. It’s not on all the time, but when it is, it’s the beer you want.

The fires that tore through Louisville may be gone, but the horror wreaked is far from. Keep checking your favorite third place for updates. Many are offering free water for those still without, beer and food for first responders, and help for those who lost everything.

“In the next couple weeks, in partnership with CanSource, we will be releasing a beer with 100 percent of the proceeds from sales going to those impacted by the fires,” Horst writes. You’ve given them so much; now they want to give back.

“Since we’ve been open, through meeting people at our taproom and via my membership on the boards of directors for the Louisville Downtown Business Association and Chamber of Commerce, I’ve gotten to know a lot of people in Louisville and the surrounding communities,” Horst concludes. “They are wonderful, caring, and resilient people. My heart goes out to them. We will recover from this.”

Michael J. Casey is the author of Boulder County Beer, a refreshing history of how a collection of young entrepreneurs turned the cities of Louisville, Lafayette, and beyond into ground zero for craft beer in the Centennial State.