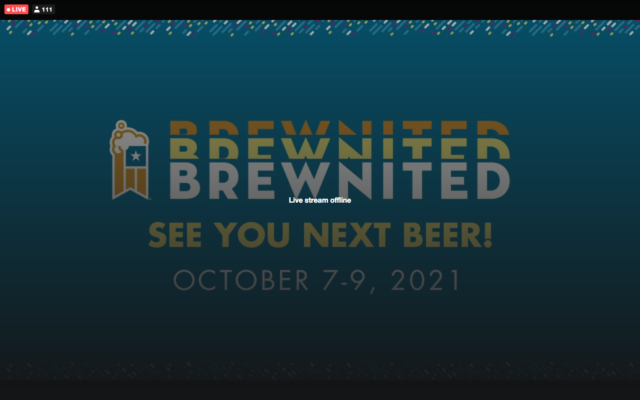 So went the refrain once the Brewers Association announced that their crown jewel, the annual Great American Beer Festival, was moving from a three-day, four-session, in-person soiree to two nights of virtual events and a livestreamed award ceremony. The Brewing Network (a multi-media broadcasting website) would host. There would be a live DJ, brewer talks, seminars on glassware, cooking demonstrations and beer tastings. On the plus side, you could participate from anywhere and tickets were significantly cheaper. On the downside, beer was not included.

And so it went with any festival scheduled in the time of the pandemic. But while a virtual film/book/music festival can at least capture the essence of why people would gather for such an event, this year’s virtual GABF proved that Zoom has its limits.

There was one component, however, that remained the same: awards. 2020 was the 34th time brewers were awarded gold, silver and bronze medals in specific categories. And this year, the BA welcomed 8,806 beers from 1,720 breweries — a sizeable number and, considering that the judging process had many COVID-era restrictions in place, not an easy feat.

From those 8,000-plus entries, 115 beer judges narrowed it down to 272 award winners from 240 breweries in 91 categories. (See below for Colorado results).

The announcement of the winners on Friday, Oct. 16, kicked off the festival proper and was followed by five segments (another five segments broadcasted on Saturday, Oct. 17) that ranged from 10 to 30 minutes each.  Connections weren’t great, and multiple participants led to more than one person trying to talk over each other. Toss in one too many proclamations of “how much we miss seeing you all in Denver,” and GABF felt more like a happy hour Zoom call with your parents than a beer fest.

It’s been a tough year for brewers, tougher, maybe, for the BA. The loss of revenue from events like GABF, the Craft Brewer Conference and Savor forced staff layoffs.

But the BA only represents the direction brewers take; it does not dictate them. And right now, that seems to be a holding pattern. Sales at the breweries are down, but to-go and package sales are up. Margins are thinner there, but with some assistance from the Paycheck Protect Program, ease on evictions and plenty of goodwill from the beer community, the doomsday closures predicted this spring have largely been sidestepped — at least for now. There’s a general, if unquantifiable, assumption among brewers and drinkers that the chickens will come home to roost, probably in early 2021. To borrow a line from one presidential candidate, “We’re about to go into a dark winter.”

At least the BA gave it a shot. While they haven’t released an official number of participants of this year’s virtual fest, the viewer counter in the corner of each broadcast indicated that only a few hundred were watching — as opposed to the tens of thousands who have attended GABF in years past. There are some things a high-speed internet connection can’t replace; it appears that a beer fest is one of them. A pity — beer without community is just a beverage.

Zero in on Boulder County and the number drops to four: Wibby Brewing in Longmont took home gold for its Volksbier Vienna in the American Amber Lager category; The Post Brewing Co. in Lafayette claimed bronze for Dry Stout in the Stout category; Sanitas Brewing Co. in Boulder nabbed silver for Déluge in the Mixed-Culture Brett Beer category; and Avery Brewing Co. won gold for Liliko‘i Kepolo in the Fruit Wheat Beer category. Look for reviews of all four in future editions of Boulder Weekly.