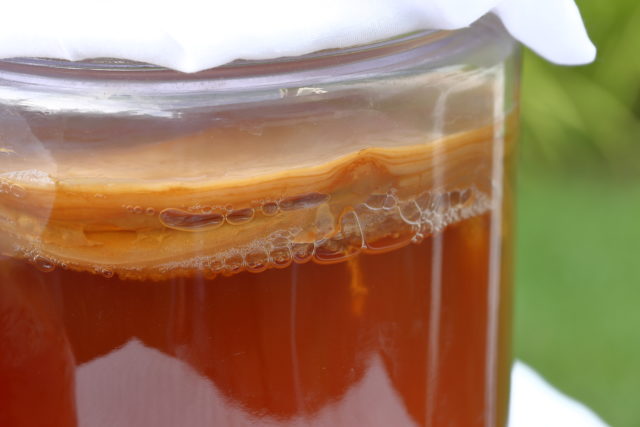 Imagine being able to brew up a magical elixir that can cure a hangover, reverse hair loss and help promote a healthy gut? Well, imagine no more.

While no true scientific studies support kombucha’s health benefits, it has been touted as a healthy beverage for thousands of years. Besides, science has proven that fermented foods contain healthy probiotics (good bacteria) that can aid in digestion and promote a more balanced gut microbiome.

Kombucha is the result of fermenting sweetened black or green tea with a gelatinous blob known as a “SCOBY” (symbiotic culture of bacteria and yeast). At first glance, SCOBY looks like the top of a slimy mushroom (it’s not) and appears gummy or rubber-like. The SCOBY is what houses the yeast cultures and bacteria that turn the sugars in the sweet tea into kombucha.

Many studies have shown drinking tea can boost your immune system, reduce inflammation and have a positive long-term impact on wellness. It is also believed that the healthy properties of tea translate to kombucha. Ask any avid kombucha drinker, and they’ll likely disclose they consume it for its health properties.

While I do enjoy drinking store-bought kombucha, I don’t enjoy the high price tag (partly because kombucha is marketed as a healthy elixir) — with a price point in the $3-$4 range, daily consumption can get costly.

Like anything else, making your own kombucha at home is a great way to save money and make exactly what you need — you can literally make six 16-ounce bottles of kombucha for less than the price of one store-bought bottle.

Brewing your own kombucha is similar to brewing beer in that yeast and sugar are used to create fermentation. The result is an effervescent, tart and tangy carbonated drink with a trace amount of alcohol — less than 1% to be exact. Making kombucha is as simple as brewing tea. So, go ahead and make your own.

Boil water and dissolve sugar, add tea and steep for 15 minutes. Once cooled to room temperature, transfer sweetened tea to the glass jar. Add SCOBY and kombucha starter. Cover with cloth and use a rubber band to secure in place. Store out of direct sunlight (kitchen counter works) for seven to 10 days.

Next, remove SCOBY and fill bottles, tightly seal caps. Keep bottles at room temperature for two to three days to condition. Finally, place in the fridge to chill. Drink!

From ancient obscurity to American mainstream

The exact origins of kombucha tea are fuzzy, but many researchers believe the drink was first brewed in Manchuria, China. Historians have found evidence of kombucha tea consumption as early as 221 B.C., during the Qin Dynasty. Referred to as the “Tea of Immortality,” Emperor Qin Shi Huang employed alchemists to brew the tea believing it would extend his life.

Historians also believe a Korean doctor by the name of Dr. Kombu brought the medicinal elixir to Japan in 414 B.C. to help cure Emperor Inkyo. Other reports trace kombucha to Russia and Ukraine in the 1800s. Sometime in the mid-20th century, kombucha started to gain widespread popularity throughout Europe and could be found in India.

Kombucha found its way to American drinkers sometime during the mid-1980s amid the HIV/AIDS epidemic. It was believed kombucha could help a compromised immune system and aid in the production of T-cells, which help control and shape immune response. Around this time, independent kombucha producers gained a presence in the domestic health food market.

Although not the first brand to offer a commercially packaged kombucha, GTS Living Foods (originally named GT Kombucha) is credited with championing the category in the U.S. What started as a bedroom hobby in the ’90s, is now a booming business with a net worth of $900 million. Some economists believe the kombucha category will top $7 billion in annual revenue by 2027.