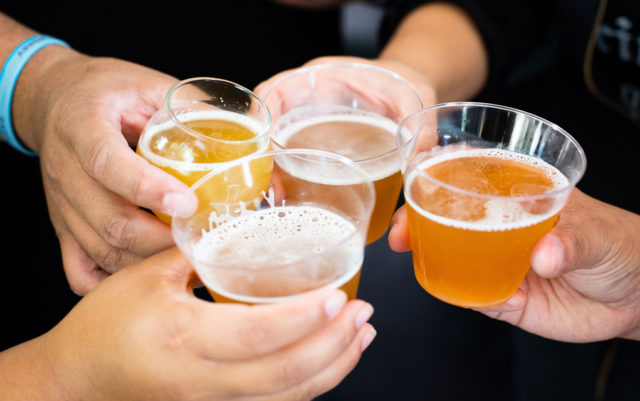 You’ve been sheltering in place, locked down from the rest of the world, and your thumbs are sore from scrolling through endless Facebook rants. Cabin fever is starting to set in. What to do? You could do what millions of Americans have been doing for decades: Make beer at home. What better time than now to pick up a new hobby?

Homebrewing can be as simple as dissolving extract into a pot of boiling water on your stovetop and pitching yeast. Or you can easily go down the rabbit hole of brewing equipment and assemble a pro-grade nano brewery in your garage that’ll have your neighbor secretly questioning if you’re a real-life Breaking Bad Walter White. Sky’s the limit, really — if you have the space — and you’ll be turning water into delicious suds in no time, using puns for beer names like “Locked Down Lager” or “Pandemic Pale.” Fun, gratifying and legal.

I’ve been homebrewing for six years, and find it to be both stimulating and therapeutic. When I’m homebrewing alone in my garage, I zone out, and it becomes this relaxing “me time.” As a member of a local homebrew club, I’ve got a network of support at my disposal — not just a group to ask brewing questions and get feedback on why my mango-guava Belgian saison missed the mark, but actual friends who genuinely care about my well-being and want to know what I’m up to in life. There’s something about the hobby of homebrewing that goes beyond just making beer.

The homebrewing community is filled with some of the most generous and kind people I’ve ever met. There’s a special camaraderie between brewers. When a fellow brewer landed in the hospital with COVID-19, I texted him to ask how he was holding up. He replied: “This has been the hardest thing I’ve ever had to go through. The only thing keeping me positive is the love and support from my family at home and my beer family. You all are amazing. It may not seem like it, but this club has been super helpful with keeping me in good spirits. I never thought a homebrew club would have such an effect on my life.”

In the age of social media, human connections seem like a fleeting idea. We live in a façade of interaction when a follow on Instagram has become the equivalent of waving hello at a passing neighbor. There’s something to be said about actually seeing people in real life. Sharing a moment and visually seeing someone’s facial expressions in conversation is priceless. That’s why grabbing a round of beers with friends never gets old. So, do yourself a favor and get a starter kit from your local homebrew supply, brew a batch of beer and, when it’s safe to go back out with the crowds, join a homebrew club.

Homebrewing is as American as apple pie and baseball. Some historians believe pilgrims on The Mayflower landed on Cape Cod not as an intended destination, but as a result of being low on beer. In the early days of colonialism, clean water was hard to come by. Beer was a healthy alternative for hydration as it contained necessary nutrients. An easy remedy was to brew your own.

Production of alcohol at home was outlawed by the federal government in 1919 as a result of the impending era of Prohibition. Although America went dry for 13 years, homebrewing exploded. When Prohibition was repealed in 1933 by President Franklin D. Roosevelt, homebrewing was not included in the ratification of the 21st amendment. Americans were again allowed to legally produce, sell and consume commercial beer, but homebrewing for private consumption was still illegal. It wasn’t until 1978 when President Jimmy Carter signed H.R. 1337, that homebrewing was again legal at the federal level. In 2011, President Barack Obama became the first known sitting president to homebrew beer inside the White House. With help from then-White House Chef Sam Kass, three recipes were developed using honey from a beehive on the White House’s South Lawn. The White House Honey Brown, White House Honey Blonde and White House Honey Porter recipes have all been made available online. Need something to do? Be presidential and make some homebrew.