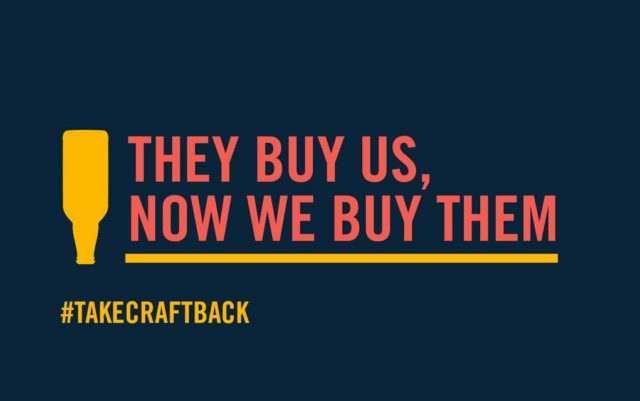 When Boulder Weekly spoke with Eric Wallace, vice chairman of the Brewers Association (BA) board of directors, about the Boulder-based trade group’s push for transparency in the beer marketplace with the “Certified Independent Craft” seal, he assured us that the seal was just the first step in a long and drawn-out campaign against Big Beer. On Oct. 16, the BA unveiled the next step: Take Craft Back, a tongue-in-cheek crowdfunding campaign to raise $213 billion and buy the granddad of them all, Anheuser-Busch InBev (ABI).

Granted, the BA doesn’t actually think they can raise the money to buy one of the largest companies on the planet — as of Nov. 29, Take Craft Back has raised $2,756,410 in pledges, roughly 0.001408507 percent of the target goal — but the campaign has garnered a fair amount of attention, specifically the humorous video announcing the campaign, which generated more than 36,000 views.

In an age where every PR campaign revolves around starting the conversation, Take Craft Back certainly has people talking. For more information, visit   takecraftback.com.

A Pearl Street state of mind

What’s next for local craft brewers lies not in packaging and distribution, but in brewpubs. And when Boulder Beer took over the Walnut Brewery in downtown Boulder this summer, a trend was certain to develop.

Oskar Blues followed suit, opening its Boulder outpost at 912 Pearl St., the former location of the blink-and-you’ll-miss-it World of Beer. In addition to a full menu of pub fare and the usual OB brews, Oskar Blues Boulder features beer from Florida’s Cigar City Brewing, Michigan’s Perrin Brewing, Utah’s Wasatch Brewery and Squatters Craft Beer — all of which, including Oskar Blues, are owned by the private equity firm, Fireman Capital Partners.

Pub fare not your cup of tea? The Post Brewing Company has taken over the Shine Restaurant & Gathering Place location at 2027 13th St. for all your fried chicken and beer needs.

Currently, The Post Boulder is only open for happy hour, dinner, and brunch on the weekends, but with plenty of weekly specials — 2-for-1 Tuesdays and fish fry Fridays — The Post will quickly become a go-to place for downtown holiday shoppers.

Bringing it full circle, more good news from the BA: its new trust agreement with the U.S. Department of Agriculture-Agricultural Research Service to fund a hop breeding program in hopes of developing disease resistant hop cultivars in the public domain.

While this partnership is significant for a variety of reasons, the words “public domain” are key as these hops will be available to all brewers. This announcement comes on the heels of ABI’s acquisition of rival SABMiller — SAB stands for South African Breweries — and their total ownership of 2017 hops, effectively denying any other U.S. brewery access to the hops.

According to the BA, public hop breeding benefits both the hop and brewing industries and helps “produce a truly local pint.” Cheers to that.