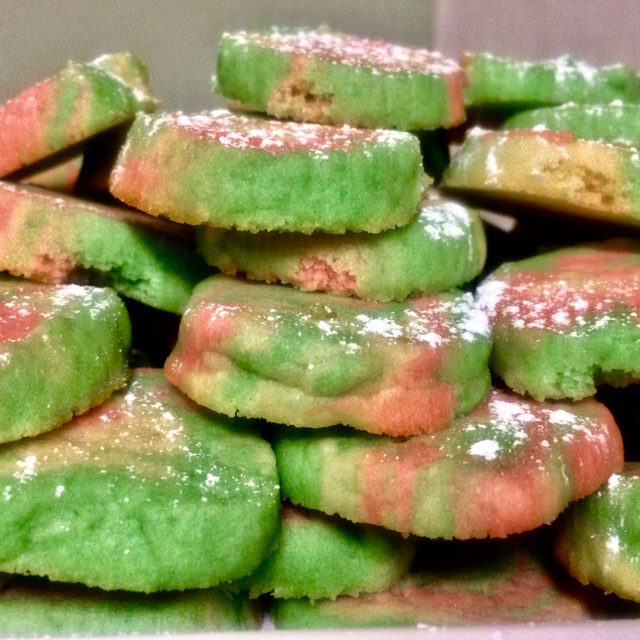 Growing up, there was no greater treat in our family than a rainbow cookie from my Uncle Dom’s bakery. It was a half-dollar-sized sugar cookie in red, white and green tie-dye coloring, with soft edges and a hint of lemon and vanilla. Once I had a kid of my own, I thought he’d appreciate the cookie as much as I had.

Problem: I suck at baking.

If I wanted my son to taste the cookie as I had tasted it, I’d have to reconcile at least one of those issues. He wasn’t going to get the whole experience of my uncle coming out from the kitchen in sweatpants and a white v-neck and handing a white paper bag of four or five cookies over the counter with a remark in scratchy Italian-American English of how tall we all were getting, sure. But I could wear a white shirt and sweats. I could tell my kid he’s getting big.

Realizing I was in over my head, I thought it wise to contact members of the extended family to see if any of them had the recipe. However, half the family is blacklisted by the other half due to past indiscretions that range from snubbed parts in impromptu holiday plays to poor seat placements at wedding receptions to stolen baby names — episodes which were mostly misunderstandings but underscored deeper issues and so compounded and grew into very real and very ugly schisms and accusations of betrayal and many irreparably hurt feelings.

Of course, as a kid I didn’t know everything that went on, but these battles became mythologized over time, and it’s clear now that both sides revised history and attached motives to bolster their own fortress walls. Whatever was the final straw, and I don’t have a clue what it was or if there ever was one, I’m glad it happened before Trump.

So, yeah, I started with the family members with which we’re still on speaking terms. One aunt said, “No, but give it to me when you have it.” My cousin had worked in a bakery, but he didn’t know it. I was told another relative had the whole recipe book from the bakery, but that he sold it for drugs. Now, I didn’t take a super semester at the Rutgers University School of Communication, Information and Library Sciences just to be so naive as to believe there was only one copy of the recipe and that it was on paper and that he gave it away without making a duplicate, or that this was a Lifetime Movie Network movie wherein cookie recipes go for hundreds of dollars on the street. Alas, he didn’t have it either after all, but there’s no way he sold it; there’s that family folklore again.

Now my great aunt, my Uncle Dom’s wife, of course had the recipe and said she would be happy to send it, but it’s been a year and still no recipe despite multiple requests. She did send a tin of other cookies last Christmas, but no recipe, which is like getting a fish when you asked for fishing lessons.

As for Uncle Dom’s kids and grandkids, who would have had the best shot of being bequeathed the recipe, the last and only time I saw all of them was at a family reunion in Mystic when I was 8 and we all got a parasite from the water.

Discouraged but undeterred (and long cured of the parasite), I tried to bake again. Over the course of several months and three dozen or so batches, I made cookie soup, cookie brittle, cookie pancakes, cookie rocks, cookie bread and, finally, something that could objectively be identified as a cookie. I learned to cream butter and sugar. And to do that first. Basic shit. I learned how egg affects consistency. I learned how different baking sheets affect coloring. I learned how sugars and fats transform in the oven.

And yet, I wasn’t close to reproducing Uncle Dom’s rainbow cookies. I began to think I couldn’t replicate something as sentimental as a cookie I ate when I was a child; that the exercise was doomed from the start. I thought my son really wouldn’t be able to taste the cookie as I had tasted it.

But, I was wrong.

See, I was telling my dad about my failed attempts and he said he remembered the bakery used a lot of Crisco. (Like, a lot of it.) That was news, but so was the fact that my dad worked in the bakery. “I didn’t really,” he said. He worked in it when it was his dad’s. But I hadn’t realized my grandfather, who passed away when my dad was 10, owned the bakery. Or, that he taught Uncle Dom how to bake, and gave him all the recipes. Or, that there were 25 other bakeries from Bridgeport to Rhode Island that my grand-relatives and great-grand-relatives owned and used as the proof of employment required to sponsor their kin to emigrate from Southern Italy.

I didn’t know how deeply baking was ingrained into my family’s story. My mom once, unprompted, told me, “Baking is a tough life, you don’t want to get into it.” I had never once mentioned baking as a career path so I didn’t know why she said it. But it made sense after talking to my dad. I learned that years of lifting hundred-pound bags of flour in the bakery bulged a disc in my grandfather’s back and put him on an operating table. And that the anesthesia he was given caused a reaction that killed him. And that my family — siblings, aunts, uncles, cousins and all — shares not only a common allergy to that anesthesia, but also the burden of coping with his absence.

I didn’t know any of that before I named my son after him. I just knew my dad looked like him, and that I looked like my dad, and that my son might look like me.

Come to think of it, the final straw for our family may have been when my grandmother eventually passed away. You can’t underestimate what a woman who raised six young children on her own means to a family, even decades later. You take the egg out of the dough, and with nothing to bind it, it never quite comes together.

Alas, I was no closer to getting the cookie right. Crisco, as is so often the case with hydrogenated oils, didn’t solve all my problems.

I tried a few variations over the following months, sometimes getting close, but never too close. Then I saw on Facebook that an aunt I’m “friends” with liked the photo of a cousin with whom I’m friendly, who was making cookies at another aunt’s house, who may or may not be on the blacklist. The photo was of a table full of red, white and green rainbow cookies.

I knew the table; we used to spend Thanksgivings there. And I liked that aunt and uncle, a lot actually. They brought me to basketball camp and put Gold Bond powder in my sneakers and gave me a book signed by Carl Yastrzemski. But, because of the times, I didn’t know if I was going to stir shit in the family pot by asking for the recipe.

Of course I did; ask for the recipe, that is. And my aunt gave it to me. Margarine and butter, not Crisco. But a lot of it. Mix the other ingredients, and then knead the flour into it, like my grandfather did in batches 10 times as large, until your hands start to hurt. Cut the dough in three, add color to two and swirl to create one log. Roll, chill, then bake.

But stir the pot? No. In fact, my aunt told me she was glad to hear from me. She said everyone’s healthy, and her youngest, my cousin, was on leave from the military for just a few days. She said if I ever stumble upon Uncle Dom’s chocolate chip cookie recipe, I should pass it on to her. And she asked to see a picture of my son when I had the chance to send one.

I baked the recipe. It was them alright. I put them in a box, and when my son woke up the next morning, I gave him a cookie. He bit in, and grinned, and I took a photo and sent it to my aunt.