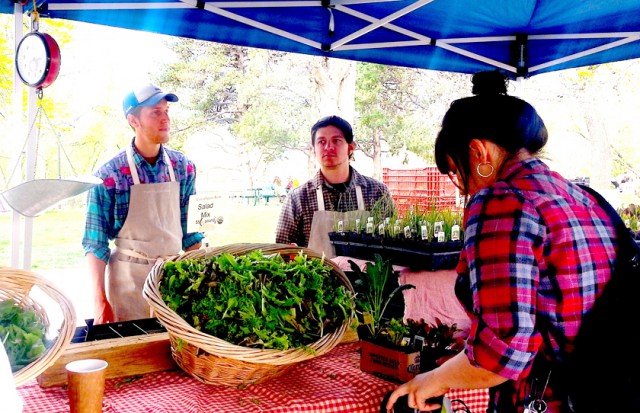 President John F. Kennedy once quipped that the farmer is “the only person in our economy who buys everything at retail, sells everything at wholesale and pays the freight both ways.” As long-term droughts continue to dry out the fertile valleys and plains of California, Oklahoma and Texas, and many parts of the country recover from unprecedented frosts, food prices across the country are anticipated to rise. As the cost of production increases on farms across America, farmers are feeling the squeeze as grocery shoppers, already grumbling, are finding that their dollars don’t go as far at the check out line. Strolling through the farmers’ markets in many parts of Colorado, however, consumers are experiencing less of a sticker shock as the price of many locally produced goods are holding steady. While large scale, conventional agricultural products are becoming more expensive, the price of locally grown, organic produce seems to be rising less steeply. Many local growers and organic farmers are finding ways to economize and diversify to adapt to rising feed prices and the cost of pro- duction without passing these expenses on to customers.
“The supermarkets, ultimately, dictate price,” explains Paul Cure of Cure Organic Farms, “based on what they think the Connect consumers will pay.”
On their farm in eastern Boulder County, the Cures grow a wide range of fruits, vegetables, poultry, meat and wool. By selling directly to consumers through farmers’ markets and a CSA, they are able to shift production to meet client demand without having to grow one large crop for a vendor who might set wholesale prices early in the season. While their prices have remained steady, they have been paying more, recently, for their organic feed costs due to the increased price in grain. This follows a national trend in an increasing consumer price index (CPI) for food at the national level.

Recent data released from the USDA’s Economic Research Service shows the price of beef and eggs up an average of 10 percent from this time last year. The severe droughts across the Midwest in 2012 and prolonged water shortages in California, Texas and Oklahoma over the last several years have areas that supply corn and other grains for animal feed. More concerning, according to the U.S. Drought Monitor for the second week in June, 100 percent of California was experiencing drought, with more than 75 percent of the state experiencing long-term, extreme or exceptional Connect with us drought. In a state where 80 percent of all water goes to agricultural production, California’s fruit and nut trees are dying off, livestock are being sold off and land is lying fallow as aquifers empty and ditches run dry. As our nation’s largest agricultural producer, the data for California is showing an increase of over 21 percent for fresh fruit compared to prices from 2013 and forecasts for 2015 have been grim.

Here in Colorado, an unusually wet year on the Front Range and Western Slope has brought many local growers out of drought conditions, though many are still recovering from September’s flooding. Unfortunately, in the south west part of the state, conditions are still dry, contributing not just to rising costs, but less availability of grains for livestock feed.

Despite increased supply costs and reduced availability, many local farmers in Boulder County have so far been able to keep their retail prices relatively steady. Unlike large-scale producers who may grow only one or two different commodities, small-scale farms under 50 acres (which make up over half of all American farms, according to the USDA’s Agricultural Resource Management Survey) tend to grow a wide range of products. This ability to diversify, to shift crops quickly based on consumer trends or changes in production costs, has allowed many of them to keep costs controlled.

“You have to be resourceful in regards to keeping your costs down,” explains Cure, who will often come back to restaurants to collect items like waxed boxes they deliver produce in to help keep these items out of the landfill and cut down on costs for their 12-acre farm.

“Boxes, twist ties, labels — it all adds up in trying to keep prices low,” he says.

He sees this ability of smaller farms to economize as one more plus in buying local.

In the U.S., the average size of a farm is 420 acres. But hidden in these statistics is the fact that there are an increasing number of family-owned farms that are sprouting up outside urban areas on 50 acres or less thanks to the growing interest in organic, local agriculture. At the same time, however, the number of midsized family-owned farms, 100 to 400 acres, is decreasing.

As the price of products from largescale, conventional farms increases, the extra expense of buying from local, organic growers may begin to seem less of a stretch for many consumers. While climate and grain costs affect all growers, the margin between these products appears to be decreasing.

“Even conventional eggs are costing $5,” explains Cure, who is seeing more and more organic products make their way from local farms to traditional grocery shelves. “If you look at it on a national level, even Safeway and Kroger are starting to source from the same organic growers. Organics are the only growth industry now in food. They look at their shelves and they look at what’s selling.”

While the actual cost of conventional eggs locally ranges from $2.50 to $3.99 at this point, most all national forecasts anticipate an increase in food prices for the coming year (most reliable estimates place it at least between 3 percent to 5 percent). What is less clear is whether local producers and organic growers will benefit from these price points in coming months. Much will depend upon whether local producers are forced to increase their own prices as a result of increases to their cost structure.

“I look at it optimistically. Who’d have thought that in the 1950s when Tang and Spam were high class, that grandma’s radishes and carrots would now be considered en vogue,” jokes Cure. Like many who believe in a certain amount of food sovereignty, he feels that it isn’t price alone that dictates food choices. “So many families are willing to take the extra costs and say, ‘This is what I believe in. I’m willing to pay extra for good, clean, fair food.’”