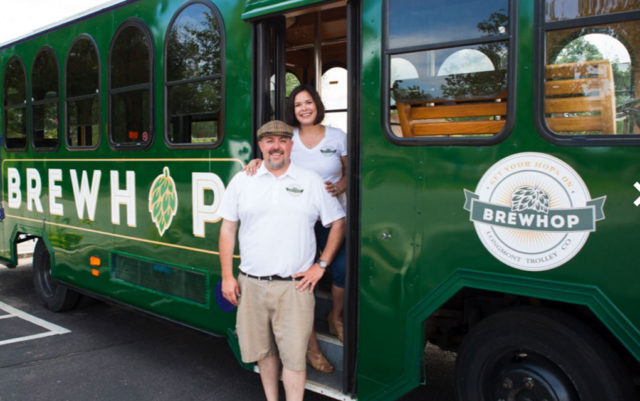 We’ve all been there: It’s Saturday, and all you want to do is get out of the house, head over to your trusty watering hole and catch up with a few friends. But you just read about a brand new beer release, something dry-hopped no doubt, at another brewery across town. And your plus-one also wants to go out, but what they’re thirsting for is a pint of cider, possibly even a cocktail. What is an intrepid drinker to do?

In Longmont, the answer is simple: Brewhop Trolley. Running Saturdays and Sundays, Brewhop shuttles birthday parties, bachelor and bachelorette soirées, and the single drinker from one Longmont brewery/cidery/distillery to the next — 13 in all — safely and soundly. Each stop is no more than a minute or two, just long enough for departures and arrivals, before the Brewhop rolls on to the next watering hole. A full loop takes roughly an hour.

Ready to go? Start at 300 Suns Brewing, where you can procure a lunch pail of samples and decide on which stops are a must and which can be skipped. Though the trolley runs from 12-9 p.m., trying to go the distance is ill-advisable. As you board the Brewhop and settle into the trolley’s wooden benches, remember to pace yourself.

Next up is Wibby Brewing, where lager reigns supreme. Don’t skip its French spring ale, a collaboration with Station 26, M-A-R-S, before rolling on to Pumphouse Brewery/Red Zone, followed by Longs Peak Pub & Brewery. Both offer plenty to quaff but, more importantly, Wibby serves food, which you will need from here on out.

Next up is a double drop: Longtucky Spirits and St. Vrain Cidery. Cocktails and cider tend to get short shrift in a scene densely populated with breweries, but neither should be overlooked. At Longtucky — new to the scene but soon to be a staple — try the Salty Dog: fresh and botanical gin mixed with creamy pink grapefruit juice served in a rocks glass rimmed with kosher salt. At St. Vrain, dive into Dry Ginger (divine) and the Key Lime (a king amongst royalty).

The Brewhop rolls on: Shoes & Brews, where you can pick up some running shoes to help you work off the calories you’re packing on; Grossen Bart Brewery, with every beer named after a facial hairstyle; Bootstrap Brewing, where the Chillax Pineapple Gold is a must; and Longmont’s perennial staple, Left Hand Brewing.

You’ll find more spirits at Anvil Distillery (note, it’s closed Sundays), house blends at Skeye Brewing, a much-needed coffee beer at Oskar Blues Tasty Weasel Tap Room, and a wedding beer (#Caychel, a hoppy wheat) at Open Door Brewing before heading back to 300 Suns. Yes, you can still get a beer, should you need another, but a panini and a glass of water might be preferable.

All the while, the Brewhop Trolley rolls on. Tickets for the trolley are a measly $15 for a one-day pass, $25 for a full weekend: brewhoptrolley.com.