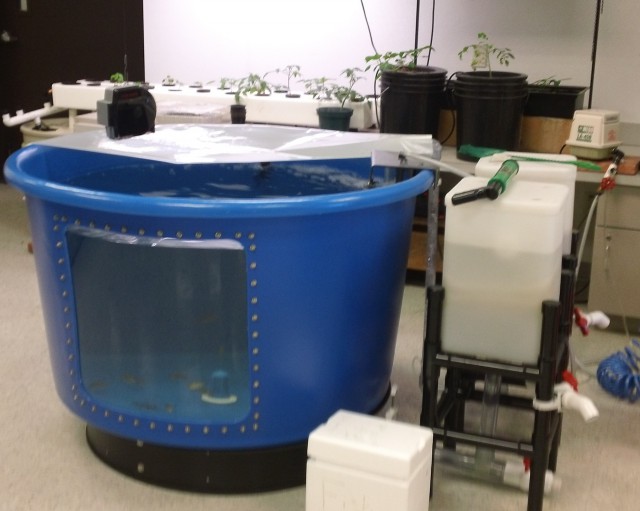 Standing at the fresh seafood counter at the local grocery store, it’s hard not to encounter a dilemma these days. Fresh caught salmon sounds wild and free, until the viral images of Fukushima fallout maps come to mind. Overfishing and satellite images of dead zones in the Atlantic have you reaching for the farmed fish when you consider the environmental impacts of this choice as well. In a time of growing concerns over both food security and food safety, fish has long been on the short list of foods to watch. Rather than taking it completely off the menu, many do-it-yourselfers are finding a new way to avoid the grocery aisle indecision by learning how to raise fish themselves. Along with backyard vegetable gardens and chicken coops, aquaponic and aquaculture systems are finding their way into Boulder County’s food chain, one fish at a time.

Aquaculture, also known as fish farming, is the term given to the breeding, raising and harvesting of fish from all sorts of water environments. With large-scale operations running in both marine and freshwater environments, about half of all seafood currently eaten in the U.S. is farm raised. Rivers, lakes and ponds, as well as open ocean cages have been used in the production of everything from shellfish to catfish. Fish farming has been used to repopulate recreational fishing areas and for research purposes, but most fish raised in commercial aquaculture operations find their way into the food chain. In the past, poor waste management practices have lead to environmental concerns, giving a reputation as a heavy polluter to many open water aquaculture systems, but many see newer technology using recirculating and closed systems that integrate plants and use fish waste as a nutrient source as a possible solution.

“It’s hard not to stand there wondering ‘what the hell should I eat,” reflects Sylvia Bernstein, owner of The Aquaponic Source in Longmont.

A growing lack of trust in commercial agriculture and a desire to connect more wholly with one’s food source has caused a shift in demand for more locally produced food. A longtime pescatarian herself, Bernstein sees the increasing interest in raising backyard fish as part of the movement, and feels it’s only a matter of time before it reaches critical mass.

With a background designing hydroponic systems for home gardeners, Bernstein has spent the last few years bringing the larger recirculating systems used in commercial aquaculture systems down to scale and using the waste the fish produce in grow beds for herbs and vegetables.

“Many hydroponic growers want to use organic nutrients, but that’s tough without the necessary bacteria and microorganisms in a typical system,” she says.

Using fish in the nutrient reservoir was one way to provide a natural source of nutrients while introducing beneficial bacteria that convert the harmful ammonia of fish waste into useful nitrates taken up by plants. This combined fish and plant system is known as aquaponics.

“There’s a certain magic that happens when you bring something like this to scale on a patio or garage,” reflects Bernstein.

A quick scan of the variety of do-it-yourself systems on YouTube is a good indication of how quickly the interest has grown in home-grown fish farming. Basic systems using 25 gallon barrels cut in half for grow beds and a standing one for fish can be put together with less than $50 in materials that can be purchased at a local hardware store. For those less handy with the hand tools there are a wide range of sizes and systems that integrate both fish and plants available online and locally. While the initial investment in a system is one upfront cost, there are some basic principles about water quality and the nitrogen cycle that are necessary to raise fish successfully. Resources for beginners are available online and many school groups have been introducing systems into the classroom. Several classes are being offered for those interested in starting their own systems through Boulder Valley Sschool District’s Lifelong Learning program and through GrowHaus in Denver.

In the U.S., the most commonly farmed commercial fish is catfish, but most home growers start off their aquaculture adventures with tilapia. This freshwater, white-fleshed fish is a hardy one for beginners and they put on weight quickly while tolerating a range of water quality. Most reach frying pan size in 6-8 months and, much like backyard chickens, can have their fish feed supplemented with scraps from the kitchen. Native to the Nile, the temperature range for tilapia needs to stay between 70-90 degrees, so aquarium heaters are needed to grow them in a garage or basement. Outdoor systems will work fine in the summer, but an insulated cover will help keep temperatures constant for cooler nights. Creative backyard homesteaders have come up with a wide variety of hacks, such as converting old hot tubs or bathtubs into aquaponic set-ups.

At the 63rd Street Farm in eastern Boulder, Amanda Scott and her husband have recently broken ground on a 20-by-40-square-foot greenhouse that will house an aquaponic system incorporating grow towers for lettuce and other crops and a large fish tank for year-round production. “A lot of farmers are skeptical —they are waiting to see if it’s cost effective,” admits Scott, who is herself wondering what the return on investment in aquaponics will be. With only six acres, their farm isn’t able to handle the large animals needed to produce the manure for fertilizing their fields. Citing the high nutrient value of fish waste, Scott sees aquaculture as not just a source of protein to add to the eggs, chicken and turkey they already provide their CSA members, but as a fertilizer source for their farm.

Their hope is to have the first fingerlings swimming by springtime.

While many restaurants have embraced the farm-to-table concept, supporting local farms or even managing a farm of their own, the processing involved in fish production and the environmental factors that limit the choice of which fish can be grown in aquaponic systems may prove to be a barrier for restaurants in Colorado. Bernstein says she has seen the popularity of aquaponics growing more quickly among the home gardening crowd. Most of her customers are individuals or homeowners buying systems or supplies for residential or educational use. Scott, who often works with chefs and culinary students out at her farm, sees restaurants as the perfect way to close the loop in the farm-to-table movement with aquaponics.

“I walk in and see all these fancy fish tanks in their restaurants and tell them, why not grow some herbs on top of there!” he says.