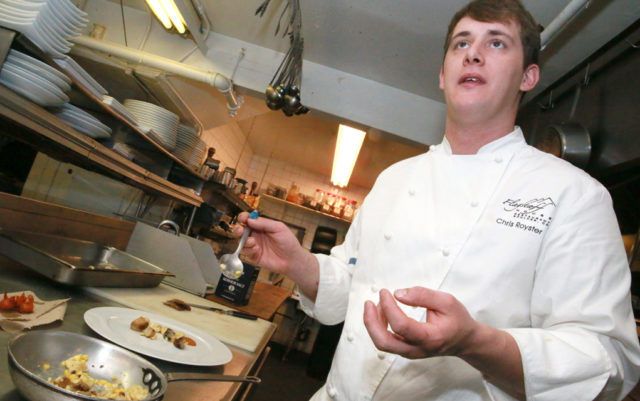 How did Chris Royster go from dropping out of high school at 16 to being the chef de cuisine at Flagstaff House, a Chopped champion and a Zagat 30 under 30 recipient in just about a decade? Hard work, passion and discipline, sure. But also spoons.

“I’m a little crazy about my spoons,” the 27-year-old Royster says. “I have so many different spoons to plate with. It’s kind of like a painter’s palette, where they have all their mixings on there or they’ve got their bundle of brushes and each one does something different — that’s exactly the way I feel about a spoon. [I have] really, really tiny spoon tips. I have wide ones, I have square-facing ones, I’ve got slotted spoons, big spoons, basting spoons, whatever, there’s so many just because it allows me to create different things on the plate based on the spoon.”

Some chefs revere above all else their knives, or their technique, or their ingredients, but the king-making of spoons is unusual. No doubt, Royster values all those other things, and more, but his affinity for the round utensil is but one of the things that makes him unique.

Royster is three years into his tenure at Flagstaff House, where he rose quickly from sous chef to chef de cuisine. It’s typical of how his life in the restaurant industry has gone so far — entering his first kitchen as a dishwasher at age 14, he made executive chef at that restaurant, The Twist, in New York, before he turned 18. 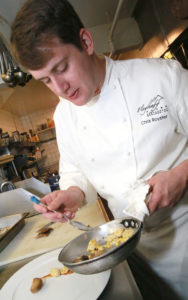 If that amount of progress for a minor seems incredible to you, you’re not alone. When Royster relocated to Boulder, he says restaurateurs thought he had fabricated his experience.

“I feel like a lot of people just shunned me away, like, ‘That’s not true,’” Royster says. “So it was a month of me trying to get a job and I couldn’t even get an interview. So I dumbed my resume down and then I started getting interviews. It was funny.”

Royster finally got a job as a sauté cook at Louisville’s Zucca Italian Ristorante. True to form, Royster was the executive chef at sister restaurant The Huckleberry within three years. All that success made waves in the national food media — it caused Zagat to list Royster on their 2014 30 under 30 “Rock Stars Redefining the Industry” list and appealed to produces at the Food Network when a co-worker nominated Royster for the cooking competition show Chopped, which he won. (On the show, contestants are allowed to bring seven knives; Royster asked if he could bring two knives and five spoons. His request was denied.)

If all that attention has spoiled Royster, he doesn’t show it. If it’s packed expectations onto him, his shoulders don’t appear to bear them. What drives his success, he says, comes from within.

“I think I beat myself up more than anybody has beat me up in my life,” Royster says. “After Chopped, we had so many people say, ‘Oh, we want to meet the Chopped champion,’ but, there’s like 33 or 34 seasons of Chopped now; there’s so many champions, right? … But those people are elated, they’re just already excited to be here. It’s easy to please people who are already happy.”

Royster’s is a casual persona that belies the gravitas with which diners often view Flagstaff House. Pressed linen tablecloths, robustly attentive service, mini-courses between actual courses, an entrée list whose items hover around $50, its location literally looking down on Boulder — all of it effects an air of exclusivity. But that perception is wrong, Royster says, pointing out that prices are comparable to the fine dining establishments on Pearl Street. Those splurges of service — the intermezzo courses, the valet parking, the delicate, spoon-crafted quenelles — that’s just fine dining, and it need not be apologized for, Royster says. The commitment to the details, if anything, is what sets Flagstaff House apart, he says.

“We want to make sure everything is as perfect to our capability,” Royster says. “I drill [into our chefs to] strive for perfection. Nobody’s perfect, we’ll never reach perfection, but we should constantly be trying to achieve that on a daily basis [because] that translates into the guest’s experience.”

Current trends in the restaurant scene have de-emphasized the fine dining experience from coast to coast. For many chefs and restaurateurs, in the stead of a pursuit for Michelin stars is the pursuit of a casual space that serves fine dining-quality food. By doing so, the trend removes some price and access barriers to high cuisine, but also forgoes the staples of service that had defined the experience of getting that food. Some like it, some don’t.

Royster says that’s fine — the casual places are where he eats — but his goal is still classic fine dining.

“I do want to own my own restaurant, maybe restaurants,” Royster says. “I’ve always had this desire since I was 15, 16, reading about The French Laundry, Thomas Keller, three Michelin stars, right? I still have this passion for absolute perfection on the plate where it looks like a painting. I think it’d be an ultimate achievement. Whether it happens or not, I don’t know.”

The spoons’ll help. So will a lifetime of making it work. The reason Royster was able to start his career so young was because he dropped out of high school and moved out of his parents’ house when he was 16. That forced Royster to grow up fast.

“Yeah it was weird, I’m going to be honest,” Royster says. “I went to the gas station 100 feet down the road and that’s where I used to get most of my food. I got home from work and I’d go down and get a box of Hot Pockets and I’d be good. So it was interesting… kind of an uprooting and bam! I had to change from being a kid into being an adult immediately, which I think was good. It worked out just fine.

“Had it turned in a different direction, I’m sure I’d be saying something completely different.”

Plenty of people work hard and don’t accomplish in a lifetime what Royster has managed to pack into a decade. You have to wonder: does he possess some unique natural ability with food, or has he just worked hard and gotten some good breaks?

“I think that it’s a little bit of both. I think you need to have a natural ability of understanding restaurant work and how it goes,” Royster says. “I think it also comes down to the fact that [there are] people who have a desire to continue to push and people who are happy with where they are. In order to grow, you have to have a desire to continue to push. You have to push yourself more than the person above you is pushing, otherwise you’re not going to go anywhere.”

Indeed, it’s in Royster’s blood to move. That may mean he’ll physically have to get to a bigger city if he wants to pursue those Michelin stars. But for the kid who left academics for the kitchen because he had “to be doing something,” the next steps will likely come quick and be filled with many more oddly shaped spoons.

For more of our conversation with Royster, listen below.