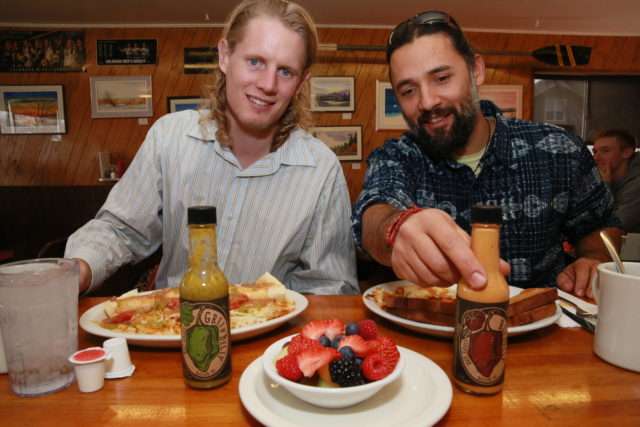 The last thing I want to taste is any hot sauce, whether it’s local, organic, vegan or made by a Broncos player. I’ve been burned before. After judging one salsa and hot sauce competition in Longmont, I endured gastric consequences and an inability to taste anything. That capsaicin overdose and a need to protect the buds cured me of the need for excess culinary heat.

Nonetheless, I was intrigued when I heard about the Guatemalan-inspired green and red hot sauces made by Boulder’s Green Belly Foods. The 3-year-old company is run by cousins Charlie Stewart — raised in Boulder — and Juan Stewart, who grew up in Guatemala. Both are University of Colorado grads;  and I’ve known them since they were kids because Charlie was a next-door neighbor to my family.

“I was living in California working for a wine company and driving for Uber when Juan called. He was making Green Belly Hot Sauce at home and everybody loved it. He wanted to know how to turn it into a meaningful business,” Charlie says. He moved back to Boulder and initially the duo made the sauces between midnight and 6 a.m. in the kitchen of Illegal Pete’s. They make, bottle and label the sauces, and sell them online and at farmers’ markets by sampling them with corn chips and their scratch-made super-smooth black bean dip.

That said, I was still a little terrified to taste the sauces cooked up by these millennial entrepreneurs.

I initially just pressed a finger to the Green Belly Hot Sauce bottle taking the tiniest possible sample to taste. What a relief. Instead of a beast, a one-note blast of heat or the typical Tabasco-type taste, this sauce has an appealing herbal taste that comes from large amounts of puréed organic cilantro and garlic. The sauce has some tartness from apple cider vinegar with a pleasant mouthfeel from extra virgin olive oil.

Yes, there’s some heat but it’s not hurtful despite the addition of puréed habanero chilies grown in part by Charlie’s dad, Carl, at his home and more than 600 other habanero plants in Longmont. Friends, customers and neighbors help keep the plants alive all winter in their homes.

The Red Belly Hot Sauce is something else entirely: a craveable, hot, smoky sauce with a wonderful creamy texture from olive oil, roasted tomatoes and garlic. The distinctive heat is provided by Guatemalan cobanero peppers. It’s the best thing to happen to leftover Thanksgiving dark turkey meat since mole sauce.

“Part of our mission is to connect people in the U.S. with Guatemala, to build a bridge, and to support indigenous Guatemalan farmers. We are one of the few companies importing cobanero chilies from Guatemala,” Charlie says.

Next up for the company is developing a yellow hot sauce using another type of pepper, and finding ways to import other Guatemalan foods. The sauces are available at Lucky’s Market, Alfalfa’s Market, the Peppercorn and other local stores as well as online. They will also be at the season-ending Boulder County Farmers Market Winter Market in Longmont on Dec. 2 and 3.

Frankly, I wish Green Belly Hot Sauce and Red Belly Hot Sauce weren’t labelled as “hot sauce” and relegated to the shelf with hot sauces with names like “Scorpion” and “Killer.” These are table condiments, not flame-throwers.

Stem Ciders’ new 200-seat Acreage restaurant is set to open in January at 1380 Horizon Ave. in Lafayette, overseen by Boulder chefs Daniel Asher of River and Woods and Kelly Whitaker of Basta. The facility includes a 5,000-square-foot cidery and an apple orchard. … Louisville-based Door to Door Organics has ceased delivering organic and natural produce and groceries. The pioneering 20-year-old company was known for supporting local farmers, strong environmental responsibility and fighting hunger by donating to food banks, including about 600,000 pounds of organic and natural food in 2017. … It’s always good news when a new pie place opens nearby. Ginger and Baker is open in a pie wedge-shaped renovated grain mill at 359 Linden St. in Fort Collins that includes a market, bakery, coffee bar and teaching kitchen. … Instead of gathering at the Village Coffee Shop, old friends can now meet for intravenous fluids at Onus iV, opening at 1827 Pearl, above Cured and Boxcar Coffee. The menu ranges from a simply seasoned hydrating saline drip to the specialty John Myers’ Cocktail, a zesty blend of B vitamins, vitamin C, calcium and magnesium. … The Museum of Boulder is hosting  a conversation Dec. 6 at 2000 21st St. in Boulder with the extraordinary Gerry Leary, owner of The Unseen Bean Cafe. Blind from birth, Leary was a car mechanic for decades before learning to roast coffee by the aroma and sound of roasting beans. museumofboulder.org. … Plan ahead: After a successful inaugural event this summer, Slow Food Nations returns to Denver July 13-15, 2018.

Take a karak break during the holiday hubbub to visit Amira Sweets, tucked away in a South Denver strip mall just off I-25 at 4101 E. Evans Ave. The comfortable new coffee shop specializes in authentic Middle Eastern sweets including a roster of baklavas made with thin, buttery filo sheets and flavored honey in cashew, walnut and pistachio variations. The star is kanafe, a pastry with a creamy sweet layer topped loosely with toasted ultra-thin vermicelli noodles glazed with honey. They go nicely with a chai-like karak tea infused with cardamom and cinnamon. The shop is a few doors down from Amira Grill, a Lebanese eatery known for fresh, hot and pillow-y pita.

“I can cook, but nothing that’s too fancy. My specialties are frying eggs, bacon and ham.” — Elvis Presley

John Lehndorff is the former bluegrass music and dining critic of the Rocky Mountain News. He talks about food at 8:25 a.m. Thursdays on Radio Nibbles on KGNU (88.5 FM, 1390 AM, kgnu.org).