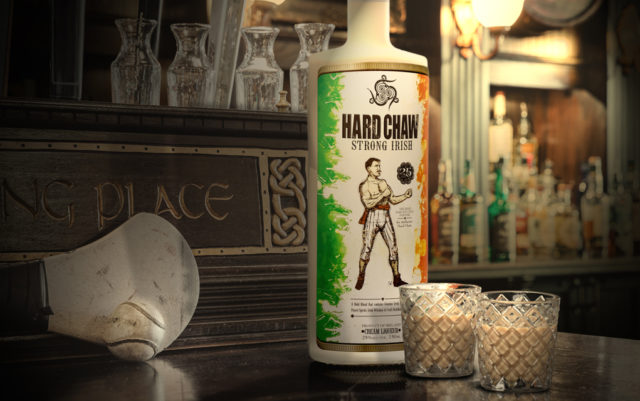 Though everything in Colm O’Neill’s Hard Chaw Strong Irish Whiskey was made in Ireland — the fresh Irish cream, the whiskey and the poitín (Americanized as potcheen), an Irish moonshine — the story of how it came to be is rooted in Boulder.

O’Neill was at the tail end of 18 years operating Conor O’Neill’s, an Irish pub in downtown Boulder (in the building which now houses Steakhouse No. 316). Over the years, he and his bartenders had poured thousands upon thousands of Irish car bombs  — a pint of Guiness into which a shot of Bailey’s Irish Cream and Irish whiskey is dropped, and then chugged.

“We were selling hundreds of these car bombs every night, and it was kind of impractical for a bartender to grab the Bailey’s and grab the whiskey. So what would happen is we’d go to the back room, we’d have to come in early, and just mix maybe 10 or 20 bottles of whiskey and Bailey’s into individual bottles,” O’Neill says.

That innovation led to a business idea: “Wouldn’t it be great if this was just a premade shot?”

So O’Neill worked with a Boulder chemist to figure out how to make a hard Irish cream. Bailey’s clocks in at 17% alcohol by volume, and conventional wisdom was that you couldn’t make an Irish cream stronger without making it non-shelf-stable or otherwise taste bad. For two years, O’Neill and the chemist worked to find a composition that worked, trying everything from dozens of brands of non-dairy creamer to alternative milks like coconut and almond.

“We were able to get a version that had 25% ABV, that tasted good, looked good, but it was kind of a bit on the thick side,” O’Neill says, like paint — thankfully, the consistency was soon thinned out.

With recipe in tow, O’Neill went to an Irish manufacturer, where, just like in the U.S., there are strong connotations about Bailey’s — that it’s not consumed by itself and that it is not meant to be a hard beverage.

“He was bemused by the idea, you know, because it’s just an accepted fact that Irish cream is 17%, so why would you want 25%? And I said, ‘Well, we’ve got this drink in the States…’”

About that drink, the Irish Car Bomb — a college bar staple because it’s, well, delicious, gets you messed up and is fun to drink. But the name, which refers to the “Troubles” of religious and political violence in Northern Ireland in the latter half of the last century, has always been controversial, certainly among anyone who was affected by it.

“By any measure, it’s an offensive term,” O’Neill says. “But, to me, it’s a term that’s more used in kind of ignorance than anything else. There’s no intent, you know?

“What we’ve talked about is seeing if we can work with a stout manufacturer and just come up with a different term entirely, like a Chaw bomb or an H bomb or something like that.

“A term like [car bomb], I don’t know, I would think it could go away as fast as it as it showed up.”

Now that the Hard Chaw production process is complete and it’s showing up in a growing number of stores and bars, the hope is that buyers and bartenders will, yes, use it in the cocktail of its origin, but that it can also serve as a shot or a liquid dessert, due to its higher alcohol content.

O’Neill still owns several Irish pubs in South Denver and beyond, but he says the venture into spirits has been a welcome change.

“The nice thing about this is, ‘Hey, let’s do a smaller batch and see if it works and scale it up. And if it doesn’t work, let’s get the hell out of there,’” O’Neill says. “I suppose from a purely business perspective, that’s one of the things that’s interesting about the whole restaurant thing is you’ve got every penny committed and you have no idea [if you’ll be successful]. You just don’t have a clue, and you’re just praying that it’ll work. And also the hours are better.”

O’Neill is at peace with the closure of Conor O’Neill’s in Boulder, even though his first Colorado pub was the sight of many good memories, for its patrons and for O’Neill himself  — he remembers when his youngest son was born on St. Patrick’s Day, how he spent his first evening on Earth in a safe spot under a table at Connor O’Neill’s.

But operating a restaurant in downtown Boulder? O’Neill does not miss that.

“There was an element of it kind of running its course,” O’Neill says. “How most of the places in downtown Boulder survive… I’m a CPA and it’s beyond me. It’s just so much harder in the likes of Boulder to make money when you don’t own the property.”

Though Conor O’Neill’s is but a memory for us in Boulder, we might be able to taste a bit of its glory days in a glass of Hard Chaw.