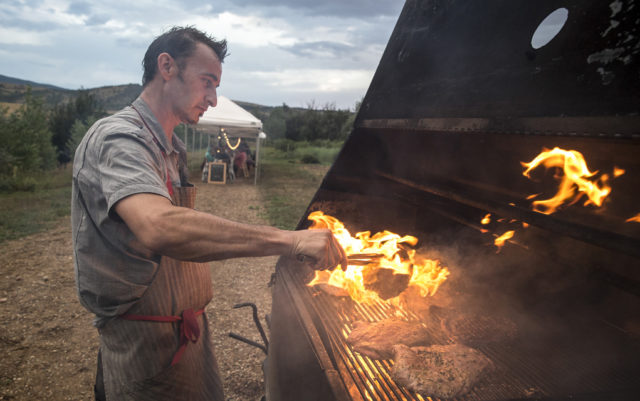 Picture a tomahawk steak: a cut of marbled rib-eye beef bigger than your hand and thicker than your wrist with a white bone scraped clean, bigger than your arm, curving away from the meat and off the plate. It resembles, of course, a tomahawk ax, which was used by Native Americans mostly as a weapon, and mostly to kill Europeans.

Take it from a European: The tomahawk cut of meat kills them, too. Alberto Sabbadini says when he came to Colorado from Italy in 2000, at age 28, his perception of food was drastically altered by the seemingly aggressive, almost war-mongering, way Americans ate. The tomahawk ax wasn’t even the weapon Sabbadini first associated with the steak.

“The amount of beef people are eating is ridiculous,” he says. “Even like calling a steak a tomahawk, like a missile. How can you call a steak a missile?”

Sabbadini — executive chef at Colorado National Golf Club, chef at Meadowlark Farm Dinners and co-founder of the Boulder Butchery Guild — says a lot of funny things about American cuisine, and our perceptions of Italian food.

“Garlic bread? What is it? Like, is this Italian?” That’s what Sabbadini said when he first learned garlic bread was a traditional American complement to pasta. “That was, for me, shocking. To be considered Italian food, garlic bread… Our garlic bread you can toast it and then scrape it with a little garlic and that’s as far as you go. Maybe a little oil. It’s not butter, Parmesan cheese, parsley and garlic, and then it’s in the oven. And then to dip with a side of ranch? Like, dip?”

Sabbadini, mind you, says this all with a laugh. He’s not picking on American cuisine as much as he is pointing out the funny juxtapositions to his own upbringing in a bucolic village in Friuli, Italy. Whereas meat, poultry and fish come mostly pre-butchered and sometimes frozen to U.S. restaurants and groceries, Sabbadini grew up hunting wild hog, deer and “little birds that you can now not catch anymore.” Every winter, the neighbors gathered together and Sabbadini’s father or uncle shot one pig in the back of its head with a rifle and hung it to dry, using a bucket to catch the blood for use in sausage. They broke down the pig, reserving some for a fresh meal, while taking the remaining muscles and organs to cure and make sausage. At some point, they’d break out sausage from the previous winter.

Whereas many restaurants rely on food deliveries from big suppliers like Sysco and Shamrock, Sabbadini remembers his father coming home with a basket of cherries too big to fit his arms around. He had traded for it. On business trips near the sea, his father would trade wood to artisans for fresh fish — a tank of live eels, boxes of fresh sardines and cuttlefish, and, one time, a 60-kilogram tuna. Whether it was business or everyday community trading, bartering was part of life.

“Giving like a few salami or some wine or helping trim the grapes… that’s a payback, like trading. That is incredible,” he says. “You keep that in your heart. It doesn’t go away.” 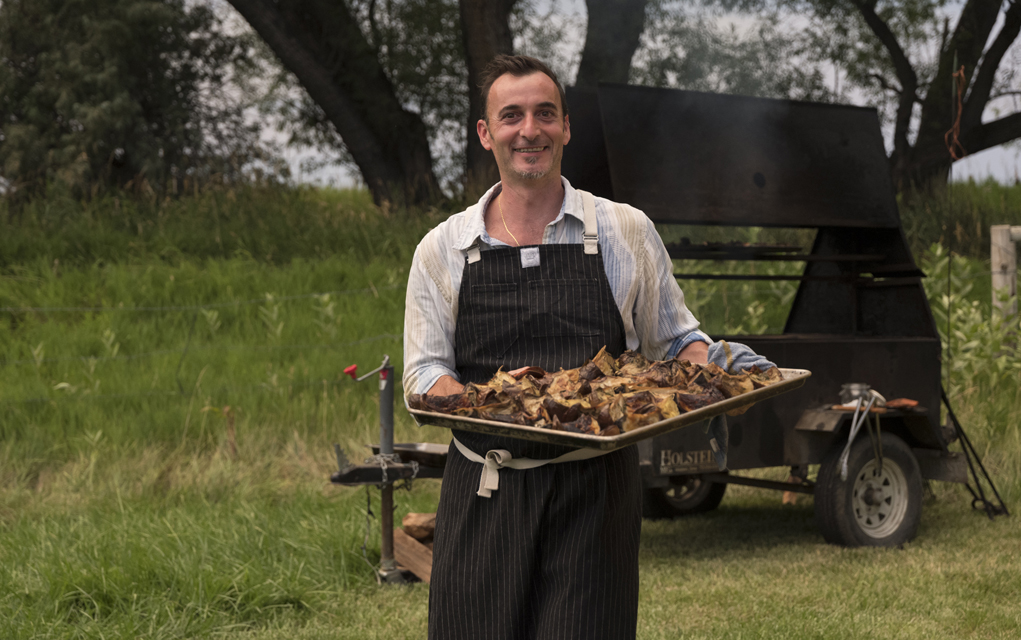 “There was always someone at home; coming for a coffee in the morning, or [my mother would say] ‘I make a cake, come in the afternoon,’ another coffee, and then maybe friends on my father’s side, you open a bottle of wine, then you’re pulling out the salami, and it’s always thinking about food,” Sabbadini says. “And everyday, my grandma, she was living with us in Italy, and actually at night, at dinner, [she’d say,] ‘What are we cooking tomorrow for lunch, what will we have for dinner?’”

That’s an intimate lesson Sabbadini is trying to impart to his family here in the U.S. His two daughters have a “fairy garden” in which they plant vegetables and edible flowers. His youngest daughter attends the Waldorf School in Niwot, which Sabbadini says “is a big sacrifice for me,” but he says it’s important for kids to, say, bake bread and eat it warm with butter, and then to spend three or four hours outside as they do at the school.

Though we may not have the natural abundance of produce as Friuli, nor the historic culture to support a bartering system, nor the educational system to foster that care of food, Sabbadini believes we can remedy those issues with our food culture if we start young — and if adults who truly value this way of living commit to sacrifices; if they, say, cut their gym visit 10 minutes short or leave work on time.

“Sometimes I have to stop [working] and say, ‘I’m home for dinner tonight. We eat all together.’ Even if I cook all day long,” Sabbadini says. “Then we’re sitting down, which I try to teach my daughters is important. Right now they’re small and it’s a good way to learn. Like, ‘No, we’re sitting down, we’re closing the computer, sitting down.’”

Sabbadini is also trying to bring those values directly to the food scene in Boulder County. He works with local producers to procure meat of the quality his family could obtain in Italy — from Clint Buckner of Boulder Lamb, for instance. Hosting farm dinners enables Sabbadini to use first-cut vegetables and expose hundreds of diners every year to the difference between farm-fresh produce and store-brought produce. His butchery classes give students tools to break down pigs, lambs, chickens and produce sausage — artisanal skills that otherwise would be lost, he says.

For all this talk, the proof is in the risotto, as it were: the food Sabbadini produces is beautiful. Think cubes of fresh melon with charred shishito peppers, mint and a dollop of chèvre; or, blanched asparagus stalks with violet sage blossoms, shaved parmesan and brown butter; or, porchetta-style roast lamb, rolled with herbs and garlic with a crispy fat bark.

Although simple Italian food can make the transition to America, maybe three- or four-hour lunch breaks shared with neighbors and business partners over wine and coffee and grappa may never take hold in the U.S. And though Sabbadini says he’d like his children to experience the Italian way of life, he also recognizes that his former countrymen, too, have gotten caught up in the pursuit of something beyond the simple life, to potentially culture-shocking effects: As Italy and other formerly cash-based European economies turn to credit cards, it’s the country’s artisans and system of local trade that faces the greatest risk.

“We’re trying to copy the American Dream, and they don’t realize it’s not very good, honestly. Yeah, you can have everything you want. You can have a million-dollar house and then you have to pay it and if you don’t pay it, they eat you alive. You are on the street, not even,” he says.

Sabbadini says Italians, though historically risk-averse, tend to follow trends, and the abundance of credit means more people have cars and thus have more access to malls, which are proliferating. Whereas there used to be a local butcher, dairy farmer, baker, druggist, etc., in each village, now Italians are going to superstores.

But if the problem started here in the U.S., maybe the answer is here, too. Sabbadini, along with all the other folks trying to change our culture through food, are keen to find out.

“I know we need to act,” Sabbadini says. “In my little world, I think I’m acting.”